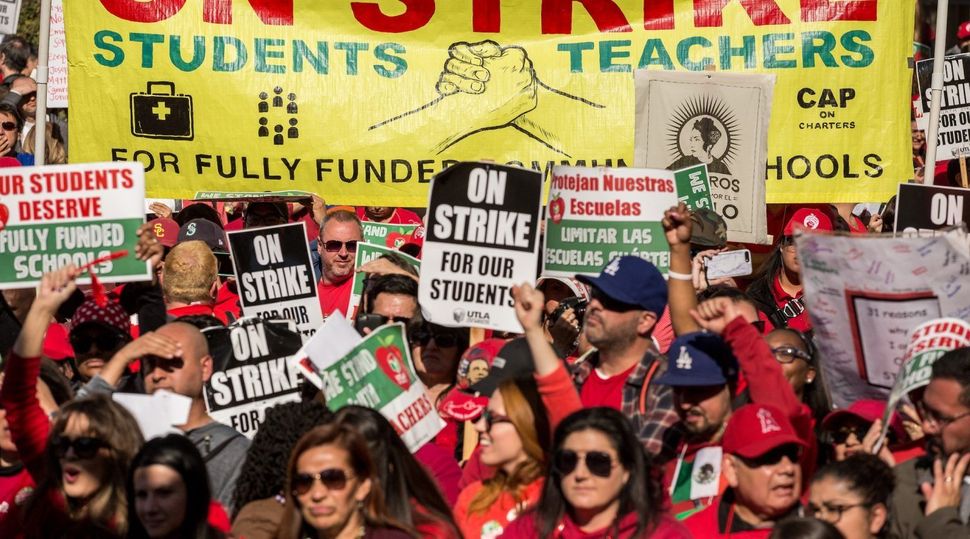 Members and supporters of the United Teachers of Los Angeles union wave and cheer in a downtown Los Angeles park at the end of a strike, Jan. 22, 2019. In September 2021, the union will vote on a controversial resolution to back the Boycott, Divestment and Sanctions movement targeting Israel. Photo by Scott Heins/Getty Images

(JTA) — Public school unions in the U.S. are increasingly becoming a hotbed of Israel discourse, with the largest teachers’ union becoming the latest organized body to deliberate measures that censure Israel and support the Palestinian cause.

Members of the National Education Association at the group’s annual meeting held over the weekend (with President Joe Biden and first lady Jill Biden, a longtime educator, in attendance) planned to debate two items on Israel and the Palestinians among the more than 60 items on its virtual agenda. Both sought to make the union publicize some measure of support for the Palestinians and oppose the actions of the Israeli government in the wake of May’s outbreak of violence in Israel and Gaza.

The escalation of major debates on Israel and the Palestinians within public education unions — many spearheaded by Jews on either side —  has included votes in San Francisco, Los Angeles and Seattle on whether to support the Boycott, Divestment and Sanctions movement. It’s also ensnared prominent Jewish labor leaders such as Randi Weingarten, president of the American Federation of Teachers, a longtime BDS opponent (and critic of Israel).

Union representatives say it is their duty as organized labor bodies to weigh in on issues of global import such as Israel, but their dual status as educators has contributed to an atmosphere of fear and uncertainty among both Jewish teachers and parents of Jewish public school children in their districts.

Pro-Israel organizations such as Hadassah, StandWithUs and the Zionist Organization of America have rallied against these proposals, including last week’s NEA votes. Hadassah’s national president, Rhoda Smolow, told the Jewish Telegraphic Agency that the group searched its own member list to find people who may be, or know, NEA delegates to encourage them to vote against the items. A list of talking points circulated by the pro-Israel groups called the items “one-sided, divisive” and “directly at odds with NEA’s principles of inclusivity, diversity, and fostering diverse viewpoints.”

Ultimately one of the two items was defeated, while the other did not come up for a vote before the NEA’s debate time for new business items expired at the conclusion of the virtual meeting on Saturday. A separate item calling for the NEA to advocate for mandatory Holocaust and genocide education also did not have a vote**. **(Unlike in years past, when every new item would be debated, this year the NEA restricted debate time due to the virtual setting.)

The Conference of Presidents of Major American Jewish Organizations, an umbrella organization representing dozens of American Jewish groups, issued a statement commending the NEA for its “rejection” of the items.

“It is important to ensure that our educators and education system do not take actions that could fuel the recent rise in antisemitism in the United States,” the Presidents Conference said.

Neither NEA item about the Palestinians mentioned the BDS movement, which calls for exerting financial pressure on any businesses or organizations with ties to the Israeli government. NEA bylaws dictate that any resolution calling for a boycott must be referred to the union’s executive committee.

But BDS has been in the air as the Israeli-Palestinian conflict has become a flashpoint of the American labor movement, public education unions in particular.

In May, United Educators of San Francisco voted to support BDS — the first K-12 teachers’ union in the country to do so. Labor historian Jeff Schuhrke, who teaches at the University of Illinois at Chicago, described the resolution as “the most visible support for Palestinian people that we’ve seen from the U.S. labor movement ever.” Writing in the socialist publication Tempest, a UESF member said the BDS resolution was pushed by their newly formed activist caucus within the union.

The Seattle Education Association followed suit in June with its own successful BDS resolution.  The Cholent, a newsletter covering Jewish Seattle, reported that neither SEA leadership nor Seattle Public Schools made any announcement about the vote, and that union members who advocated for the resolution appeared to be associated with End the Deadly Exchange Seattle, an activist group devoted to ending partnerships between U.S. law enforcement and Israel.

In September, United Teachers Los Angeles will vote on a similar resolution. Higher-education unions at schools such as Rutgers University and the City University of New York have also held recent votes favorable to the BDS movement.

Some Jewish teachers and parents in the San Francisco Unified School District have said they felt unsafe after the union’s BDS vote. The local Jewish Community Relations Council and the Anti-Defamation League pushed back against the resolution, and Jewish and non-Jewish parents expressed their concerns during a San Francisco school board meeting on June 8.

In Los Angeles, at least one Jewish member of the teachers’ union resigned over the pending resolution, saying “I feel unsafe as a Jew.”

Other labor unions have also taken forceful pro-BDS stances in the weeks following the recent violence in the region. In June, the Vermont State Labor Council AFL-CIO voted to endorse a statement from Labor For Palestine, a pro-BDS group, and in Oakland, the local longshoremen’s union sided with anti-Israel protesters who blocked an Israeli-owned cargo ship last month.

The Oakland boat boycott was on the mind of Tania Kappner, an NEA delegate who teaches high school English in the city, when she authored New Business Item 29, which pushed the NEA to “call on the United States government to stop arming and supporting Israel and Saudi Arabia.” Israel was committing “ethnic cleansing,” the item also said.

The other Israel-related item debated by the NEA, New Business Item 51, sought “to educate members and the general public about the history, culture, and struggles of Palestinians, including the detention and abuse of children in the Occupied Palestinian Territory.”

Combined, the two items sought to earmark a combined total of $77,000 for Palestinian causes, which was revised from an earlier sum of $214,920. For a vote, an item must be submitted by at least 50 delegates, but it doesn’t become NEA policy until the formal vote is held.

“I think a lot of people who support public education around the nation, in the world, are looking to us to take clear stands for justice on these international issues,” Kappner told JTA. She said she is especially passionate about ensuring that displaced Palestinians can attain refugee status.

Kappner, who said she is not religious, disagrees with critics who say measures like hers can foster unsafe environments for Jewish educators.

“I think the best way to fight antisemitism is to stand up for Palestinian rights and equality,” she said. “I think it’s really important that people stand against Zionist policies in order to make sure that Israel is not set up as a death trap for Jewish people and Palestinian people.”

The two Israel-related items were authored independently of each other, Kappner said, but she said she had been in touch with the other author, delegate Rahaf Othman of Oak Lawn, Illinois, upon realizing they had similar aims. (Othman did not respond to an interview request from JTA.)

Kappner has proposed many similar items at NEA annual meetings in years past, according to Jewish labor advocates, and her items usually attract little notice or support. But the combination of the all-virtual setting, the addition of a second pro-Palestinian item to the agenda and heightened concerns in the Jewish world about recent spikes in antisemitic activity threw this year’s vote into greater uncertainty and opened it to involvement from outside groups.

Big names in the Jewish world have become involved in similar union disputes.

Jonathan Greenblatt, CEO of the Anti-Defamation League, has publicly lobbied Weingarten to come out against any pro-BDS resolutions in AFT-affiliated education unions. (The San Francisco and Los Angeles unions are AFT- and NEA-affiliated; Seattle’s union belongs to the latter group.)

Other Jewish and conservative groups wanted Weingarten to take more drastic measures, such as overturning the resolutions in San Francisco and Los Angeles while implementing antisemitism training at the affiliates.

In a June 14 letter to Greenblatt that was provided to J. The Jewish News of Northern California, Weingarten said that while she and the American Federation of Teachers remained opposed to BDS, they would not intervene with pro-BDS decisions made on the local level.

“We believe strongly in dialogue, debate and the free ability to express a range of viewpoints,” she wrote, adding that “the national union does not override locals over differences or questions of policy.”

For some longtime Jewish labor organizers, the debate over the resolutions is a frustrating reminder that many Jews only pay attention to organized labor when Israel is involved.

Arieh Lebowitz, executive director of the Jewish Labor Committee, told JTA that he believes the organized Jewish community “unfortunately, increasingly only looks to unions as a source of ‘tsuris’ [grief].”

“99.9 percent of the work the NEA does has absolutely nothing to do with contentious resolutions,” Lebowitz said. “But who’s concerned about that?”

Lebowitz also said he believes that the spate of BDS votes in education unions reflect the beliefs of only a small number of active union members. He does not think teachers in the BDS-supporting local chapters “will be looking at Jewish students with any suspicion or hostility.”

Nevertheless, Lebowitz and his organization, which aims to serve as a bridge between the organized Jewish and labor communities, helped NEA’s Jewish Affairs Caucus oppose the pro-Palestinian items.

“There are people within the Jewish community, both organizations and individuals, who are very concerned about these resolutions,” he said. “They think they are part of the floodgate that’s opening up.”

That concern was reflected as well within the NEA’s Jewish Affairs Caucus, but members were still uneasy about the union’s debate spilling over into public view.

“It’s a mixed bag,” Patrick Crabtree, chair of the caucus, told JTA about the newfound attention being paid to the union. “What I am glad about is that for once, I’m seeing our Jewish NEA members finally getting involved.”

Crabtree, a retired teacher and Jew by choice who lives in Mobile, Alabama, said the caucus opposed the items because it recognized that many of its more than 60 members found the language antisemitic. Though the caucus has successfully lobbied against similar resolutions, Crabtree said this year’s debate had the effect of turning off some Jewish educators from the NEA.

“A lot of people say ‘I’m not going to belong to an organization that doesn’t support Jews or Israel,’” Crabree said. “Oh, please don’t do that. That’s not good for helping anything. Be a part of an agent of change, to make it better.”

This story was reported with the help of J. The Jewish News of Northern California and Emily Alhadeff of *The Cholent.

The post Major teachers’ unions are pushing the pro-Palestinian cause — and receiving major pushback appeared first on Jewish Telegraphic Agency.