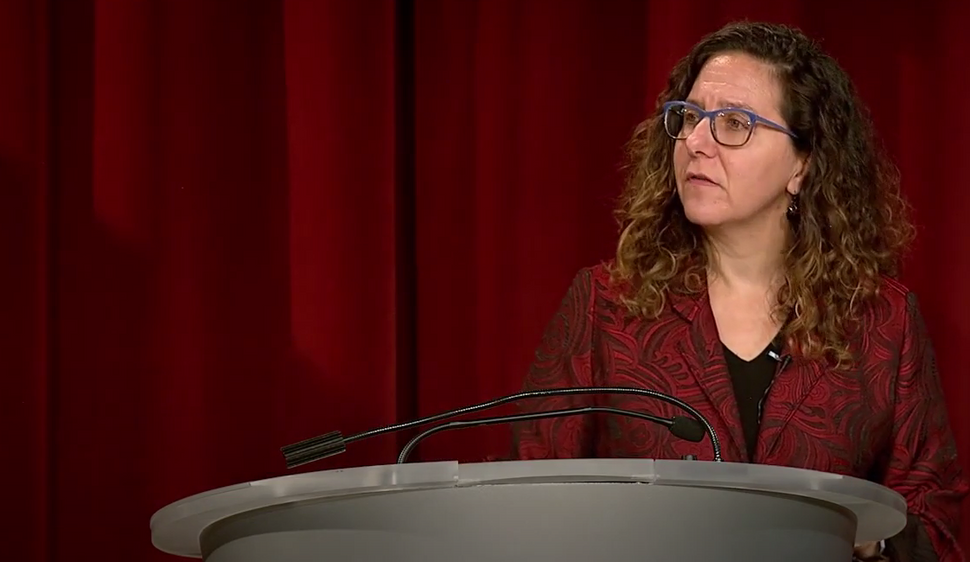 It wasn’t long before many of the group’s goals began to be realized. Joe Biden made diversity a key election promise, picked Kamala Harris as his vice president, and women now make up 60% of the White House staff and a similar proportion of the president’s agency appointees. One of the leading voices in that fight, Tamara Cofman Wittes, was nominated on Monday for a senior post on Middle East affairs.

The announcement of Wittes as Biden’s choice as the U.S. Agency for International Development’s assistant administrator for the Middle East, which requires Senate confirmation, spread like wildfire on Twitter and garnered heaps of praise from Congress members, national security experts and media personalities.

Wittes, a senior fellow at the Brookings Institution and former director of the Saban Center for Middle East Policy, is a staunch advocate for gender diversity in national security and the U.S. think tank community. In an op-ed for The Washington Post in 2015, Wittes called out the dearth of women from Middle East policy debates. “The vast gap between the large number of senior women in our field and their notable absence from our public discourse means it’s time for active steps to fix the latter problem,” she wrote.

Evelyn Farkas, a former Pentagon official in the Obama administration, told the Forward that Wittes is particularly good at conceptualizing plans in a way that makes others want to join her.

She is “very good at making her points and expressing her opinion, but she does it in a way that’s very collaborative and she’s very well respected by all of us,” said Farkas, who made an unsuccessful bid for New York’s 17th Congressional district last year.

And while Wittes’ nomination is being hailed as a victory for women in foreign policy, those who know her and the field say it is primarily her experience and moral standing that earned her the nomination.

Shibley Telhami, a Palestinian-American professor at University of Maryland and a nonresident senior fellow at Brookings, first met Wittes, 51, through a project at the Middle East Institute after Wittes graduated from Georgetown University in 2000. The two later worked together at the United States Institute of Peace. “From the outset,” Telhami said, “I have been impressed by her thoughtfulness and judiciousness on issues that generate considerable emotions in our public discourse.”

Wittes in 2003 joined the Brookings Institution, where she researched and wrote about democracy, individual rights and humanitarian aid at the Saban Center for Middle East Policy. She served as deputy assistant secretary of state for Near Eastern affairs in President Barack Obama’s first term, and returned to Brookings in 2012. Wittes was one of the first recipients of the Rabin-Peres Peace Award, established by former President Bill Clinton in 1997.

Nathan Sachs, who succeeded Wittes as director of the Center for Middle East Policy in 2017, described her as a “relatively rare blend of someone who is very consistent and devoted to principle, and has a very clear moral voice, while also being able to look at the world very pragmatically and to deal productively with almost anyone.”

An active Twitter user, Wittes has called out gender inequality as she commented on women’s rights, democracy and the Middle East, including the Israeli-Palestinian peace process and Israeli politics. Despite her criticisms, Sachs said, she is able to maintain relationships with people representing a range of views. During her time at Brookings, Wittes organized the once annual Saban Forum, which hosted dialogues between American and Israeli leaders from across the political spectrum, as well as other events relating to Israel and U.S. relations with the Arab world.

At the USAID, where the primary focus is to distribute humanitarian resources to poor and developing countries and provide disaster relief, Wittes will be responsible for overseeing the agency’s programming in the Middle East. The agency, headed by former U.S. Ambassador to the U.N. Samantha Power, has a higher profile now that its head is a cabinet-level position.

Wittes will also be in charge of implementing a new international fund to facilitate joint economic ventures and promote dialogue between Israelis and Palestinians. The fund, which authorizes $250 million in spending over five years, was secured by the passage of bipartisan legislation known as the Middle East Partnership for Peace Act of 2020

Martin Indyk, former ambassador to Israel, who hired Wittes in 2003 to serve under his direction at the Saban Center for Middle East Policy at Brookings, said on Tuesday that Wittes’ deep knowledge of the conflict and strategic perspective will give her the ability to strengthen civil society and promote democratic change in the region, and to use the fund to preserve a two-state solution.

Wittes declined to be interviewed for this article.

Last year, she co-authored a lengthy report that offered a new strategy on how the U.S. should handle the Israeli-Palestinian conflict with Ilan Goldenberg, a former Obama administration official, and Michael Koplow from the Israel Policy Forum. The three wrote that while former President Donald Trump one-sided approach veered away from longstanding policy, the more even-handed efforts of previous administrations “also failed to produce lasting peace, and a simple return to those policies will not succeed.” The authors proposed steps to address the humanitarian crisis and economic challenges Palestinians are facing in the West Bank and Gaza while managing the conflict and preserving a two-state outcome in the future.

Farkas, who worked with Shapiro in the Senate before joining the Obama administration, predicted that Wittes would help boost support for Israel within the Democratic Party and articulate how Biden’s policies on the Middle East would protect Israel while promoting peace and democracy.

Dan Shapiro, former U.S. ambassador to Israel who was senior director for the Middle East at the National Security Council in the first two years of the Obama administration, called Wittes an “inspiring leader who has “an incredible intuition for the human impact of these programs, the way they change the lives of the women and girls, boys and men, and societies they touch.”

Wittes and Shapiro wrote a joint opinion piece in 2018, reacting to a Pew survey that showed deep partisan divides on U.S. policy toward the Israeli-Palestinian conflict. The pair suggested that Israeli leaders should commit to keeping the two-state solution alive and viable for the future to retain a strong consensus on Israel.