Not sorry enough? U. Wisconsin apologizes, but does not change plan to start classes on Rosh Hashanah 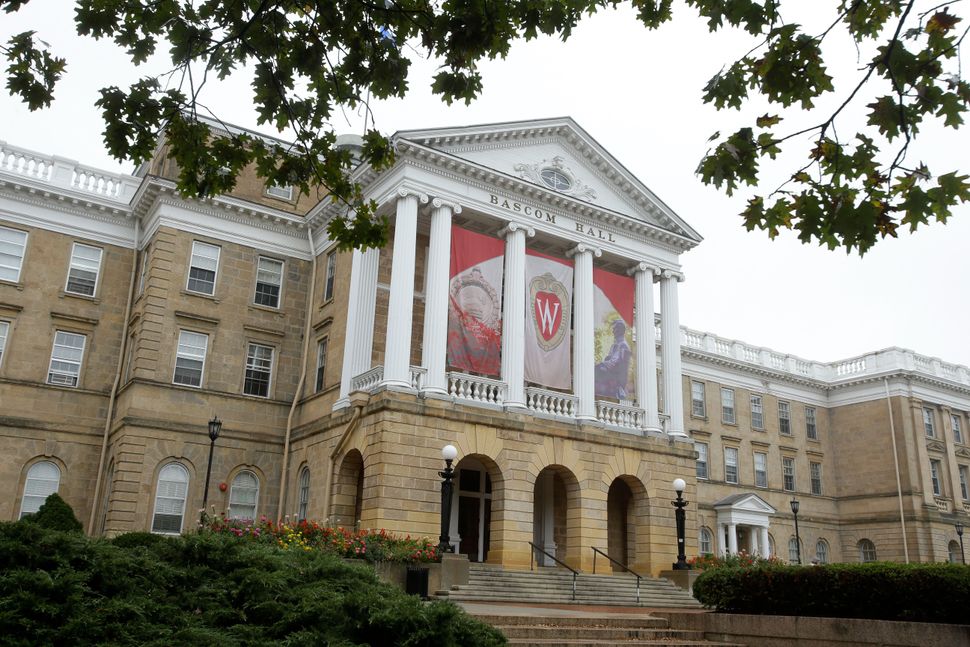 Jewish students at the University of Wisconsin-Madison will have to choose between school and shul. By Mike McGinnis/Getty Images

Sophomore Anna Glassman is looking forward to returning to the University of Wisconsin-Madison this August, but not the first day of school in September. She’s one of many students who must choose between going to class and observing Rosh Hashanah, thanks to the university’s decision to make the first day of school Sept. 8, the final day of the holiday.

“It’s anxiety provoking having to decide right at the start of school between my religion and my studies. And it feels like nobody else at Wisconsin really understands what’s going on besides the Jewish community,” Glassman said.

UW-Madison is one of six in the 13-school Wisconsin system that scheduled classes to begin on Sept. 7 or Sept. 8, the first and second days of the Jewish New Year. The decision puts many of the more than 4,000 Jewish students and faculty in an uncomfortable position. On Tuesday, UW-Madison became the first school to apologize for the conflict, though UW-Parkside officials also said they plan to issue an apology.

“I recognize that the scheduling conflict and our failure to anticipate it when the calendar was adopted by the Faculty Senate in 2019 has distressed many Jewish students, their families, faculty, and staff, particularly at a time of increased anti-Semitic violence and harassment across the U.S.,” Chancellor Rebecca Blank wrote to the university community.

Faced with a decision to choose class or the holiday, Jewish students are approaching the school vs. shul dilemma in different ways, often depending on whether they usually observe the second day of the holiday. Professors take their own planned observances into consideration, but may also weigh how the decision to hold or cancel class will affect Jewish students.

“Students who need to miss the first day of classes will be at a disadvantage and will need to catch up. It may take them longer to figure out their schedule if they are trying out several classes. They may think it makes a bad impression to not show up on the first day.”

‘It is an insult’

Greg Steinberger, CEO and president of UW Hillel, first reached out to university officials in December. A series of meetings with the administration ensued. Letters from Hillel, local faith groups and a slew of Jewish organizations also urged the university to move the start date.

“This conflict, while we understand is unintentional, falls short of our shared ideal in doing our best as an institution to be a ‘welcoming and inclusive community for people from every background’” that UW-Madison aspires to, the letter from Hillel read.

Several groups pointed out that in a similar instance in 1994, the Wisconsin legislature passed a bill allowing a one-time start date on Sept. 1 to avoid the start of classes on Rosh Hashanah. It was signed by former Gov. Tommy Thompson, who is now the president of the University of Wisconsin system.

“Jews in general, regardless of their religious practice, are accustomed to coming to places where they have a conflict with holidays,” Steinberger said. “But the fact that it’s the first day is really disturbing. I think that the consensus view is that it’s just not OK, and I would say the first day in the year coming out of a pandemic, where some people are going to be in a mourning situation will be particularly painful.”

Still, the universities reiterated over the past six months that federal and state reporting requirements, student financial aid packages and complex information systems are pinned to the start and end dates of the academic term, making it too late to change the date, which was chosen five years ago.

Blank has tried to ease frustrations, and wrote a June letter that UW-Madison is moving as many activities as possible in regards to conflict. The date for Convocation was moved from Sept. 7 to Sept. 3, as were departmental outreach and new student events. Residence hall move-in was also shifted two days earlier.

Blank also wrote that the university — where the reporter of this story is a student — is working to ensure the conflict is not repeated again: a new group has been created to oversee the academic calendar.

Michael Blumenfeld, executive director of the Wisconsin Jewish Conference, said he thinks many Muslim, Catholic and Lutheran faith groups came to support the Jewish community because they recognize that the calendar conflict is bigger than just at UW Madison.

“What’s happening with the Rosh Hashanah conflict is a symptom of a much larger concern. It is an insult, it’s disrespectful, and I think it gives pause to all religious minorities. There should be policies in place that recognize the diversity of our society and talk about inclusion and this doesn’t do that,” Blumenfeld said.

Go to class or go to shul?

The calendar conflict at UW-Madison is the latest in a series affecting Jewish college students. The University of Minnesota will start its fall semester the same day as the Wisconsin schools.Columbia University originally made its start date this fall the first day of Rosh Hashanah, but then moved it to Sept. 9. Dartmouth University’s move-in dates conflicted with Passover this spring.

Though Rosh Hashanah was originally celebrated as a one-day holiday, the time it took for news of the Jewish religious court, the Sanhedrin, to announce the sighting of the new moon varied, prompting a two-day observance as a safeguard. Today, while many observant Jews still celebrate the full 48 hours, a majority of Reform synagogues don’t offer a second day of services.

At UW-Madison, with the Sept. 7 start date falling on the second day of the holiday, the calendar conflict may be most distressing for the school’s smaller observant community, said Rabbi Mendel Matusof of Madison’s Chabad-Lubavitch, who is anticipating 300 to 400 students to attend event Chabad-Lubavitch hosts following services and Shofar blowing around campus. .

“I think that it’s the most observant students that struggle with it the most,” said Matusof, who is anticipating 300 to 400 students to attend their BreakFast, which Chabad-Lubavitch hosts following services and Shofar blowing around campus. He said this year’s calendar conflict has highlighted issues Jewish students have long experienced.

“People are shining a light on the experience of being an American Jewish college student where it’s very challenging despite the fact that there are religious accommodations, which aren’t nearly as helpful as they could be because there’s still a tremendous amount of pressure on the students,” he said. “I’ve seen students struggle with this every single year, it’s just that no one ever pays attention to it when it’s the third or fifth week of classes.”

Aitan Meyer, a Chabad executive board member entering his Junior year, echoed that his observance as a Modern Orthodox Jew puts him in a somewhat different position than his less religious peers, who may more easily choose to observe some parts of the holiday but still attend school. Meyer’s frustrations led him to write a letter to school administration about the conflict; over 300 people have signed on to it.

“The fact that the UW-Madison administration made the decision to have the first day of school on a major and widely celebrated, and widely known Jewish holiday, is baffling, disheartening, and begs the question of whether Jews, and their religious observances, no matter how large or picayune, are of importance to the school’s administration,” he wrote.

Meyer himself has not yet decided what he’ll do on the first day of school, but if he goes to class, he will only sit and listen, he said.

Many less observant Jewish students are nevertheless frustrated by the class vs. shul dilemma. Glassman, who is in Jewish sorority Sigma Delta Tau, said if she goes to school, it will be the first time in her life she’s sat in a classroom instead of a synagogue on Rosh Hashanah. To help make the decision, she’s going to check in with her peers.

“I think people are kind of waiting around to see what everybody else is going to do, just because if we’re all missing the first day of class together it’ll feel like we have more of a community behind us,” Glassman said. “You never know how a professor is going to react when you say you’re missing the first day of school for a holiday; they might assign something or punish me for not attending, so I have to hope that I’ll have professors that understand the situation.”

Not sorry enough? U. Wisconsin apologizes, but does not change plan to start classes on Rosh Hashanah