The cyberattacks began in May following the outbreak of fighting between Israel and Hamas in the Gaza strip this spring.

Months after the ceasefire, they are still targeting Avlaremoz, an alternative Turkish Jewish web magazine.

The media outlet has been sustaining consistent “denial-of-service” or “ddos” attacks, in which a website is bombarded with thousands if not millions of input requests, overwhelming and usually crashing it.

“Two days ago, we had fifty million inputs trying to get inside.” Avlaremoz’s co-founder, Eli Haligua, told the Forward. “Yesterday again they attacked, when it will finish, I don’t know.”

Haligua doesn’t know for sure that the attacks on Avlaremoz are the work of the “IBDA-Cyber Front, which has taken credit for hits on other Jewish media outlets. IBDA, which is considered a terrorist group by Turkey, the U.S., and the European Union is the Turkish acronym for a movement known in English as “the Great Eastern Islamic Raiders Front.”

It follows the ideology of Turkish Islamist and nationalist writer Necip Fazıl Kısakürek who advocates for the reestablishment of the Islamic Caliphate and the creation of a federated Sunni state covering the whole Middle East.

Before its website was attacked, it was also the subject of a Tweet: “You will not be able to cover up your Islamophobia under the guise of ‘anti-Semitism.’ WE ARE IN YOU, real and virtual!”

Avlaremoz was founded in 2016 by young Turkish Jews who had participated in the 2013 Gezi Park anti-government protests that roiled Istanbul. It aimed to provide Turkish Jewry with a platform not available to them within the establishment media and placed a particular focus of monitoring antisemitism in the country.

Other Jewish media outlets have suffered cyberattacks after violence erupted in Israel and Gaza this spring.

Şalom Gazetesi, a Turkish language weekly, was hacked in late May by a group that called itself “IBDA-Cyber Front.” During the hack, Şalom’s homepage was replaced with an image of the Palestinian flag and a boy with slingshot alongside a poem excerpt by Fazıl Kısakürek and the message. “Our actions will continue until Palestine is free and independent!” 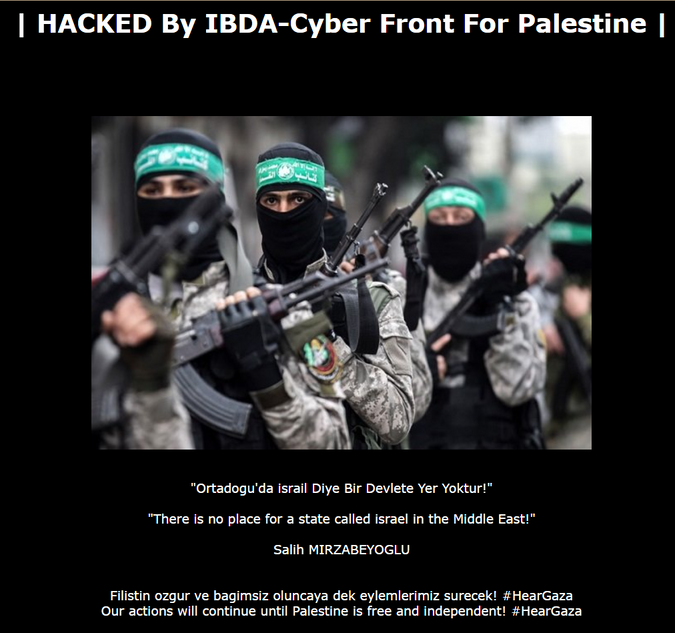 How a webpage looks when it’s been hacked by IBDA.

Founded in 1947, Şalom is the flagship media outlet of Turkish Jewry and publishes weekly in Turkish, with one page in Ladino.

“In these black days, whenever there is an Israel-Hamas war, the people of the Turkish Jewish community already don’t feel safe due to the rise in antisemitism on social media,” Ivo Molinas, editor-in-chief of Şalom, told the Forward. The hijacking of the main media outlet covering the community only increased anxieties.

According to IBDA’s own media outlet, Baran, the group followed their attack on Şalom with one on Hebrew.School, an online directory of Hebrew Schools in the U.S. and Canada.

“Every day one of you, one day all of you…” the group reportedly threatened on Twitter.

At Avlaremoz, its editor wonders whether a cyberattack coincided with the outlet’s publication of a series of articles on the 1934 Thrace pogroms, an antisemitic campaign prompted by Turkification attempts which ultimately lead to the exodus of 15,000 Jews from European Turkey.

Haligua isn’t sure if the articles incited the hackers, or if it was just a coincidence.

“I don’t know when it will stop,” he said, “If they can’t hack into the website, so they get angry and try to keep on blocking-up the system. It’s kind of a war. They attack, they wait a bit and attack again.”

A Google search of IBDA-Cyber Front’s Turkish name showed many other sites still occupied with the group’s banner and message, including an Israeli iridology clinic.

Since their founding in 1970, IBDA has claimed credit for numerous attacks in Turkey, including the 2003 Istanbul bombings, in which truck bombs were simultaneously detonated outside two Turkish synagogues. The attack killed 28 people, including six Turkish Jews.

However, intelligence analysts do not believe that the group has the capabilities which they claim, and responsibility for the 2003 attacks have generally been attributed to Al-Qaeda. Whether IBDA provided on the ground support or intelligence to Al-Qaeda remains unclear.