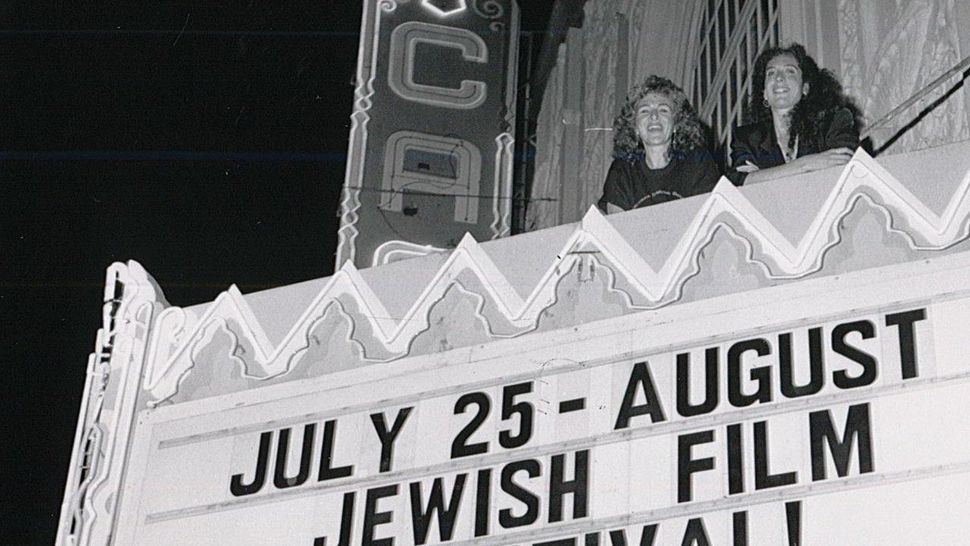 San Francisco Jewish Film Festival co-directors Deborah Kaufman and Janis Plotkin in 1991 on the balcony of the Castro Theatre.

Just a few years ago, at a gathering of filmmakers during the annual Berlin Film Festival, I was asked by a perplexed newcomer to the festival scene why the oldest and largest Jewish film festival in the world took place in, of all places, San Francisco.

As a native-born San Francisco Jew and a former executive director of the now 41-year-old San Francisco Jewish Film Festival (SFJFF) – which this year streams nationally through August 1 at www.sfjff.org – I was tempted to reply, in very Jewish fashion, “And why shouldn’t it be in San Francisco?” But I had to admit: it’s a very good question.

Despite San Francisco’s deserved reputation as an engine for cultural and technological innovation and as an extraordinary tapestry of diverse ethnic communities, the city has usually been held up as the poster child for Jewish assimilation, not tribal exceptionalism. It’s a reputation long in the making: from the very establishment of the “instant city” during the California Gold Rush of the 1850’s, San Francisco’s Jews – arriving on relatively equal footing with their Christian neighbors – were so adept at assimilating into mainstream civic life that they never isolated into identifiable “Jewish neighborhoods,” and many (including some of my own forebears) gleefully adopted customs from outside the faith: cremation, Christmas trees, oysters at wedding banquets. Hence the institutions San Francisco Jews built and the contributions they made tended to be secular, benefiting the wider city and not solely the Jewish community: they became mayors, business leaders, philanthropists and civic pillars even in the 19th century. 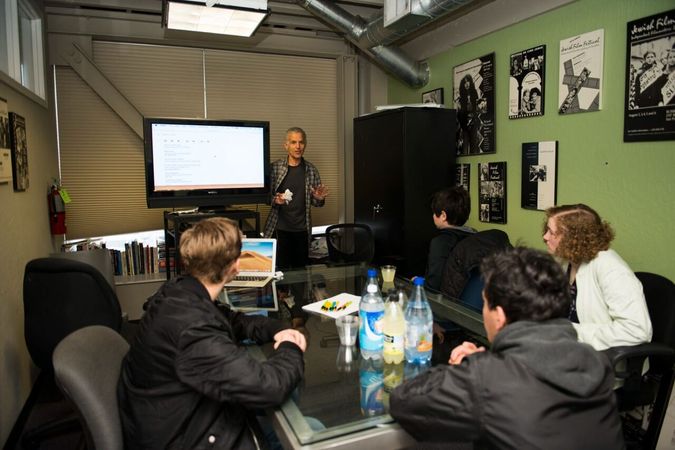 That assimilation continues today: San Francisco Bay Area Jews have among the highest rates of interfaith households in the country—a recent study found that 2/3 of Jewish adults in the Bay Area between 18-34 years old were married to non-Jews—a condition conventionally seen as a symptom of fragmenting (rather than diverse) Jewish identity.

So it seems counterintuitive that San Francisco would be the birthplace of what we can now see as a worldwide Jewish cultural movement: the Jewish film festival. But indeed in 1980, a young filmmaker and activist named Deborah Kaufman organized the first such event in the world—naming it simply “the Jewish Film Festival”—and presented ten films in a small theater in San Francisco’s Mission District. It captured a zeitgeist, and the festival has continued to be produced without interruption for four decades (a streaming festival during COVID notwithstanding), attracting some 40,000 attendees each July to screen more than a hundred films from across the globe that address, and question, the Jewish experience. The San Francisco Jewish Film Festival sparked an explosion of Jewish film festivals in nearly every community and country where Jews can be found.

So why San Francisco? In fact, the very same diverse, assimilated and questioning nature of San Francisco—as both a cultural nexus and a Jewish community—provided the necessary ingredients that gave rise to the festival in the first place, and which continue to form the essence of its position today as a leader in the field of identity-based media.

Deborah Kaufman came of age in the Bay Area in the 1960’s and early 1970’s, at a time when radical political activism and ethnic solidarity movements were shaping the lives of a generation of students on Bay Area campuses. At San Francisco State University, student protests in 1968 had led to the formation of the nation’s first freestanding College of Ethnic Studies, while the ongoing anti-Vietnam and civil rights activism at UC Berkeley forever linked the fates of its sizable African American, Latino, Asian American and Jewish student populations.

At the same time, a new generation of Bay Area filmmakers, rejecting the commercial emphasis of Los Angeles, were establishing film collectives, art-houses and alternative media outlets in the Bay Area to support a new wave of politically engaged filmmaking. Young artists were discovering the power of media—especially documentaries—to express new ideas about what it means to be a minority in America. 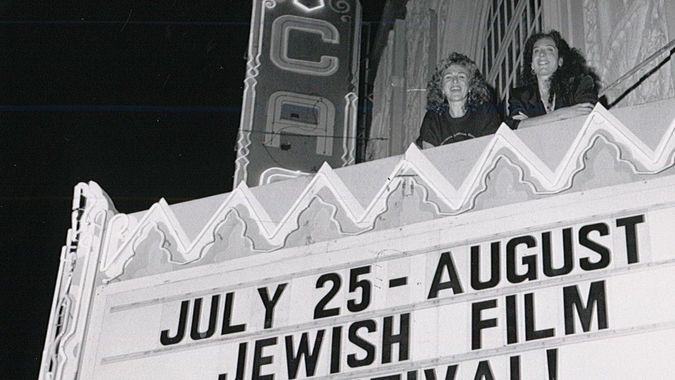 San Francisco Jewish Film Festival co-directors Deborah Kaufman and Janis Plotkin in 1991 on the balcony of the Castro Theatre.

These young and emboldened communities of artists and activists started to show their films to one another as a way of not only sharing their work, but finding and building a sense of community. The “identity-based” or “culturally-specific” film festival was born out of this atmosphere as a social, political and cultural phenomenon: a self-defining, self-reflecting incubator for newly conscious constituencies. Thus it is no coincidence that the very first gay film festival took place in San Francisco in 1977, followed in quick succession by Jewish, Asian American, Latino, women’s film festivals and many more…most of them the first, or at least among the first, of their kind.

In the case of the Jewish Film Festival, however, there was another important dimension that defined the mission. As Kaufman would come to describe it, the Jewish Film Festival was started as “an intervention”: Kaufman (joined in the second year by Janis Plotkin, who between them led the festival for its first 22 years), did not see reflected in traditional American Jewish life, or in Hollywood’s stereotyped depiction of Jews, the diversity and complexity that they felt defined their generation’s dynamic Jewish identity.

Since the end of World War II, American Jewish life had largely been defined by the twin poles of the Holocaust and the foundation of the State of Israel; but in San Francisco, the large population of unaffiliated and to some degree marginalized young Jews did not see their political concerns—or even themselves—reflected in American Jewish institutions, media outlets or synagogues.

The Jewish Film Festival was established first of all as a cultural corrective: presenting a range of imagery—including films about the Sephardic and Mizrahi experience, about relationships between Blacks and Jews, about feminist Jews, gay Jews and Jews of color, films that addressed Israel’s relationship with its Palestinian neighbors, and films that focused on stories of Jewish resistance and activism during the Holocaust, beyond victimization—in other words, films that presented counter-narratives to prevailing and often sacred points of view.

The electricity generated by this intervention, and the joy it seemed to bring to generations of “outsider” Jews who finally were finding themselves on the screen and in the audience, became the great defining strength of the festival, and its numbers and influence grew. SFJFF’s directors, staff and volunteers began helping other communities build similar festivals (not always with the same sense of activism, which was in some ways unique to San Francisco), even publishing a tip-sheet for starting your own film festival (Jewish or otherwise), and later a book-length guide to independent Jewish film—a function now served by a robust online archive.

In their first decade, SFJFF’s organizers began raising enough money to travel annually to the Berlin Film Festival, bringing new Jewish voices from across Europe and the Middle East back to hungry Bay Area audiences. At home, the festival grew to screen in four locations, eventually adding year-round screenings, a winter festival, a distribution arm, a youth filmmaking program, and becoming itself an important training ground and informal film market for the growing field of independent Jewish film.

A standout event in which SFJFF proved its role as a powerful cultural intervention came in 1990, when it organized a groundbreaking festival in Moscow, just before the dissolution of the Soviet Union. Drawing some 60,000 participants and overcoming tremendous logistical and political obstacles, the Moscow festival became the single largest Jewish cultural gathering in the history of the Soviet Union. But SFJFF’s cultural activism often met with mainstream Jewish resistance at home: the Moscow festival was opposed by groups supporting the rescue of Soviet Jews, while two years earlier, the festival faced outrage and funding cuts when it invited Palestinian peace activist Mubarak Awad to participate in a post-film panel in San Francisco.

In fact, over the four decades of the festival, one can practically chart the rise and fall of American Jewish anxiety, especially around the Israel-Palestine conflict, by measuring the ferocity of criticism lobbed at the festival’s programming choices. In the mid-1990’s, in the rosy optimism of the Oslo Accords, the festival presented films celebrating the overlap of Israeli, Palestinian, Iraqi and Mizrahi cultures, showcased films made by Palestinians, and enjoyed community collaborations with the Bay Area’s Arab Film Festival.

These programs were generally greeted warmly (if sometimes warily) and rarely drew significant opposition. During my own eight-year tenure at the festival, which happened to coincide with the second Intifada, Israel’s 2006 Lebanon war and increasing concerns about antisemitism and anti-Zionism on American campuses, the vehemence of criticism from Jewish conservatives amplified into outright culture wars across the country, targeting Jewish theater companies, museums, Jewish community centers and, specifically, the SFJFF. These cultural presenters were increasingly pressured to retreat from offering programs and speakers perceived as divisive to Jewish solidarity or overly critical of Israel.

Ironically, this backlash was happening amidst an unprecedented flowering of Israel’s film industry, whose powerful dramas (often dark) and sophisticated documentaries (often highly critical of Israel’s status quo) were forming an important piece of SFJFF’s annual program. These tumultuous tides intersected in 2009 at SFJFF’s screening of an Israeli documentary about the American anti-occupation activist Rachel Corrie, and the festival’s invitation to her mother to engage in a Q&A after the film. The event erupted into months-long angry calls for boycotting the festival and eliminating its funding, and counter-demonstrations supporting the principles of open debate in Jewish life—a controversy that went viral in new waves of social media outrage.

But even though the fault lines in the Israel-Palestine conflict will likely continue to be reflected in community response to festival programs, it’s important to point out how far we have come in the 41 years of SFJFF, in widening the notion of what a Jewish film is and what a festival can mean for community cohesion.

A look at most Jewish film festival websites and catalogs—among the hundreds across the world, from Hong Kong to Warsaw to Melbourne—will uncover films celebrating an extraordinary range of Jewish expression, from hip-hop and tattoo artists, to world-class Israeli chefs; you will find Orthodox dramas, Mexican rom-coms, lesbian comedies, Bollywood musicals and film school horror flicks that reflect surprising aspects of worldwide Jewish identities.

No longer can it be said, as the founding generation once lamented, that we can’t find ourselves on the screen. It is in no small part a credit to the visionaries who began, supported and sustained the SFJFF 41 years ago that the “Jewish film festival” today is a global cultural phenomenon. And thanks to them, looking back, we can say, of course it started in San Francisco.