What Jewish New Yorkers need to know about Kathy Hochul, who will replace Cuomo as governor 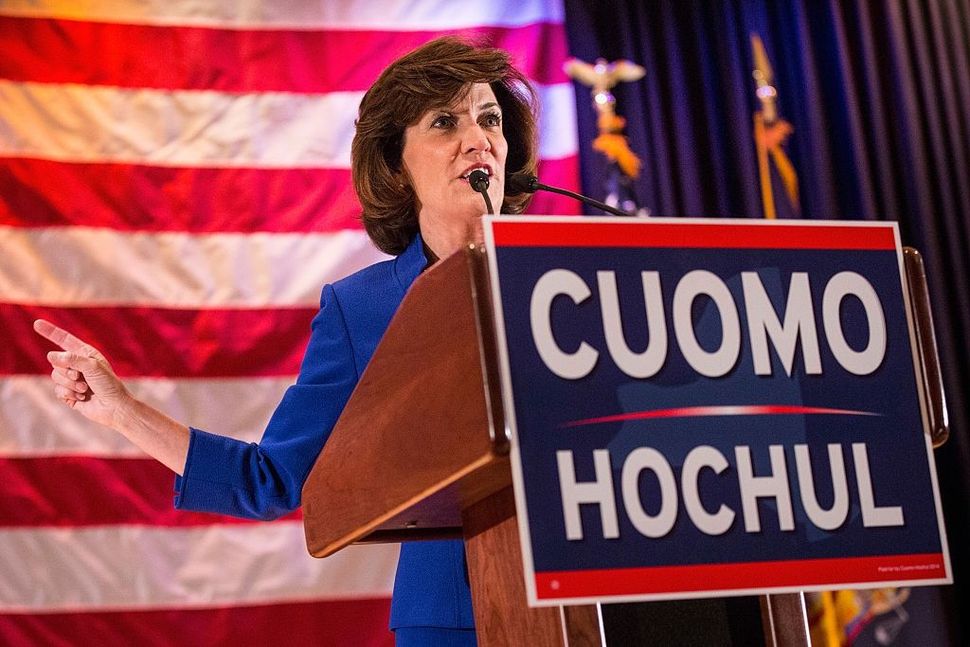 Kathy Hochul will take over as governor for Andrew Cuomo. Photo by Andrew Burton/Getty Images

(JTA) — (New York Jewish Week via JTA) — Kathy Hochul, who will succeed Andrew Cuomo as governor of New York, is no stranger to the New York Jewish community.

Cuomo resigned Tuesday, a week after a state investigation concluded that he sexually harassed 11 women. He had faced intense pressure to step aside, including from President Joe Biden, or face impeachment.

Cuomo enjoyed a warm working relationship with Jews across the denominational spectrum. As Cuomo’s surrogate, Hochul has made it a point to keep up with the issues and concerns of Jews, local leaders say, visiting Jewish day schools, meet regularly with Jewish community officials and touring Orthodox neighborhoods with local community leaders.

“We have brought hundreds and hundreds of students and activists to Albany [to meet her], and most recently – last March — she spoke at our virtual mission to Albany,” said Maury Litwack, the former director of state political affairs at the Orthodox Union. “And for years she has been speaking and addressing our leadership missions to Albany.”

Earlier this year, Hochul visited Jewish day schools in Brooklyn and Queens, touring the schools and meeting their leaders as well as community leaders, Litwak recalled.

A native of Buffalo, Hochul, who will turn 63 this month, was Cuomo’s running mate in 2014 and reelected in 2018. In New York, the governor and lieutenant governor are elected separately.

Hochul (pronounced hoe-kool) was among the first politicians to call out a recent spate of antisemitism in the state, in May 2019. When the number of antisemitic incidents nationwide began to spike that year, she convened a meeting in the city with Jewish leaders to address the situation and wrote on Facebook that “Anti-Semitism has no place in New York. ”

Among those at the meeting were David Pollock, associate executive director of the Jewish Community Relations Council of New York. The meeting demonstrated that “she is clearly sensitive to the issue and supportive of the community’s concerns,” he told The Jewish Week.

Rabbi Joseph Potasnik, executive vice president of the New York Board of Rabbis, also attended and said the meeting was just one of several times Hochul has reached out to the Jewish community.

“I have attended a number of meetings she conducted and I find it very important that she is an ardent listener,” he said. “That is a great quality. She wants to hear the concerns of Jewish leadership.”

Hochul has also visited the Yeshiva of Flatbush, a Modern Orthodox day school in Brooklyn. Its executive director, Jeffrey Rothman, said she has been a champion of state aid to private schools for the purpose of hiring qualified instructors to teach science, technology and math courses.

Devorah Halberstam, co-founder and director of External Affairs at the Jewish Children’s Museum in Crown Heights, Brooklyn, said she has “known Kathy for a very long time,” seeing her at meetings about antisemitism and when Hochul visited the museum.

A visit three years ago was followed a week later by her appearance at the annual event marking the anniversary of the 1991 Crown Heights riots, in which Black residents of the neighborhood, angered after a car in the motorcade of Lubavitcher Rebbe Menachem Mendel Schneerson accidentally struck and killed a Black child, attacked Hasidic Jews they encountered. A Hasidic student, Yankel Rosenbaum, was stabbed to death.

“I have found her to be very personable, in touch with what is going on and very aware of the different communities,” Halberstam said.

In the fall of 2019, members of the Crown Heights Jewish Community Council took her on a walking tour of their largely Hasidic neighborhood, including the Chabad Lubavitch movement’s headquarters on Eastern Parkway.

“She felt very comfortable being in our Hasidic community,” recalled Jacob Goldstein, a retired chair of Community Board 9, who accompanied her on the tour.

Married and the mother of two, Hochul holds a bachelor’s degree from Syracuse University and a law degree from Catholic University. She was an aide to Sen. Daniel Patrick Moynihan, and served as a member of the Hamburg Town Board and as clerk of Erie County.

As a Democrat, she won a special election in 2011 to fill the seat of Rep. Christopher Lee. Lee resigned after a photo of him shirtless was emailed to a woman he met on Craigslist and was published online.While in Congress, Hochul fought to protect the Affordable Care Act, reproductive rights and LGBTQ rights.

The district, representing Buffalo and Niagara Falls, was considered the most Republican in the state. Hochul lost when she ran again in 2012.

Hochul was essentially the governor’s representative when he couldn’t make it to an event, observed Ezra Friedlander, CEO of the Friedlander Group, a public affairs and public policy consulting group.

“She didn’t have an independent role but was an extension of the governor and the administration,” he said. “In the Cuomo administration she was not regarded as the go-to person when you wanted something done legislatively. … Although she was lieutenant governor, she wasn’t an insider and cannot be held accountable for the governor’s tsuris.”

But at the same time, she has used her position to travel throughout the state, visiting each of its 62 counties and attending various civic functions and getting to know community leaders.

“She knows what she’s doing,” Friedlander said. “For many years she has been waiting for this moment to be her own person. She is ambitious and wants to be governor. She has relationships she has built upon. It will be interesting to see if she can parlay that into her own term. … I think she will make a strong push to get elected in her own right. She will not go quietly into the night.”

After New York State Attorney General Letitia James released the results of her office’s investigation into Cuomo last week, multiple Democrats, including President Joe Biden, called on Cuomo to step down. The New York Assembly’s Judiciary Committee said it would hold hearings this month to decide if it will recommend that legislators move forward with impeachment.

—
The post What Jewish New Yorkers need to know about Kathy Hochul, who will replace Cuomo as governor appeared first on Jewish Telegraphic Agency.

What Jewish New Yorkers need to know about Kathy Hochul, who will replace Cuomo as governor