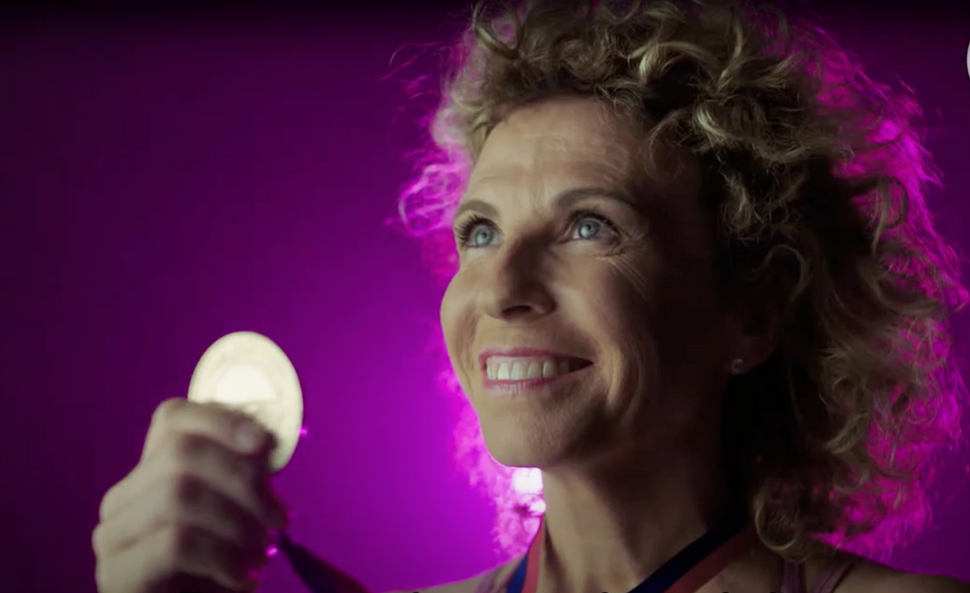 The first thing I noticed about Pascale Bercovitch was her energy. She all but glowed, although she said she was exhausted from trying to adapt to Tokyo time in advance of her flight to the 2020 Paralympics, which departed just a few hours after we spoke by video chat.

Bercovitch is competing as a kayaker in the 200 meter race. This is her fourth Paralympics and the third sport in which she has competed — making her, she said, one of only a few Olympic athletes to have competed in three different sports. She previously competed in rowing and handcycling, a sport that’s powered by the arms rather than the legs. The fact that she doesn’t have legs seems secondary to her powerful enthusiasm and will.

Now 54 and a mother to two daughters — Eden is 20 and Mica is 12 — Bercovitch is a well-known figure in Tel Aviv. In addition to being a competitive athlete, she gives inspirational lectures and is a frequent guest on television shows.

That would not have been the case in France, where Bercovitch was raised as a non-Jew, only discovering that her father was Jewish when she was 10 years old. As a teenager, Pascale was a local track-and-field champion in Angers, France, but a mediocre gymnast, she said. “I wasn’t on my way to becoming Simone Biles,” she laughed.

On her way to school one wintry day when she was 17, she slipped on ice at the train station and was pulled under a train, whose driver did not see her in the early morning gloom. The train amputated her legs at the thigh, which Bercovitch realized while waiting 47 long minutes for help to arrive.

She did not know if she would live or if she would die as the minutes passed, but she willed herself to stay conscious. “I didn’t have time to be terrified because it happened very fast,” she said. “I had this feeling that I had to stay very alert and put everything in that moment to survive. The 47 minutes I waited in the dark were an eternity.”

“Afterwards I felt very blessed that I had this opportunity to go through this time alone in front of the cosmos and felt a lot of things to keep breathing. It was an amazing lesson which changed my attitude toward life,” Bercovitch said.

Once in the hospital, the teenager had to learn everything anew: “How to sit up in the bed, how to cope with the way people were looking at me. It was different than before, when people saw a beautiful 17-year-old girl. Now I had no legs and people could not look at me twice. They saw no legs before they saw me.” Doctors told her stunned parents that she might be able to get a job with the phone company. Everyone acted as if she had no real future.

At the time, 37 years ago, people with disabilities were invisible in France, said Bercovitch. “You didn’t see someone in a wheelchair become a lawyer,” for example. “Disabled people were kept at home.”

The summer before her life-changing injury, and against her parents’ wishes, Pascale had gone to volunteer for the Israel Defense Forces in its Sar-El program, which enables overseas residents to work on an army base for a few weeks or months at a time.

Six months after losing her legs, still just 17 and not knowing any Hebrew, she returned to the Sar-El program, where she at first filled storage boxes and eventually became an instructor for French and Belgian volunteers. “I had nothing to do in France. I had no future there.”

She arrived in Israel with the equivalent of $100 in her pocket and, according to Bercovitch, was the first person in a wheelchair to serve in the Israeli army

Bercovitch had felt called to Israel soon after learning that her father was Jewish. Once she went, she knew she was meant to be Israeli. “France is a very old country with old principles and habits. Nobody changes,” she said. “I thought this world has to be dynamic, has to change, and that since Israel is a very young country that I could do it there. I was right.”

“When I’m in Israel everybody’s asking how I feel, how they can help. Young people here are an amazing generation. They are not afraid. You can be older, younger, different, yellow, pink, they are not afraid of differences. They know they can do anything — grow, discover, invent, have ideas, trying and failing. They are children of the big world.”

She has seen how much attitudes toward people with disabilities have changed in the decades since her injury. “Before when people looked at me it was with shock and pity. Today people look at me as a human being. I’m a public figure here in Israel and they like the values I’m bringing in. They don’t pity me. I am a happy person. On the contrary, they want my autograph.”

And today the Israel Defense Forces has divisions for people with the full range of physical and cognitive disabilities, so that everyone who wants to serve can.

When Bercovitch was 20 she officially converted to Judaism. After leaving the IDF, she became a journalist focusing on disability-related topics, and started making documentary films. She has made three — including one on the Israeli delegation at the 2000 Paralympic Games in Sydney, titled “Three Hundredths of a Second.” She was also training in mountain climbing and rappelling, which is how she met her partner, Oz Skop, who is a climbing coach.

Bercovitch was invited by the Israeli Paralympic team to train for and compete in the 2008 Beijing games as a rower, although she had never before participated in that sport. She did, but did not make it to the competition finals. In the 2012 Paralympic Games in London, Bercovitch competed in handcycling. Then she changed to kayaking, competing in the 2016 games in Rio, as well as the 2015 and 2017 World Paralympic Championships.

During the 2020 Tokyo Games, Bercovitch will compete on September 2 and 4. 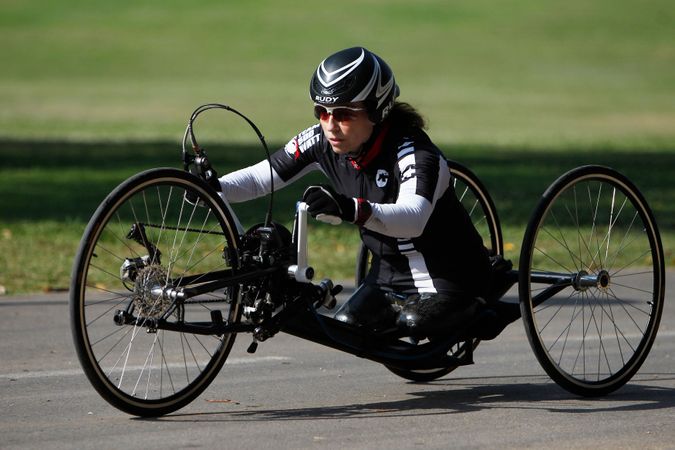 Pascale Bercovitch on a handbike in 2012. Courtesy of Wikimedia Commons

In her fifties, Bercovitch looks at least a decade younger than her actual age, with curls framing her face while she sits atop a sleek wheelchair. Her daughters peeked into the frame while we spoke. Eden, who currently serves in the IDF, has been given the elite status of athlete, which allows her to train twice a day as a kayaker in addition to her military duties. Mica said hello, and Bercovitch showed me the little stuffed animal her younger daughter gave her to bring to Tokyo. It is a sloth — Bercovitch’s opposite. Their month-old kitten also makes an appearance. The tiny cat’s name is Tokyo.

Bercovitch had to bid farewell after our short interview. It was already late at night, Tel Aviv time, and she needed to finish packing and catch a few hours of sleep before leaving for the airport, on her own, at 3 am. Asked if she called for a wheelchair accessible cab, Bercovitch chuckled, saying that it’s not necessary. “In less than a minute I jump from the chair into the cab and fold up the wheelchair,” she said. “It’s all about core strength.”