He was sentenced to life in prison. Rescue dogs — and a rabbi — helped him find redemption. 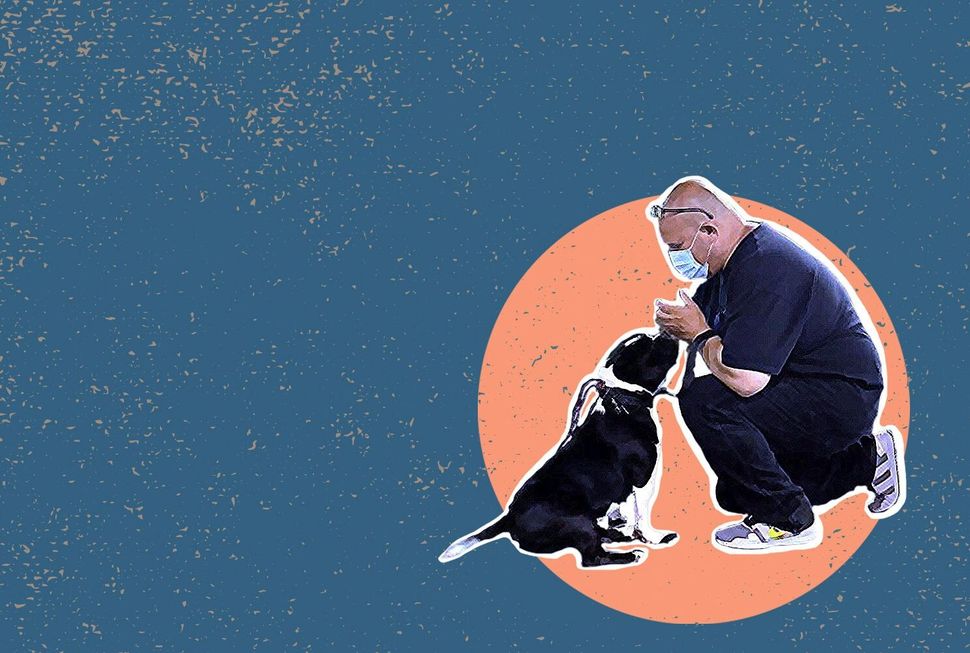 Jon Grobman kneels with a rescue dog that he is training as part of Paws for Life K9 Rescue, a nonprofit that brings dogs into prisons like the one where Grobman was incarcerated for 13 years. By Grace Yagel

VACAVILLE, Calif. (JTA) – Soon after Jon Grobman was released from prison, where he had once thought he would die, he headed back inside voluntarily — this time with canine sidekicks.

Grobman was returning as the newest hire of a nonprofit group, Paws for Life K9 Rescue, that had been instrumental in his own long and difficult road to redemption.

Grobman won’t easily forget the words of the judge who sentenced him to life without parole. “If I felt that you had any promise to ever amount to anything in your life, I wouldn’t give you this sentence,” he recalled the judge saying.

The takeaway, Grobman said, was that “he determined I had no value to anyone or anything in this world.” Sixteen years later, his voice still shakes from the memory.

Raised in a nonobservant Jewish family in the affluent Bay Area town of Hillsborough, California, Grobman had been in trouble for years. He’d begun experimenting with drugs at a young age, continuing as he struggled with emotional issues. When his parents sent him to a child psychologist as a teen, the doctor molested him (along with many other young boys, including several Jewish victims, over the span of decades).

Stealing to fund his drug habit into adulthood, Grobman continued to get in trouble with the law. In 2005 he ran afoul of California’s “three strikes” law, which suggests a 25-years-to-life sentence for anyone convicted of three felonies.

But in prison, Grobman found a new lease on life. With the help of a local Chabad rabbi, he rediscovered his Judaism; and, with the help of some four-legged friends, he found an opportunity to practice teshuvah, or repentance.

“Of all the classes I took in prison, nothing impacted me more than one on victim sensitivity awareness,” he said. “It connected to me to what people go through when they’re victimized. I started connecting the trauma that I went through to the trauma of those around me, and the trauma I caused others. I began thinking about what I can do with my life to make a difference in the lives of those around me, and began mentoring younger guys.

“I knew I was never getting out, but I could help them for when they did.”

In 2018, the extraordinary happened: After 13 years in prison, Grobman became the state’s first-ever beneficiary of a “Recall of Commitment” from the California Department of Corrections. Citing his exceptional behavior in prison and evidence that he would be a positive asset on the outside, the state recommended that he go free. Today, at 54, he is. 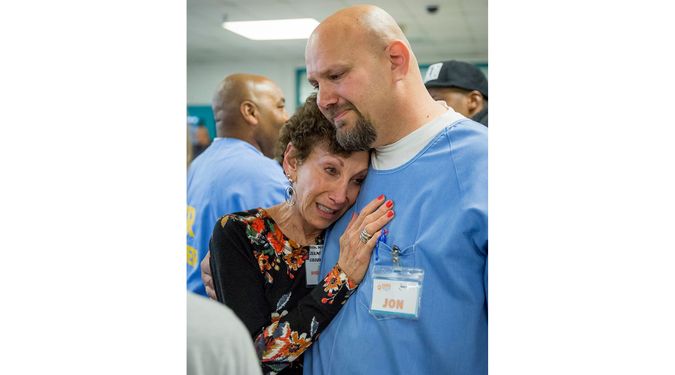 Jon Grobman hugs his mother, Diane Grobman, at a Paws 4 Life graduation ceremony, during which he first received the news that his own life sentence might be commuted. Courtesy of Rita Earl Blackwell

Since getting a second chance, Grobman feels he has been proving that judge wrong every single day — something that he says kicked into high gear when he became involved with Paws for Life. The Los Angeles-based nonprofit gives incarcerated men the chance to train rescued shelter dogs with behavioral problems who otherwise would be euthanized.

The group began in 2014 as an idea from prison leadership, which partnered with a local shelter. For the pilot program, the shelter’s operator, Alex Tonner, brought dogs into the maximum-security California State Prison, Los Angeles County, in Lancaster, California, at the behest of the prison’s warden. That pilot program worked with men who were a part of the prison’s so-called “Honor Yard,” reserved for lifers who have demonstrated a commitment to rehabilitation.

Grobman was among them. The story of that group, including Grobman, was recently featured in the short documentary “Shelter Me: Soul Awakened,” hosted by musician John Legend and broadcast on public television. Grobman was also in the 2015 HBO documentary “Toe Tag Parole: To Live and Die on Yard A.”

In prison, Grobman hid the fact that he was Jewish at first, but over time he befriended the only other Jewish man at Lancaster. Rabbi Joseph Lazar, the Jewish chaplain at the prison in Lancaster and director of the nearby Chabad of the High Desert, came once a week to wrap tefillin with him and teach him about Jewish history for most of his time there.

“In prison, he found his better side that was buried deep beneath all those layers that led him to be incarcerated in the first place,” Lazar said about Grobman. “Over time, he made his life about helping others. He really learned how to have compassion and empathy for others inside, and could really be a poster child for teshuvah.”

Grobman said learning with Lazar was inspirational. “We’re a resilient people, and learning about our history, I saw the connection to my own story,” he said.

His job in the prison captain’s office, running many of the prison’s rehabilitation programs, gave him a certain amount of power and protection, which allowed him to feel safe being “out” as a Jew, even among skinheads; he even became close friends with one of them, he said.

When he was approached to help start Paws for Life at the prison, he agreed. At first, it was hard to find 15 men willing to sign up, partially because they couldn’t believe dogs would be allowed into prison. Grobman ended up taking part, too; he was a natural at dog training, and eventually became the program’s leader. 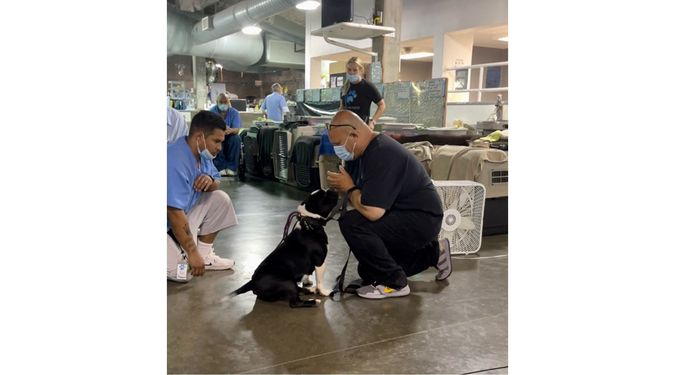 “Every person I was able to have an impact on erased more of what the judge said,” he said. “I realized how good it feels to help change someone’s life, and to play a role in guiding people in the right direction.”

It was clear from the outset that it wasn’t only the dogs who were benefitting.

Outside of the human-canine bond, “there is trust,” said Tonner, who today runs the program. “These animals come in with no judgment. The dog was caged, in a shelter, and wasn’t given opportunities, and the guys relate to them in that way. The dogs also make them vulnerable; they open up their emotions.”

Prison is “not an enriching environment,” Tonner said, “but they’re able to take this dog and enrich it in the ways they would like to be enriched and they take pride in that.”

The graduating dogs – hundreds have been trained by now — are then adopted into “forever” homes, with their trainers receiving regular updates about them. As men advance, some have learned how to train service dogs, particularly those that can be companions for veterans with PTSD.

As soon as it became known that Grobman was getting out, he was offered full-time employment by Paws for Life; he calls it his dream job.

As the group’s director of programs, he is in charge of bringing the therapeutic benefits he had once experienced to other men. So far, he has helped start the program in two prisons in Northern California: Mule Creek State Prison and the California Medical Facility. 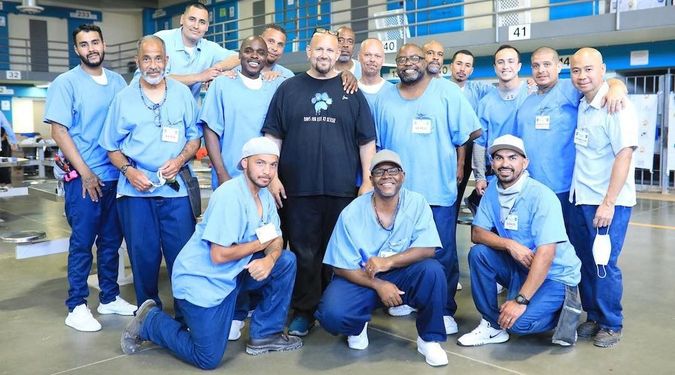 Jon Grobman (center) poses with a group of incarcerated men at California State Prison, Los Angeles County, in Lancaster. His own prison term behind him, Grobman now works as director of programs for Paws for Life K9 Rescue, which has incarcerated men train shelter dogs. Courtesy of Rita Earl Blackwell

Grobman still sees Lazar on his frequent visits to Lancaster.

“He’s obviously intelligent with excellent people skills,” said Lazar. “I’m quite impressed with how much he continues to give back. At every opportunity, he really goes out of his way to help others.”

During Grobman’s recent visit to the CMF in Vacaville, a group of men in prison blues showed off their charges: Tank, Panda, Hearts, Roger and Farrah Fawcett. Three trainers share a single dog, and they are always paired with trainers of different races so as to encourage interracial harmony.

“Working with the dogs can make me forget I’m in prison,” said Andrey Bernik, who identified himself as a Ukrainian Jew on his mother’s side.

“We are warehoused here, and for the most part, don’t have any way to give back to society,” said Chris Mann, who’s been incarcerated for nearly 30 years. “Most see us only as the last crime we committed, and not who we’ve turned into. Knowing that the dogs we trained will go to good homes allows us a chance to give back.”

Paws for Life says that, to date, 39 of its participants have had their sentences commuted. Many of them are now working with dogs on the outside. Not one has returned to prison.

“All this good that came from freeing Jon, helps free us,” said Eddie Davis, another incarcerated man at CMF. “In an odd sort of way, Jon found his passion and his purpose in prison. He could now probably be a corporate type, but he wouldn’t be anywhere as happy as he is now.”

How many of these men will be given a second chance to follow in Grobman’s footsteps is ultimately up to the governor and the parole board. But the numbers continue to grow, and his regular visits remind them that it’s possible.

“This is my community,” Grobman said. “I don’t want people to forget about them.”

—
The post He was sentenced to life in prison. Rescue dogs — and a rabbi — helped him find redemption. appeared first on Jewish Telegraphic Agency.

He was sentenced to life in prison. Rescue dogs — and a rabbi — helped him find redemption.