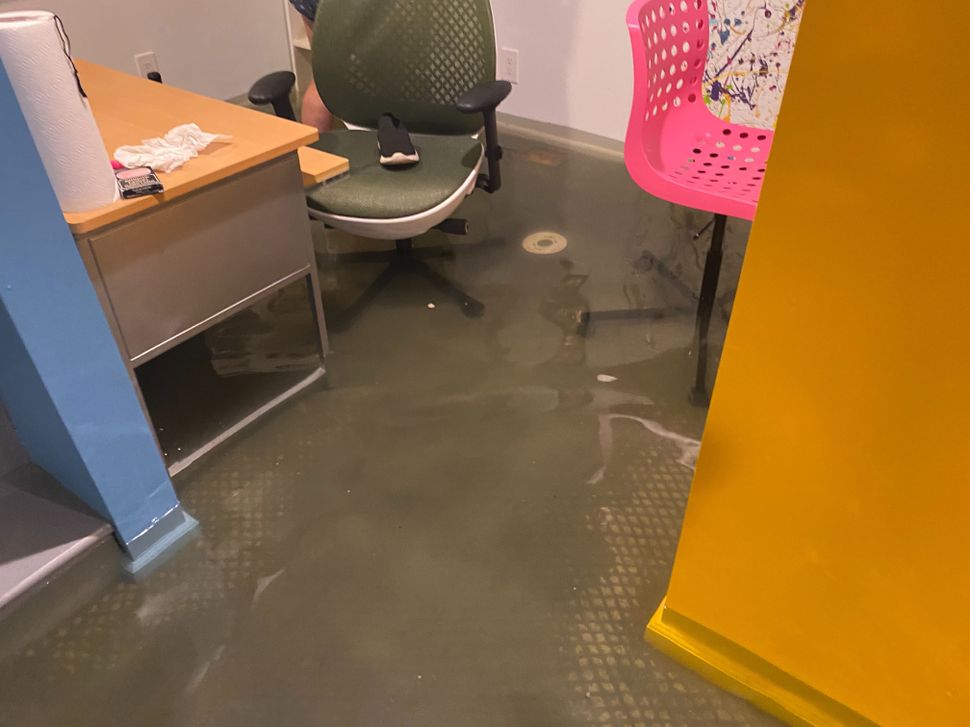 This is an adaptation of Looking Forward, a weekly email from our editor-in-chief sent on Friday afternoons. Sign up here to get the Forward’s free newsletters delivered to your inbox. And for Rosh Hashanah, click here for a free printable collection: 18 Jewish Question about God.

The sukkah decorations are safe. That was our first concern when we discovered six inches of water in our basement Wednesday night. Then we remembered that after last year’s holiday we decided to move the boxes of precious ornaments collected over years of travel, guest-gifts and art projects from the basement to a high shelf in our new shed. Phew.

Even more precious, given their complete irreplaceability: the hand-knit baby sweaters, hats and blankets my mom has made “for the great-grandchildren” (who are not yet on the horizon). I had taken custody of these heirlooms — six big plastic tubs-full, each with its own “Made with love by Nana” tag — precisely because our 1906 Victorian in Montclair, N.J., has a basement with plenty of storage space. Thankfully, those tubs work, and the sweaters stayed dry. Double phew.

Sweaters and sukkah stuff secure, we got to work rescuing what we could from the water. My son, Lev, put my high rain boots on over his pajamas and removed all the electronics (yes, starting with his X Box controllers), and then we formed a little assembly line to shlep the boxes whose bottoms were soaked.

Our minor losses are the ultimate #FirstWorldProblem, especially in a storm that killed at least 43 people in the New York area. The waterlogged basement is not even the worst Ida wrought on our own family; we returned upstairs near midnight Wednesday to learn that my brother-in-law had been driving on I-80 when the storm hit and had to be rescued from his drowning car. So we were incredibly grateful as we sorted through our soggy stuff.

One soaked box held decades-old financial records we probably needn’t have saved in the first place — we’ll burn them in the fire pit this weekend. Another had hundreds of snapshots, which my daughter, Shayna, pulled apart and laid atop newspaper in the living room to dry out. 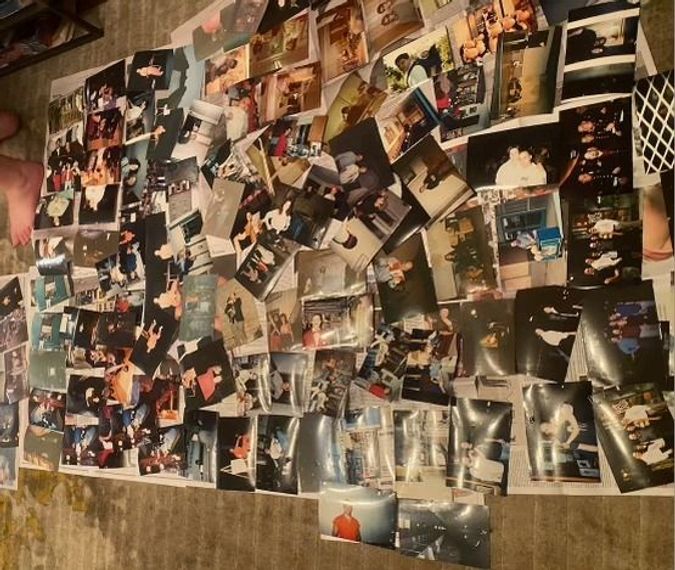 Wet photos, out to dry. By Jodi Rudoren

There was a box with my veil, gloves, kippot, programs and other things from our 2004 wedding. My (damp) 1992 Yale senior essay, an oral history of student involvement in a 1963 voter-registration campaign in Mississippi. My (soaked) first front-page story at The New York Times, a piece from Tarrytown, N.Y., about the public mood amid Bill Clinton’s impeachment. Homemade Haggadot we put together one year so everyone could be on the same page. Letters my mom sent me at Camp Yavneh in the 80s. High school yearbooks. 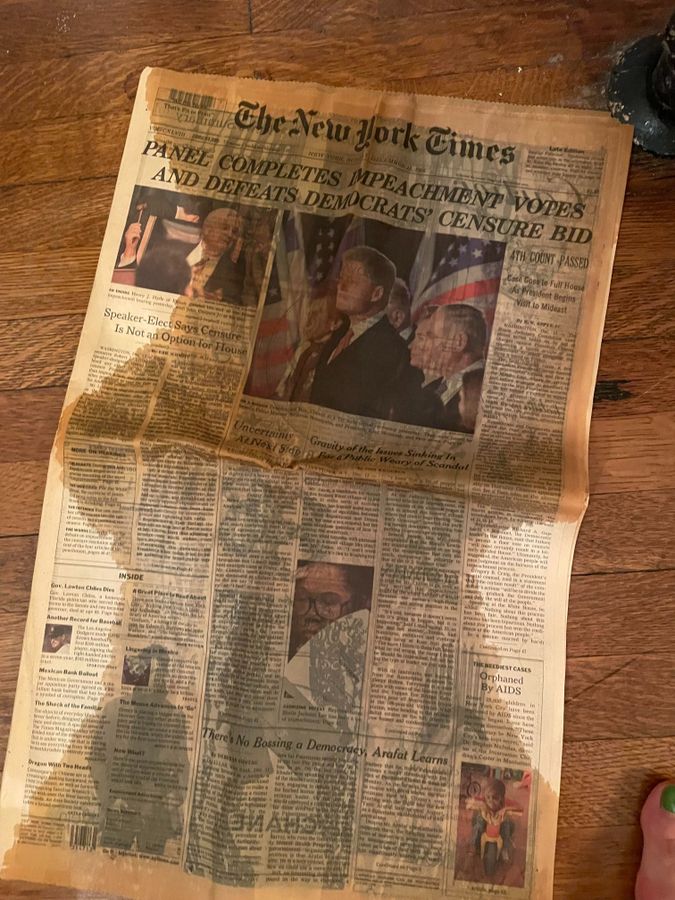 My first front-page piece in the New York Times, soaked by floodwater. By Jodi Rudoren

And then the husband saw it. A mini-DV tape, labeled in his signature architect’s handwriting, “MOM & DAD: 50 YEARS & COUNTING.” He had thought we’d lost it.

I had, embarrassingly, completely forgotten about the tape, which contains an interview I did with his folks, helping their then-teenage-and-younger grandchildren ask about how they met, where they had their first date, when they knew the other was The One.

The interview is from the spring of 2004. Gary and I were living in Chicago, and his family threw us an engagement party on Long Island. It coincided with my future in-laws’ 50th anniversary, so Gary had the idea of putting my reporting skills to use. Gary’s parents, Arlene and Howard Ruderman, died in 2014 and 2016; our kids’ memories of them are few and fading, especially since we were in Jerusalem during their final years. This tape was a treasure — now we just had to find a way to watch it. Who the heck still has a vintage 2004 Mini DV camera?

Plenty of people, it turns out, many of whom follow us on Facebook. Including a Montclair friend  who had been showing her own kids a video-interview of her grandmother, about her pilgrimage to Israel during the Holocaust. She came right over Thursday afternoon, but our tape didn’t fit her camera.

No worries. Jocelyn Hassenfeld, a member of our synagogue who has spent her career in television and video — and who helped Gary create last year’s virtual Purim shpiel — said she could not only play the tape but digitize it for us. We headed over eagerly after dinner. 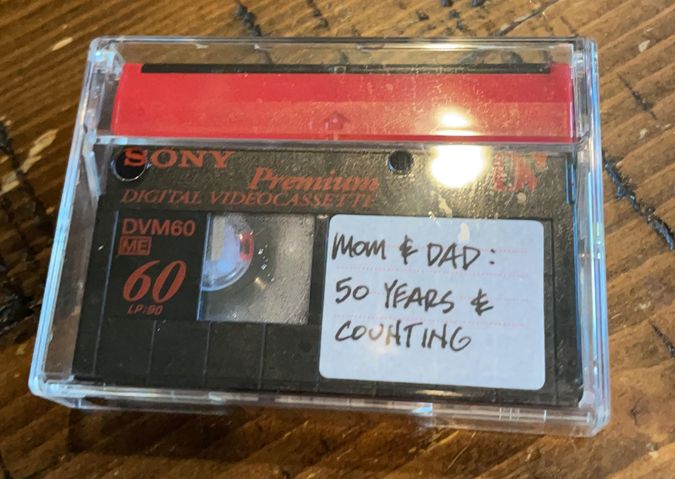 A long-forgotten collection of interviews with my husband’s parents. By Jodi Rudoren

The tape fit this time, but the camera wouldn’t play it. Ditto the deck that would have displayed it on the TV. Jocelyn tried the camera again — now it would neither play nor eject. But she is both patient and persistent, and after a half hour and several different screwdrivers, the cassette emerged, dripping a loop of exposed tape that she then carefully wound back using the old pen trick. It was then that Jocelyn noticed a bit of condensation inside the tape’s plastic case. Her husband, Jeff, suggested we put it in a bowl of rice, like you do when your cell phone accidentally falls in the toilet. Done.

So I cannot, alas, share with you my kids’ reaction to their late grandparents’ love story. At least not yet. We’ll see what happens with the rice, and then send it to a professional lab to see if it can be saved.

The basement is where I have spent the bulk of my pandemic days. It’s where I start each day with a 6 a.m. Peloton workout (the bike should be fine, though it won’t turn on, likely because the cord was submerged, so I’ve ordered a replacement). My desk was there, and the red couch from which I’ve hosted dozens of live-journalism events via Zoom. The ping-pong table where Lev and I have played our epic tournament (score of current set, per chalkboard above my desk, 16 games each). And, now, there’s soggy carpet that will need to be ripped out, some ruined Costco backup groceries, storage racks whose bottom shelves we’ll need to keep clear.

As we await calls back from our insurance company and ServPro, the water-cleanup crew — and for the rice to do its magic on the Mini DV tape — Shayna, who starts high school next week, has been looking at my yearbook. “Were you popular?” she asked, seemingly stunned, as she reviewed the pages of long, dramatic farewells from friends I’ve mostly forgotten. She was equally stunned by the similarities between my professional headshot and my Senior Picture, particularly that at 17 I was already wearing dangly earrings. 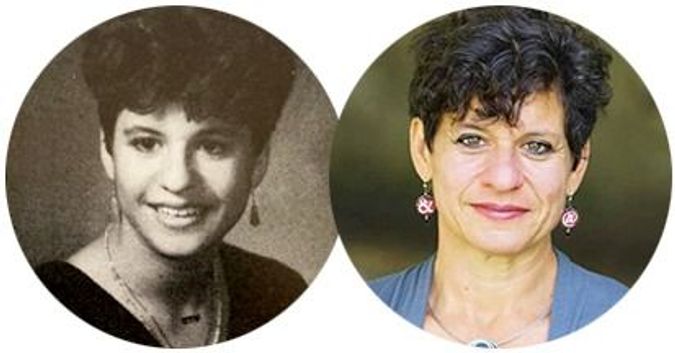 Headshots, then and now. By Jodi Rudoren

I took a peek, wondering what my younger self chose to put in the tiny blurb under the portrait. “Shalom: Simple, total, complete necessity,” it says, plus a couple thank-yous and coded inside jokes. “We know home means love not house.”

A lesson I learned again this week.

I was in The Times’ newsroom, printing our pages of notes for a story about homeschooling when the first, and then the second, plane hit the World Trade Center. Where were you? What did you do that day — and in the days that followed?

As the 20th anniversary of the worst terrorist attack in American history approaches, we’re all reflecting back on what happened that fateful blue-skied Tuesday, and in its aftermath. We’re collecting reader stories of their experiences, to publish next week. Please share yours here (and please share this form with friends).

The Religion News Association recently announced that “Still Small Voice,” Abigail Pogrebin’s  series interviewing 18 Jewish thinkers about God, is one of four Forward finalists in its 2020 awards competition. The series, pondering 18 questions including “Does God love us?” “Are we God’s partners?” and “Does God’s gender matter?” is perfect pre-High Holiday reading.

We’ve got the whole collection in a PDF/eBook that you can print out, or you can browse the collection digitally.