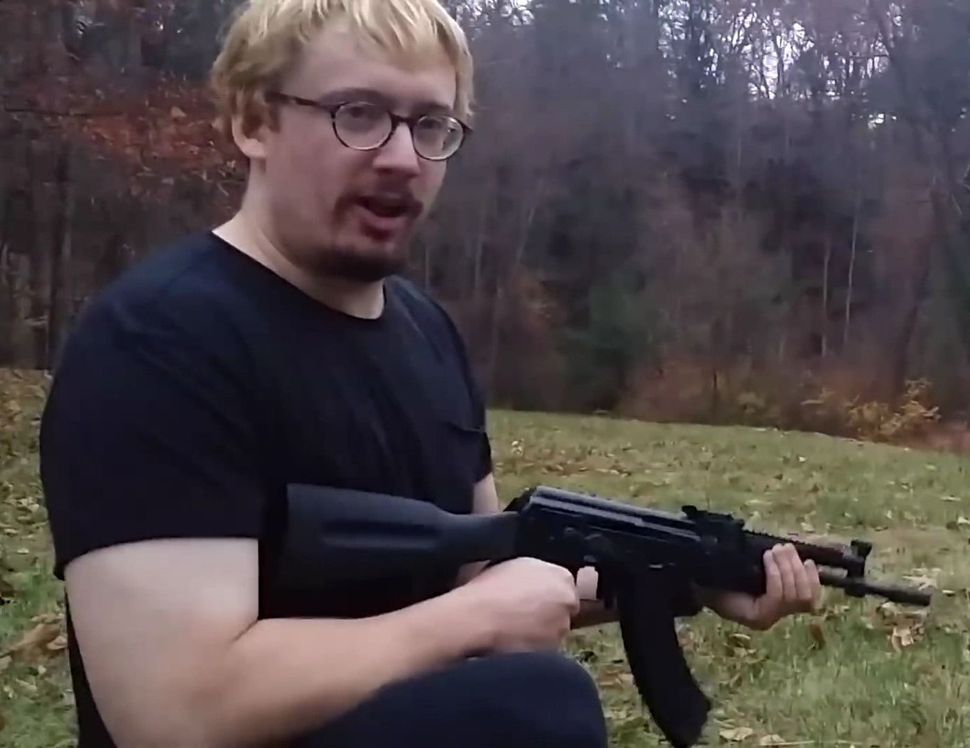 Spotify has come under fire on social media for hosting and promoting a podcast by a far-right comedian and donor to neo-Nazi causes. The popular online music platform highlighted a podcast by Sam Hyde, in what appeared to be personalized recommendations for a user.

Hyde has a well-documented history of giving voice and support to conspiracy theorists and white supremacists.

Under pressure from employees and viewers, the Cartoon Network in 2016 cancelled Hyde’s “alt-right” television show. He has been photographed giving the Nazi salute. And he donated $5,000 to a legal defense fund for Andrew Anglin, the founder of notorious neo-Nazi website the Daily Stormer, after Anglin was sued for harassing a Jewish woman in Montana.

“Don’t worry so much about money. Worry about if people start deciding to kill reporters,” Hyde told a Los Angeles Times reporter at the time, after asking if the reporter was Jewish.

Hyde’s podcast called “HydeWars,” which was created in 2019 and no longer appears to be active, was recommended by Spotify to Andy Stepanian, who runs a newswire called the Sparrow Project.

.@SpotifyUSA I am appalled you would platform Neo-Nazi troll Sam Hyde and recommend his podcast to me as something “we think you’ll get hooked on.”

Hyde contributed $5K to the website that promoted the violence in Charlottesville.

Stepanian shared screenshots on Twitter Wednesday of Spotify’s recommendation of HydeWars alongside two other shows under a banner called “shows to try.” The platform described the trio as “podcasts we think you’ll get hooked on.”

“What is most troubling is that Spotify not only hosts Hyde, but appears to be promoting Hyde’s podcast through their recommendations algorithm — thus greatly expanding his market reach,” Stepanian said in an email.

“I would hope that Spotify take a serious look at Hyde’s behavior both online and off and reach a conclusion that the anti-Semitic, anti-immigrant, and racist content he creates is a threat to diverse communities both online and off has no place on their platform.”

Stepanian’s social media posts about Spotify’s promotion of the podcast received several hundred shares and “likes” from other users. It is unclear how many other people Spotify has recommended Hyde’s podcast to and the company did not respond to a request for comment Wednesday.

Hyde had a short-lived show on Adult Swim, a programming block on Cartoon Network, in 2016 called “Million Dollar Extreme Presents: World Peace,” that the Hollywood Reporter described as veering “into shocking and arguably offensive territory” and which was popular with “the ‘alt-right’ online community that has championed white supremacy and cheered Donald Trump’s rise to power.”

Integrity First for America, a liberal group that has launched a legal campaign against neo-Nazi groups, criticized Spotify’s promotion of Hyde’s podcast on Twitter.

“Spotify is directing listeners to the podcast of a guy who boasted about supporting the neo-Nazi website Daily Stormer, which promoted Unite the Right and joked about the murder of Heather Heyer,” the group wrote, referring to the 2017 rally in Charlottesville, Va., where Heyer was killed by a far-right demonstrator.

Spotify’s expansion from music into podcasts has caused controversy in the past for the Swedish company. The company signed an exclusive deal with Joe Rogan, host of a popular podcast talkshow, in July, raising questions over how Spotify would handle Rogan’s promotion of conspiracy theories, negative statements about transgender people and inflammatory hosts like Alex Jones, founder of “Infowars.”

The question of which individuals should be allowed to use online platforms like Twitter and Facebook has been hotly contested in recent years. Organizations like the Anti-Defamation League have been consistently critical of social media companies for failing to ban users who post hateful content, while some Republican leaders have criticized the tech industry for censoring conservative voices.