Long before Mike Feuer announced his candidacy for mayor, the Los Angeles Jewish community — a force in both local and national Democratic politics — thought highly of the city attorney.

Born to a Jewish family in San Bernardino about two hours east of L.A., Feuer has for decades been active in Jewish affairs. He earned his progressive stripes as executive director of the nonprofit legal aid organization Bet Tzedek, then rode a wave of endorsements to city hall, where he represented the heavily Jewish 5th Council District. Later, as city attorney, Feuer was the face of local opposition to President Donald Trump’s immigration ban.

But the Jewish vote is hardly assured for Feuer in the race to replace Mayor Eric Garcetti, who is term-limited and also Jewish. There is, as of last week, a second mayoral hopeful who is also popular and well-connected in the community, and who may make it hard for many Jewish voters to pick a favorite.

The newest entrant in the race, deemed the frontrunner as soon as she announced, is U.S. Rep. Karen Bass, a Democrat from the city’s Westside whose 37th District includes areas south and west of Downtown L.A. While Bass, who is Black, is not Jewish, she grew up in the same historically Jewish neighborhood where Feuer used to visit his grandparents, and enjoys substantial and enthusiastic Jewish support after representing the city’s biggest Jewish neighborhoods in Congress for the past decade.

There are roughly 500,000 to 600,000 Jewish people living in the Los Angeles area, based on various estimates and population surveys — the population of the city is about four million — and their politics can vary depending on geography, religious observance and even heritage. But the predominantly white Jewish electorate in Los Angeles shares the liberal politics of the city and includes some of its biggest donors. In a crowded field, capturing the Jewish vote could be critical.

“There will be a big competition, not just for Jewish votes but in general for liberal white votes,” said Raphael Sonenshein, executive director of the Pat Brown Institute for Public Affairs at California State University Los Angeles. “There’s kind of an overlap there in terms of competing for those constituencies.”

The pool of mayoral candidates is expected to keep growing between now and the June 7 primary, a nonpartisan contest whose top two finishers advance to the general election in November 2022. Among the possible contenders, former state senator and current City Councilman Kevin de León has announced his candidacy, and billionaire developer Rick Caruso is rumored to be exploring one.

Still, because of their roots on the city’s Westside, the center of Jewish life and Democratic power in the city, Bass and Feuer seem poised to face off there for the bulk of the progressive electorate.

Sonenshein said backing from Bass’ congressional district, which includes both Black and Jewish neighborhoods, could point her to a revival of the Black-Jewish coalition that elected Tom Bradley to five consecutive mayoral terms in the 1980s and 1990s. The so-called Bradley Coalition shared voting priorities of civil rights and social and economic services — Bass’ political wheelhouse.

On the other hand, Sonenshein said, Feuer, in addition to Jewish and white voters, “certainly has some strength” among Latino and Asian American voters. Whereas Bass’s geographic base skews south, he predicted Feuer’s would include part of the San Fernando Valley — his old city council district included Encino. 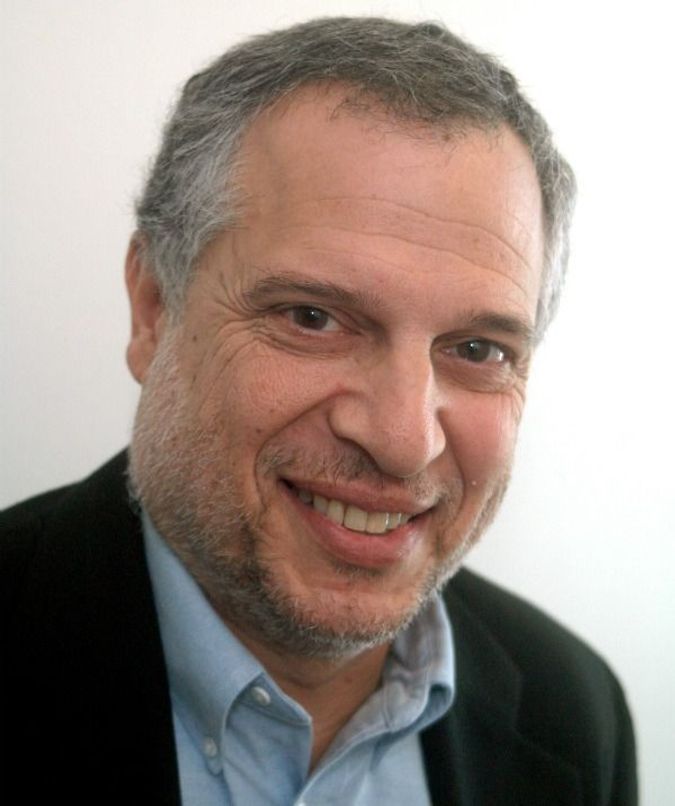 The issues already dominating this race are longstanding. Despite making homelessness a central focus of his mayoral campaigns, Mayor Eric Garcetti presided over a surge in the city’s unhoused population, which now stands at over 41,000. Widespread calls to cut the city’s police department budget — about a third of the city’s budget overall — coincide with a rise in crime. Empirically and anecdotally, there is too much traffic and not enough housing.

On these issues, Bass and Feuer, both having hewn to their social-justice backgrounds through long careers in public office, may have little ideological space between them. Sonenshein said Feuer could be described as center-left while Bass’s base is more progressive, but that it was too early to predict how they would tack as candidates.

“The clay hasn’t hardened in terms of where people are” on the political spectrum, he said.

Nevertheless, the candidates’ respective records in their current office may hold clues about how the campaign will unfold.

When former President Trump banned travel from seven predominantly Muslim countries shortly after he took office in January 2017, thousands of protesters descended upon Los Angeles International Airport to demand the release of detained travelers by Customs and Border Patrol. In one of his signature moments as a city attorney, Feuer went to the airport to look into claims that approved travelers had been detained, only to be denied access to the customs area. For hours, he stood in the baggage claim alongside the protesters. 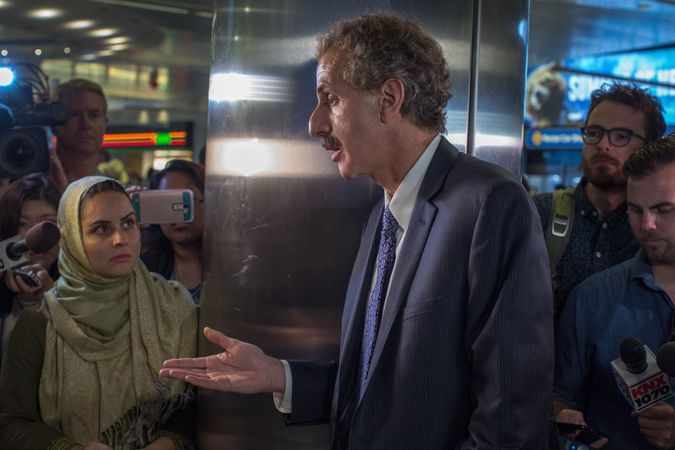 ike Feuer talks to attorneys and reporters after a meeting with officials on the first day of the the partial reinstatement of the Trump travel ban on June 29, 2017. By David McNew/Getty Images

In an interview with the Forward, Feuer said interceding against Trump policies as a city attorney demonstrated multiple facets of his governing approach. And he was proud that his efforts had strengthened his relationship with the local Muslim community.

“In every job I’ve had, I have done everything I can to redefine the scope of the job, and to push on the limits that previous occupants have had on that job,” he said. For example, Feuer said he would declare a state of emergency over homelessness, which would empower the mayor to commandeer hotels to house people.

More recently, Feuer has taken stances that may appeal to centrist and even right-leaning voters. Shortly after the pandemic began, he threw cold water on a stronger eviction ban that was floated in the city council. And he has included a strong pro-law enforcement stance on his campaign website, saying calls to defund the police “ring hollow” amid a rise in crime and vowing to add hundreds of officers to the force.

“We’re in a city right now where having more officers in some locations is a good thing, but the investment isn’t merely in hiring police officers, but in hiring the officer who’s trained, invested in the community, has values,” Feuer said. “We want officers who can be guardians of the communities they serve.”

Bass also opposed both the slogan “Defund the Police” and the approach behind it.

“I think what that slogan is really getting at is the need for resources in the community, and the fact that too many resources are put into law enforcement when the resources should go to solve the problems,” Bass told the Forward. “For example, police officers don’t go to the academy to deal with mental illness, substance abuse, and social issues. That’s not why they become police officers. So what we need to do is address those problems. That helps the police and that helps the community. It is not ‘either/or.’”

Police reform is an issue that also divides the Jewish community. Many Jewish congregations have long coordinated with and depended on law enforcement for security at schools and synagogues. Property crime is an eminent concern. But so is social justice, and Jewish faith leaders from across the city joined Black Lives Matter marches last summer to demand a rethinking — and a scaling back — of policing in the city. 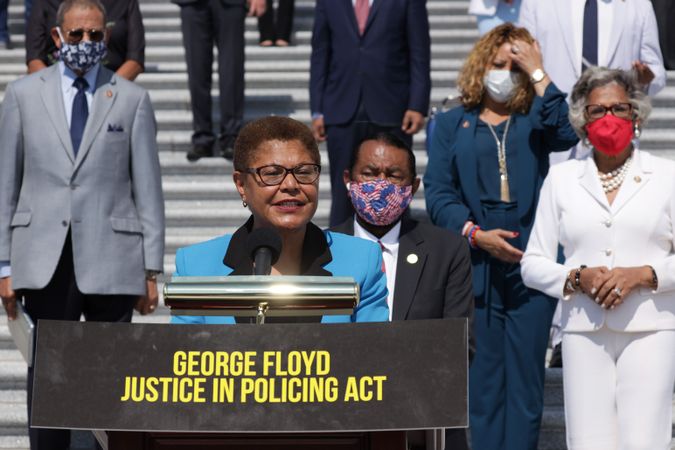 U.S. Rep. Karen Bass (D-CA) speaks as other House Democrats look on during an event on police reform June 25, 2020 at the east front of the U.S. Capitol in Washington, DC. By Alex Wong/Getty Images

Bass, who would be the city’s first Black female mayor, may appeal more strongly to Jews who prioritize racial and social justice.

Brooke Wirtschafter, the director of community organizing at Ikar, a nondenominational synagogue in the Fairfax area, said Bass won her support — and donation — with her long record on racial justice, criminal justice reform and immigration issues. She mentioned Bass’ leadership of the Congressional Black Caucus, through which she advanced the George Floyd Justice In Policing Act, as an example. (Twice passed by Congress, the bill failed in the Senate.)

“She’s a community organizer by inclination and by training,” Wirtschafter said, referencing Bass’s background as founder of the racial justice nonprofit Community Coalition.

According to Wirtschafter, Bass has solicited input from Ikar’s head rabbi, Rabbi Sharon Brous, on Jewish community issues that have come up in Congress. Bass has also spoken and taken questions from the congregation — which meets a couple miles up Fairfax Avenue from where the congresswoman grew up.

As a member of the House Foreign Affairs Committee, Bass also legislated on Israel. She has endorsed a two-state solution and opposed West Bank annexation when Israel appeared poised to do so, calling on her Republican colleagues to join House Democrats in their opposition. Earlier in 2020, she responded cautiously to comments made by her colleague from Minnesota, Rep. Ilhan Omar, that many took as antisemitic. While flatly condemning Omar’s comments, Bass defended her, saying she was unfairly singled out.

Her reputation for bipartisanship dates to her time as speaker of the California State Assembly, when during the 2008-10 financial crisis, she negotiated a budget with a Republican governor’s office that included both tax increases and major social service cuts.

Jack Weiss, a former representative of Mike Feuer’s old 5th Council District, said Bass had already won “the Rachel Maddow primary” — in other words, progressive brand recognition from her turn on the national stage — and was the prohibitive favorite.

Sonenshein, of the Pat Brown Center, acknowledged that being floated last summer as a possible vice presidential nominee — and then last fall as a possible replacement for Kamala Harris in the Senate — had been a “huge boost” locally for someone who has spent the last decade in Washington, D.C.

But he wasn’t ready to place her in pole position so early in her race. And he reserved his judgment on the candidates’ respective chances with the Jewish community.

“Jewish voters have a menu of candidates who are all quite progressive,” he said. “They may scatter a bit, but I don’t know how. Nobody has a lock on the Jewish vote itself.”