Nike isn’t boycotting Israel — despite reports to the contrary 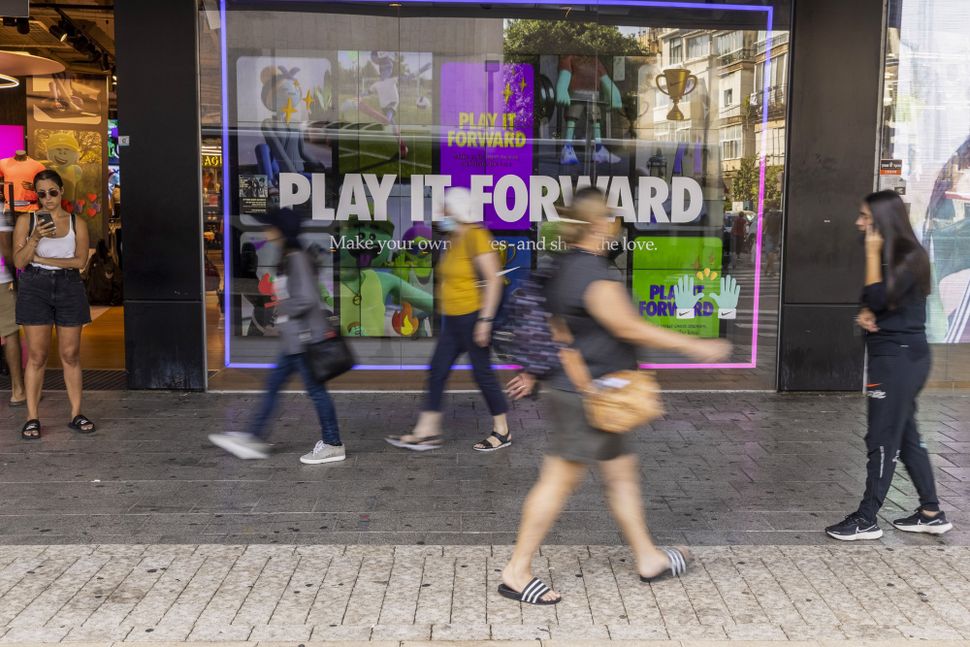 People pass by a Nike Inc. store outside the Dizingof Center mall in Tel Aviv, Israel, on Monday, Sept. 20, 2021. A third dose of the Pfizer Inc.-BioNTech SE Covid vaccine can dramatically reduce rates of Covid-related illness in people 60 and older, according to data from a short-term study in Israel. Photographer: Kobi Wolf/Bloomberg via Getty Images Photo by Getty Images

The news would have been shocking — if it were true: Nike, the global sportswear behemoth, had aligned itself with Palestinian activists and would stop selling its products in Israel. A move like that would represent one of the most significant wins for Boycott, Divestment and Sanctions activists to date, and easily eclipse Ben & Jerry’s summer announcement that it would stop selling its ice cream in the West Bank.

Muslim, a media outlet popular with young adults, posted an Instagram slideshow Wednesday announcing in bold font that, “Nike will stop selling its products in Israeli stores, and will be terminating all sales.”

That post was based on an article by the Middle East Monitor, a publication that supports the Palestinian cause and which framed Nike’s move as a “hammer blow” to Israel. Many social media users celebrated the move as a win for BDS.

The media storm was based on a letter from Nike to shoe stores in Israel announcing that it would stop selling its products to these retail outlets in May. The letter, first reported by the Israeli press Sunday, said that “the continuation of the business relationship between you and the company does no longer match the company’s policy and goals.”

On first blush, that language bears some resemblance to Ben & Jerry’s July statement that it was “inconsistent with our values” to continue selling its ice cream in the West Bank.

But, while Nike did not respond to a request for comment Thursday, the company’s decision appears to be a purely commercial and very limited one. The Oregon-based corporation has centralized distribution in recent years, consolidating sales in its own retail outlets and on its website, along with a few major chains. CNN reported last March that Nike was cutting off wholesale supply to an array of retailers, including independent stores, regional department stores and online sellers like Amazon and Zappos.

The goal is to drive customers to Nike Stores, which are owned by the company, and to its online store — the better to offer a “premium experience” to shoppers, according to CEO John Donahue. At the same time, it’s allowing sales to continue at a few major chains like Dick’s Sporting Goods and Foot Locker, which has several locations in Israel.

Nike’s move away from a distribution business is still big news for independent Israeli retailers, as well as their American counterparts, who have said that Nike’s decision may force them out of business.

But Nike has not announced any plans to shutter its Israeli website, which lists a wide array of products priced in shekels, or its 15 Nike Stores in Israel, including locations across the country, although all within the country’s pre-1967 borders. Sales will presumably also continue at Israeli Foot Locker locations.

That might explain why none of the leading organizations advocating for BDS, including the official BDS Movement, claimed Nike’s announcement as a victory. The BDS Movement and the US Campaign for Palestinian Rights, which tracks BDS wins, did not immediately respond to requests for comment Thursday.

A spokesperson for the American Jewish Committee, which has been vocal in its opposition to Ben & Jerry’s announcement this summer, said in an email that the organization did not believe Nike was boycotting Israel.

There has also been no concerted campaign pressuring Nike to withdraw from Israel, like the one Vermont activists had been waging on Ben & Jerry’s for more than 10 years. The Palestinian BDS National Committee is currently calling for targeted consumer boycotts of only seven companies. That list includes one of Nike’s competitors — Puma, the German sportswear brand that supplies soccer teams in Israeli West Bank settlements through its sponsorship of the Israel Football Association.

BDS activists claimed a small win three years ago, when Adidas announced that it would no longer sponsor the Israeli soccer league, although the corporation told Israeli media at the time the decision was “not politically motivated.”

Nike isn’t boycotting Israel — despite reports to the contrary