Carolina Kuperstein is the only Jewish kid at her school in Florianópolis, an island city of about 500,000 in the southern Brazilian state of Santa Catarina, so the 13-year-old’s idea of a typical bat mitzvah comes not from her classmates, but from American movies.

“They show all the joy and happiness in Jewish tradition, and I wanted to experience that,” she said on a recent Zoom call. 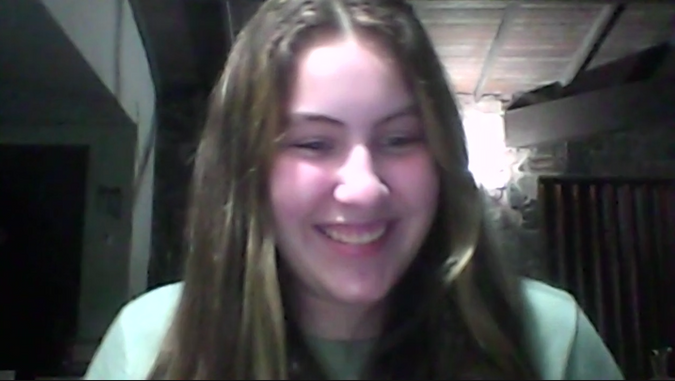 Carolina Kuperstein in a recent Zoom call with the Forward. Image by Louis Keene

For months, Kuperstein prepared to read from the Torah and rehearsed her speech, and her parents — delighted that she wanted to carry on the faith — planned a big party to celebrate the occasion.

But Kuperstein shocked her parents when she declared that no party would be needed — and that she would not be accepting any gifts. Instead, she wanted all that money to go to charity — to feed hungry families in Santa Catarina and São Paulo, which are reeling due to double-digit inflation and the coronavirus pandemic.

“We have problems in health, education, and food in Brazil,” Kuperstein said in her native Portuguese, as her Hebrew teacher, Ethel Scliar, translated. “But we needed to choose one place to start.”

Pairing Jewish coming-of-age rituals with a fundraiser or community service is not uncommon in the United States or Israel. Many synagogues encourage their b’nai mitzvah to take on some sort of service project to accompany — or perhaps offset — the often extravagant celebrations and lavish gift-giving. It’s less common for the charity to replace the gifts and party altogether.

Rabbi Uri Lam, who leads a large Reform congregation in São Paulo and visits Florianópolis a few times a year to serve its Jewish community of about 200 families, said he was touched by Kuperstein’s choice, which was without precedent in his decades of teaching b’nai mitzvah.

“She didn’t want anything for her, but for people she saw in Florianópolis,” Lam said. “I thought it was very beautiful, and very Jewish.”

Kuperstein set her fundraising goal at 10,000 Brazilian real, or about $1,800 — enough to provide meals for 360 families. She wound up raising nearly twice that, thanks to a pledge drive that included a Kickstarter-type rewards program.

She had also been saving for her first trip to Israel; those savings, too, went to the fund.

“Going to Israel would be fulfilling,” she said. “But doing this project, I felt that I could fulfill my role as a ‘bat mitzvah’” — literally, as a daughter of the commandment.

To entice donors, Kuperstein’s fundraiser offered Jewish books and objects, like a hamsa magnet and a box of 12 stones reminiscent of those on the high priest’s breastplate. The money will be divided evenly for distribution by Lam’s synagogue, Congregação Israelita Beth-El (Congregation Beth-El), and UNIVRI, a Santa Catarina Jewish community group.

As the only Jewish girl in her class, Kuperstein said she is conscious of the impression she makes on her classmates. Fascist movements are ascendant in Brazil, and Scliar said neo-Nazi groups were gathering strength in Florianópolis. 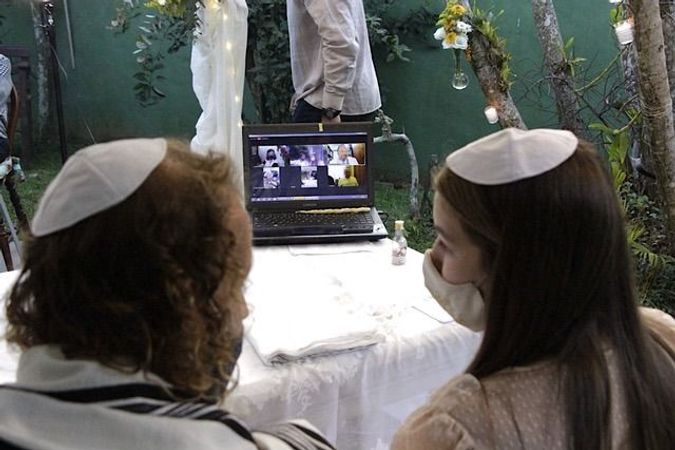 Carol Kuperstein, right, at her bat mitzvah ceremony, which was held on Zoom due to pandemic restrictions. Courtesy of Ethel Scliar

Her classmates like using her as a resource for questions they have about Judaism, she said, and she is happy to oblige them. They pepper her with queries about its history and traditions. Some have pitied her for abstaining from pork. When Kuperstein described her fundraiser to her friends, a few thought she was crazy.

Being an outsider in a class full of Christians — her school is secular, but her milieu is predominantly Catholic — has compelled her to lean into her religious and cultural identity, making her more attuned to her family history and her place in it, she said.

Kuperstein’s grandparents fled Europe during World War II, part of the second mass migration of Jewish families to Brazil. Her parents are natives of Porto Alegre, another southern Brazilian city whose Jewish community of about 10,000 to 15,000 dwarfs Florianópolis’s, which Scliar said has neither a synagogue nor a full-time rabbi. (The Jewish Confederation of Brazil (CONIB) estimates the country’s total Jewish population at about 120,000; about half of them live in São Paulo.) When the Jews of Florianópolis want to convene, they meet at a local space they rent as a community center.

It was the threat of losing the thread of culture and faith that motivated Kuperstein to mark her bat mitzvah in the first place.

“Jewish people have a long story,” she said, switching to English. “Just to continue the story is important, because Jews have no representation in Brazil and Florianópolis. None of my friends know anything about this. When I’m showing them how it’s like to be a Jewish girl. Like, read Anne Frank, please!”