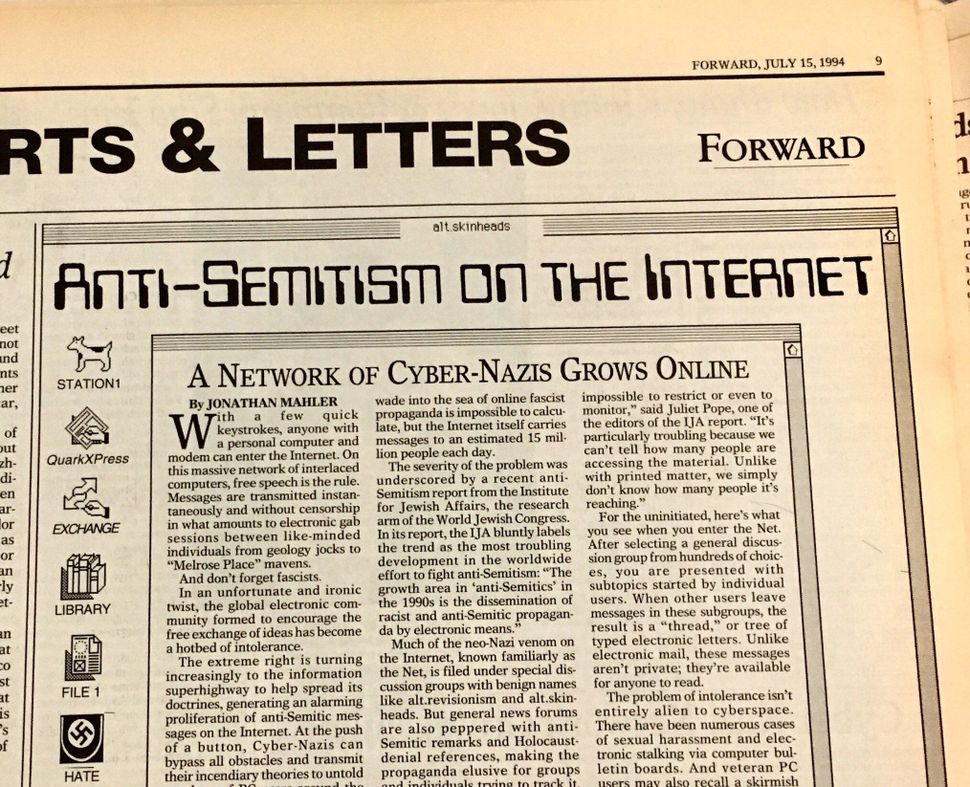 The more things change, the more they stay the same.

“The global electronic community formed to encourage the free exchange of ideas has become a hotbed of intolerance,” the Forward reported with a mix of gravity and wonder 27 years ago.

“The extreme right is turning increasingly to the information superhighway to help spread its doctrines, generating an alarming proliferation of antisemitic messages.”

A colleague shared this old clipping the other night when we were discussing whether “website” should be capitalized (no, since an Associated Press Stylebook change in 2016, but yes back then). It is at once profoundly dated and eerily prescient.

The article reported that “an estimated 15 million people each day” were using what is “known familiarly as the Net,” where “messages are transmitted instantaneously and without censorship in what amounts to electronic gab sessions between like-minded individuals from geology jocks to ‘Melrose Place’ mavens.”

Some of these like-minded individuals were “Cyber-Nazis” convening in groups like “alt.revisionism” or “alt-skinheads” and, the article warned ominously, “general news forums are also peppered with antisemitic remarks and Holocaust-denial references.”

Flash forward 27 years, where Facebook alone — excuse me, “Meta” — reaches 3.5 billion users and where my teenage daughter cannot enjoy a TikTok video about miniature ice-cream tacos for Hanukkah without wading through a slew of anti-Israel vitriol. The Anti-Defamation League released a survey earlier this year in which 36% of American Jews said they had experienced online hate and harassment.

And when the Center for Countering Digital Hate this spring flagged 714 anti-Jewish posts that violated social media platforms’ guidelines — posts that collectively reached 7.3 million people — 84% of the reports were ignored.

Yes, antisemitism is alive and well on what is “known familiarly as the Net,” and the roots of the poisonous forest that blankets our Twitter and Instagram feeds today are all visible in this time capsule of an article from the summer of 1994.

I was a young reporter at the Los Angeles Times back then, about to get my big break covering Orange County’s municipal bankruptcy, then the largest in history. I had my first email address and occasionally used listservs like ProfNet to find expert sources, but was certainly not fluent in UseNet groups being hijacked by neo-Nazis.

Bill Clinton was president but Monica Lewinsky not yet a White House intern. Yitzhak Rabin was still alive, and about to win the Nobel Peace Prize with Yasser Arafat for signing the Oslo Accords. The No. 1 pop song was All-4-One’s “I Swear.” And a young freelancer named Jonathan Mahler wrote “Anti-Semitism on the Internet” for the Arts section of the Forward, where he would later become a Washington correspondent and then Managing Editor.

“I had never been on the internet, but I had a friend whose brother was a quantitative analyst, Jewish, and he had seen this stuff,” Mahler, now a staff writer at The New York Times Magazine, told me this week. Like most people at the time, Mahler did not have even a dial-up connection in his apartment, so he visited this friend’s brother at his Wall Street office for a virtual tour of this ugly underworld.

“I do remember it being pretty shocking,” Mahler said. “It seems naive to say this now, but it felt like, ‘It’s 1994 and there are still people out there saying this stuff? There’s a whole world of Holocaust deniers out there, really?’ It seemed so fringy and marginal that it seemed surprising that you could build a trend story around it. I remember being genuinely surprised that this was actually a thing, this was a phenomenon.”

The article was prompted by a report from the research arm of the World Jewish Congress that called online hate “the most troubling development in the worldwide effort to fight antisemitism.” It mentioned the ADL’s successful battle to convince Prodigy — an early online service described by The Times that very year as “family oriented” — that antisemitic hate violated its guidelines barring offensive material, but said “the war is far from over.”

And it introduced Ken McVay, then a 53-year-old assistant manager of a gas station/convenience store in British Columbia, who said he had spent up to 12 hours a day since 1991 posting “impassioned responses to the offensive material” and was at that moment compiling “more than 40 megabytes of information or more than 2,000 pages of typewritten text” into “a definitive communique on Holocaust denial.” 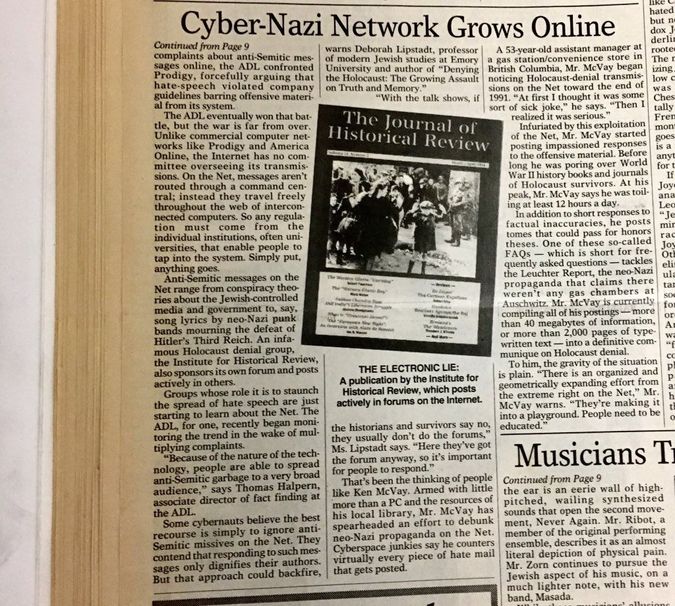 Eliya Smith, the Forward’s editorial fellow, tracked down McVay, who was honored for this work in 1995 with the Order of British Columbia (along with one of my favorite singer-songwriters, Sarah McLachlan!). He lives on Vancouver Island, where he cultivates orchids.

McVay was born in 1940 and grew up in California’s Santa Clara Valley, “surrounded by vets and Rosie the Riveters,” and, after running away from home just before his 16th birthday, started reading everything he could about World War II. His colorful career included driving a bus and a cab, working at Lockheed Martin and, back when neither Mahler nor I knew what the internet was, using it to run a little network of fish farms and their suppliers that went bust when the price of salmon fell from $5-$6 per pound to $1.

“By that time I had a computer system with six phone lines,” he recalled, “which now had no purpose other to entertain me.”

Back then, he said, there were maybe 600 or 700 “news groups” and he was shocked to discover people posting “anti-Jewish screeds” in ones supposedly devoted to rose-growing or diamond-cutting. “I ran into a 19-year-old fellow, I don’t remember his name, and he was spouting off about Auschwitz,” recalled McVay, who is now 81. “I knew that things he was saying were bullshit. I started calling him names.

“I started getting emails from Jewish students all over the place saying, ‘We appreciate what you’re doing, but if that’s all you can do, please stop — you’ve got to confront him with facts, not just insult him,’” McVay continued. “So I went to the library and got a lot of books, and I started typing them up so I could post them on UseNet.” Eventually a local university let him use its scanner, and he began uploading documents from the Red Series, a 12-book collection of material from the Nuremberg Trials, and created a website called “Nizkor,” Hebrew for “we remember,” which is now run by B’nai Brith Canada. 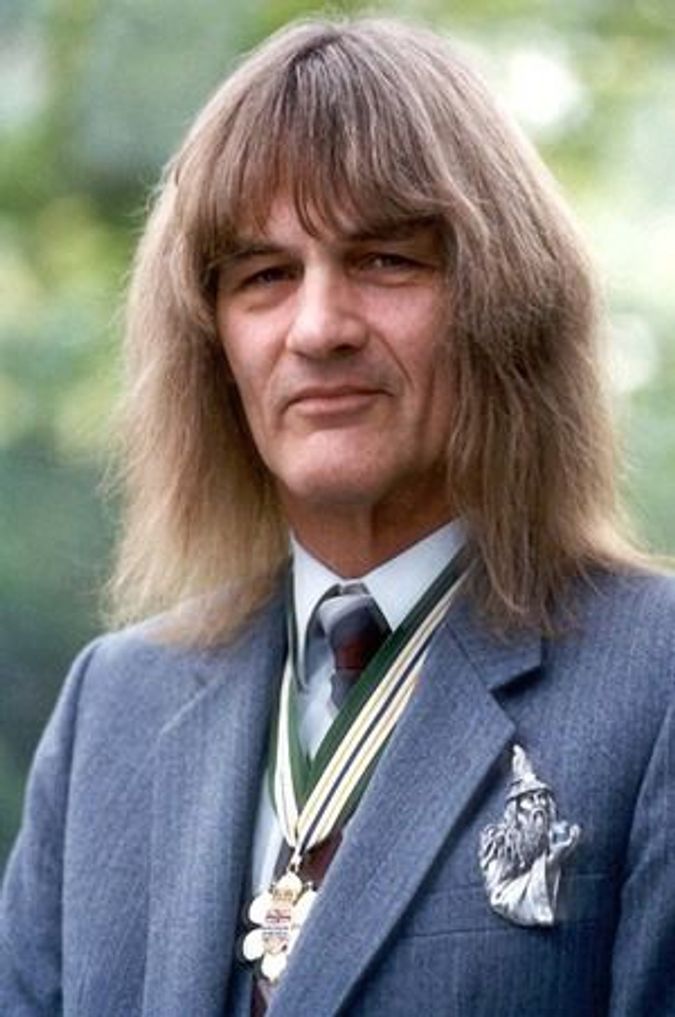 “It just grew and grew and grew,” McVay said. “People sent me documents and that led to the website and that led to speaking engagements and I had my 15 minutes.” He thought it was working. “Years later, I had some of these kids who were Nazis when they were 18 years old and were now married with kids and they were writing to me or their lawyers were writing me to say, ‘Please, take this down, we’re embarrassed, we’re ashamed.’”

As McVay tells it, several Jewish individuals and organizations supported this work through the 1990s, until B’nai Brith, concerned that Nizkor was cannibalizing its donors, offered to pay him $2,000 a month if he’d stop fundraising. That arrangement lasted from 1998 until 2010, he said, and he quit the anti-antisemitism crusade two years later, having concluded — contrary to all evidence — that the battle was won.

“The one thing I learned in those 18 years of dealing with them is, number one, there aren’t very many of them — I’m talking about the right-wing militias — they’re nothing-burgers,” McVay told me.

“The fact that the Democrats are trying to turn them into some monstrous threat to the national security is just silly,” he added. “I’m not concerned about the Holocaust deniers at all. They were squashed.” 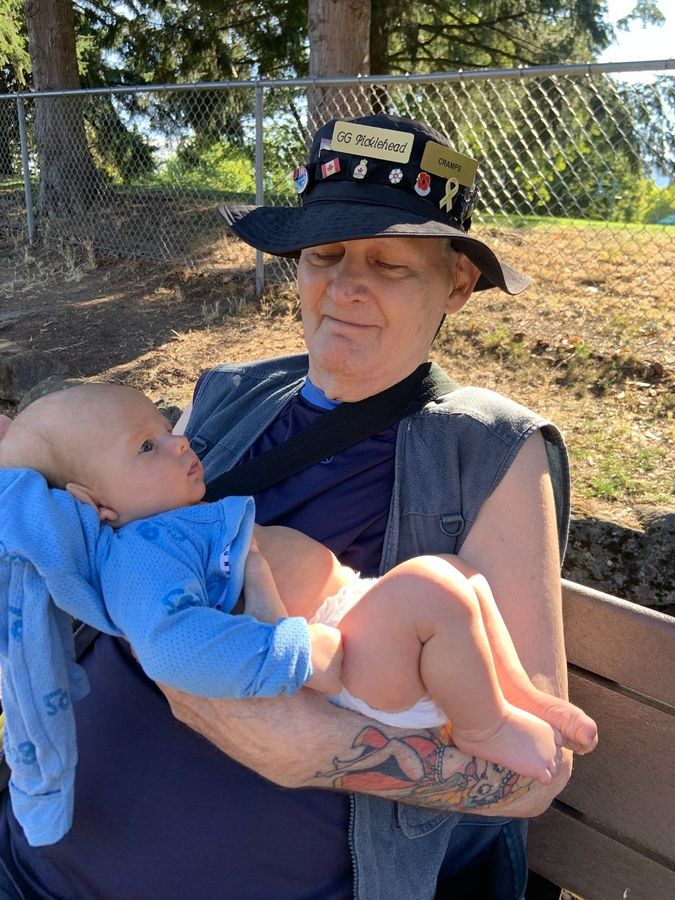 A recent photo of McVay. Courtesy of Ken McVay

Alas, the ADL and Lipstadt and the vast majority of Jews on social media, including my daughter, would disagree. But the world, online and IRL, is not divided neatly into pure heroes and villains like a Marvel comic; it is filled with complicated characters. Ken McVay, for one.

He said he got “thrown out of Twitter two years ago for saying things they didn’t want to hear” (he could not recall specifics) and now spends his online hours on Gab, Gettr and MeWe, platforms known as conservative hotbeds for extremist hate — including, of course, antisemitism.

McVay calls himself a “hard-core Constitutionalist” and as our conversation wore on, began to spout conspiracy theories about the coronavirus vaccine and denounce mask mandates and other actions by the Australian, Canadian and U.S. governments as “Fascist.” In an email to me afterward, he equated vaccine passports to the yellow stars of the Nazi era — just the kind of antisemitic tropes many of us recoil at online every day.

The more things stay the same, the more they change.