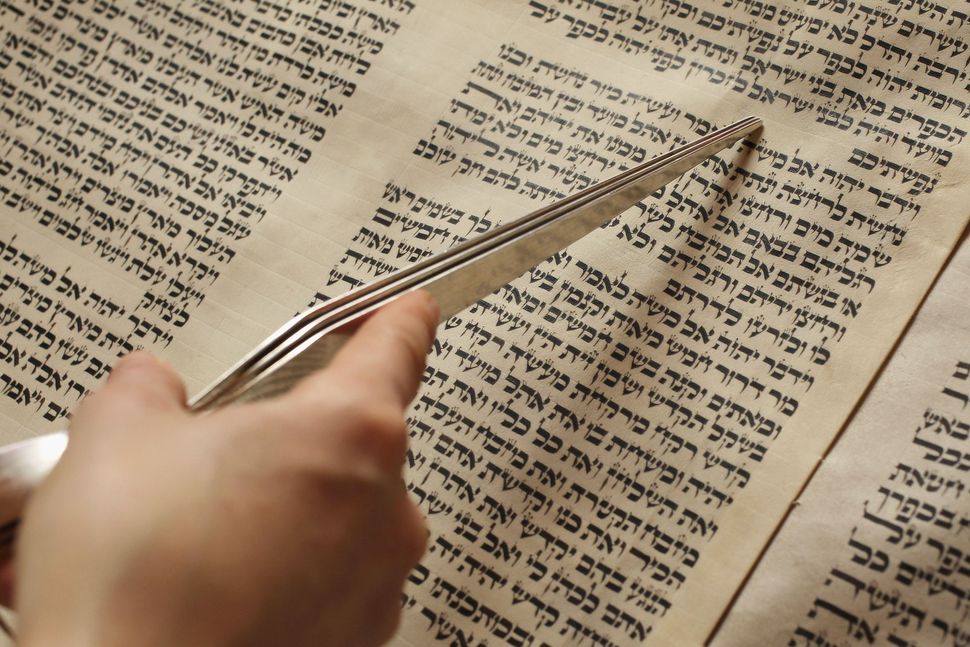 I was thrilled when our synagogue assigned bnei mitzvah Torah portions and our twins got “Toldot,” the coming-of-age story of the first biblical twins, Jacob and Esau. Then I re-read it.

The story is both totally unbelievable and deeply depressing. An ancient version of a Lifetime original movie, full of family melodrama — only here, the characters who lie, cheat and steal not only never get their comeuppance, they somehow emerge the heroes, enshrined forever among the seven matriarchs and patriarchs we invoke at every prayer service.

A refresher: It takes Rebecca awhile to get pregnant (I can identify) but she ends up with twins who “fight” in her womb (yep) and emerge as radically different kinds of kids (check). Rebecca loves the nerdy homebody Jacob and her husband, Isaac, loves the burly hunter Esau, who is technically the elder and thus entitled to both blessing and birthright (the difference is somewhat lost on me).

First Jacob tricks Esau into trading his birthright for a bowl of soup, then Rebecca helps Jacob plot a coup by tricking Isaac into blessing him instead of his brother. Eventually Esau vows to kill Jacob and is basically banished.

Umm, what? A mother who not only admits to openly favoring one child over another but actively works to pit them against each other? The whole magic of parental love is that there’s always enough of it to go around (if, perhaps, never enough time or patience to properly express it).

The most heartbreaking moment comes after the deceptive deed is done, when Esau asks Isaac, “Do you have only one blessing, father?” and weeps aloud. This could be the story’s saving grace, a turning point, with Isaac responding, “Of course I have blessings for both my children — different blessings, perhaps, because they are different people, but blessings of equal value because I love them equally.”

Instead, he offers the lamest blessing imaginable, really more of a curse — you shall dwell away from the earth’s richness, you shall live by the sword, you shall serve your brother. Fighting words for any twin.

I brought all this up to our rabbi, Marc Katz, admittedly in something of a sputtering rant. “The Torah,” he said simply, “is not a parenting manual.” 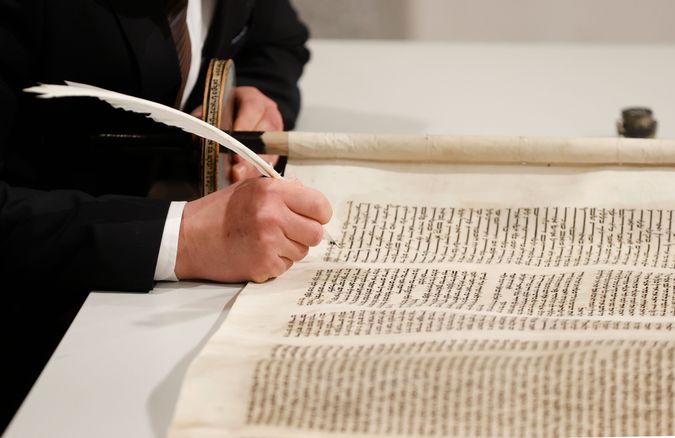 I have always loved being the mom of twins, despite, as I wrote last month, the difficult journey that led up to it. You instantly enter this not-so-secret society, and attract all kinds of special attention from strangers on the street. (“One of each! How perfect!” the ladies would coo as we cruised around Brooklyn with the pink-and-blue stroller cozies my colleagues gave us as a gift.)

I loved that the double stroller had room underneath for all our groceries. I loved that the kids always had a handy playmate. And I loved that they generally reached each stage at the same time — especially as I watched friends finish potty-training one kid only to have to start all over again with diapers for another.

When parents of older twins passed us in the park, they’d whisper, “It gets easier,” and it does. The first year is an unimaginable blur of sleeplessness and feedings — my friend and twin-mom mentor, whose boys are 14 months older, had a mug that said something like “I scoff at one baby” — but then you get the benefit of kids on the same schedule and doing similar homework and eventually, if you’re so inclined, one bnei mitzvah party instead of two (and then, of course, two college tuitions at the same time — oy).

People often ask how our kids get along, and the husband likes to say they’re like an old married couple — they bicker and push each other’s buttons but at the end are partners who would stand up for each other against all comers.

So I badly wanted to see Rebecca as a role model. Instead I found her mystifying. To not only pick Jacob over Esau but conspire to trick her own husband? What are we supposed to learn from this; what are we meant to admire?

I got the chance to parse all this on a delightful podcast hosted by Amanda Weiss and Gabe Snyder, rabbinic and cantorial students at Hebrew Union College called “Drinking & Drashing.”

The “drashing” is them chatting about each week’s portion with Torah laypeople like me. The drinking is a custom cocktail — for Toldot, “Red Stuff” to mimic the stew Jacob makes to entice Esau into selling his birthright: one ounce each of red vermouth and Campari, stirred in a low-ball glass with ice and then topped with an ounce of Prosecco — “for the family drama that will soon bubble over,” Snyder explained, and then an orange peel and a twist of lemon “for the two brothers at odds.” Yum.

Weiss gave her “senior sermon” about Toldot — which means “generations,” or “descendants” — on Thursday at H.U.C. She noted that Rebecca “confounds patriarchal expectations” by, among other things, choosing her own husband, and described her as “a wonder woman” with “gumption” and “a history of showing up to do the unexpected.”

Weiss focused on a line from early in the portion, when the twins are making Rebecca’s pregnancy traumatic and she asks, essentially, “Why is this happening to me?”

“Who am I really, who do I want to be, how do I want to be?” was Weiss’s interpretation of the line. How might Toldot have turned out differently, she wondered, “if the whole family had asked themselves this” rather than, you know, tricking each other and being tricked, weeping and fleeing?

I was also struck by Rabbi Lydia Medwin’s take on Toldot, in this week’s edition of “(M)oral Torah,” a newsletter produced by T’ruah, the rabbinic human-rights group. Like me, Rabbi Medwin, who works at The Temple in Atlanta, seems troubled by Toldot — she notes that it’s full of violations of the future Ten Commandments (honor parents, don’t covet, don’t steal, for starters).

But, unlike me, Rabbi Medwin is a scholar of the Talmud, and the Talmud gave her a more hopeful reading. It seems that Toldot has a different spelling for the Hebrew word “goyim” — for the nations the fighting twins represent — so it can be read instead as “geyim,” or “two individuals who can make us proud.”

The Talmud then highlights two descendants of Rebecca, the Roman officer Antoninus and Rabbi Yehudah HaNasi, who Medwin says did not live with the scarcity mindset but “debated one another with abundant respect and abundant room for challenge.”

I’m all about debating with respect and room for challenge. And “two individuals who can make us proud” is pretty much the definition of life as a twin mom. (Along with “I scoff at one baby.”)

Which brings us back to the Rudoren bnei mitzvah, a hybrid affair last November in which people Zoomed in from Jerusalem and London and Texas and our family and local friends gathered afterward for a bonfire in our backyard. There was drinking — alas, not the Red Stuff — but only after the drashing, led of course by the twins. (Thanks to the wonders of technology, you can watch the whole thing here, or skip to the husband’s Oscar-worthy montage, at 2:08:56.)

Our son, Lev, related Toldot to “cancel culture.” Why have we canceled Esau when it was Jacob who did the terrible thing? Why does Jacob not get canceled? The traditional answer, Lev taught, is that since Jacob is one of the patriarchs, “we focus on the good to keep our positive image intact.”

But my kid didn’t buy it. “Although I think it’s important to honor our ancestors,” he said (thank you), “I don’t think that we should forget bad things that they have done just because they are one of our ancestors.”

Instead, Lev said he liked to think of Jacob’s story as a parable about the danger of cancel culture. Jacob stole the birthright and blessing but “used the stuff he got to do some good things,” Lev said. “It shows that if you are sorry and pay for your mistakes, you can come back from anything.”

What our daughter, Shayna, saw in the story was “how messed up the system really is.”

“People in the Bible are always favoring one child over another,” she noted. “Isaac never considers the possibility of breaking this cycle, so he has taught his sons that uncontrollable things like birth order determine their fate, and their blessings.” (Yes, Shayna is technically our younger twin, by three minutes.)

Instead of running from this broken system with its unfair rules, Shayna said, Esau — or, I would argue, Rebecca, if she was a mom who wanted the best for both her twins — might have tried to challenge and change the rules.

“Systems are important and rules are necessary,” Shayna acknowledged. But unwritten rules and informal systems — like popularity in school, or structural racism — “are based too often on stereotypes,” she said, and “hard to fix because they’re not written down anywhere.”

Esau was stereotyped as dumb because he was strong and liked the outdoors; Jacob as needing to cheat because he was smaller and gentle; Shayna herself, throughout elementary school, was often assumed to be a boy because she preferred swim trunks to one-piece bathing suits.

Amen, and may your Shabbat Toldot be full of abundant love and free of stereotypes.