Einstein manuscript goes for $11 million at auction, highest ever paid for the genius’ memorabilia 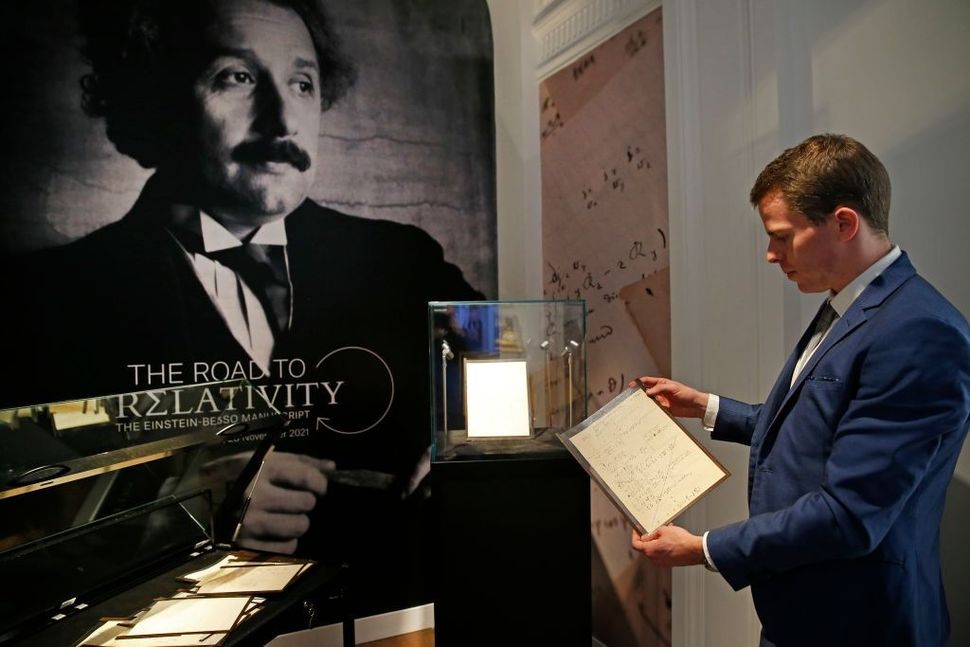 Vincent Belloy, a specialist in the Books and Manuscript department at Christie’s, poses with the Einstein manuscript. (Getty Images)

A rare 54-page manuscript with Albert Einstein’s early scribblings on the general theory of relativity sold for $11.4 million at Christie’s auction house in Paris on Tuesday. The documents were expected to sell for $3 million, but many in the room seemed surprised when the bidding went on for more than 15 minutes.

The sale broke a record for the largest amount ever paid for a piece of Einstein memorabilia. Prior to Tuesday, that record had been held by a note that Einstein wrote on the back of a napkin and gave to a Japanese bellhop. It was sold in 2017 for $1.5 million.

Christie’s has not yet revealed the buyer of the manuscript.

“It was one of the most important documents on Einstein’s road to general relativity,” said Dr. Hanoch Gutfreund, head of the Albert Einstein Archives at Hebrew University in Jerusalem, a school the Nobel Prize physicist helped establish. The archives are home to 82,000 documents that belonged to Einstein, but others – like this manuscript, which ended up in the hands of Einstein’s friend and fellow physicist, Michele Besso – are often sold to collectors.

Indeed, the Christie’s auction was not the only Einstein auction today. In Israel, the Kedem Auction House was selling a letter in which Einstein warned of antisemitism he saw at universities in the U.S. “A tremendous degree of antisemitism exists here, especially in academia (though also in industry and banking),” Einstein wrote, according to the English translation. That item sold for $55,000.

Sixty-six years after his death, Einstein memorabilia continues to flood the marketplace. In 2015, a batch of Einstein’s letters fetched $420,000 at auction. In 2016, a letter that Einstein wrote to his son was auctioned for around $100,000. An autographed copy of the iconic photo of Einstein sticking his tongue out sold for $125,000 at auction.

John Reznikoff of University Archives in Connecticut has sold many Einstein-related items – including a wax mold of the genius’s head, which Einstein autographed. It sold earlier this year for $22,500. “There’s an order of value for things related to Einstein,” he said. “So the most valuable thing would be scientific.” A letter Einstein wrote to his mother went for $6,000.

Editor’s note: Benyamin Cohen is working on a book about the modern relevance of Einstein, to be published Fall 2023, and helps run the official social media accounts of the world’s favorite genius.

Einstein manuscript goes for $11 million at auction, highest ever paid for the genius’ memorabilia