The reparations checks Amira Gezow received every three months from the German government mattered to her. She had worked to get them and had helped other survivors secure theirs.

For Gezow, a German-born woman who lost both her parents in the Holocaust, the checks were, monetarily, a pittance: 72.55 euros per month, or about 240 dollars per disbursement. But they represented a measure of accountability, a tangible admission of fault, even if the totality of her loss could never be repaid. She received the checks from the late 1980s until she died in January at the age of 92.

A few months after her death, her daughter Ayelet Gezow received an unexpected letter from the German government. It contained a ruthless calculation: Amira Gezow had died two months into her most recent three-month disbursement period. Germany wanted the last 72-and-a-half euros back. 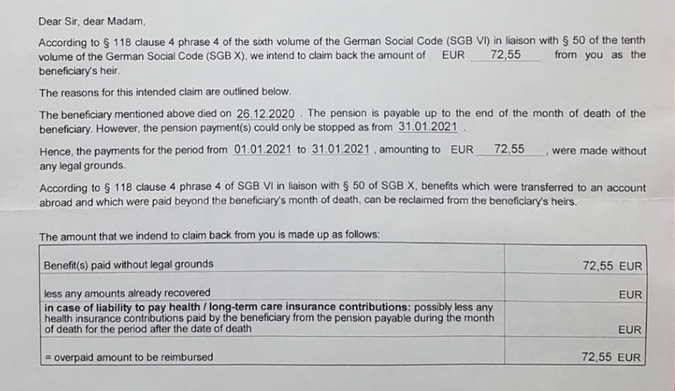 The letter demanding repayment of 72.55 euros in reparations. Courtesy of Ayelet Gezow

At first, Ayelet said, she was shocked at the audacity of the message. Then, she fired back: “After you killed my grandparents, you expect to receive this money out of my pocket?”

Gezow was navigating the somewhat arcane math and bureaucracy of Holocaust reparations. The logic of these payments can be infuriating or dumbfounding — for example, no payments are made to survivors because they lost family members, or even their entire family, during the Holocaust — and even with the payments some survivors have slipped into poverty. Reparations did not replace, or aim to replace, the generational wealth many European Jews had stolen by the Nazis. Yet their symbolic importance endures.

The youngest of four, Ayelet Gezow had not been receiving the checks and said she was barely aware of her mother’s finances during her lifetime. And as she pointed out, reparations hardly covered her mother’s cost of living or defrayed her medical bills late in life.

Yet the German consulate in New York was obstinate about getting the money back. When she called seeking an explanation for the letter, Gezow says she was brusquely rebuffed.

“She was yelling at me, saying I was stealing money from Germany,” she recalled of the conversation with a consulate employee. “You would think that with the history, there’d be some decorum, some sensitivity — something.”

Not long after the Fall of France in 1940, young Charlotte Marguerite Siesel was thrown in a cattle car with her parents and transported from Mannheim to Gurs, an internment camp in the Pyrenees. Later, when the family was in transit to Auschwitz, a group of nurses claiming to be the Red Cross — they were actually women from the French Resistance — boarded the train and rescued the children from captivity. She would never see her parents again: they were deported to Auschwitz in 1942.

The Resistance helped her get to the Swiss border, where she connected with a family she knew who took her in. After the war, she moved to Israel through Hashomer Hatzair, a socialist youth movement that placed her at Kibbutz Eilon, near the Lebanese border. It was in Israel that Charlotte became Amira, and on the kibbutz where she met her husband, Tzvi Gezow, and where they raised Ayelet and her siblings. 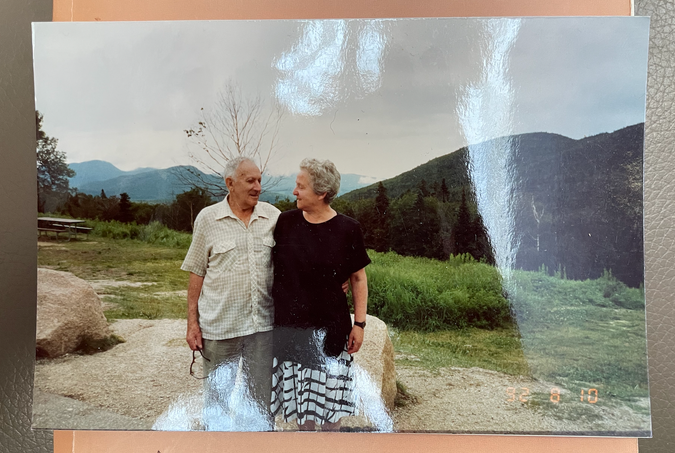 Amira Gezow and her husband, Tzvi, in 1992. Courtesy of Ayelet Gezow

Germany began paying reparations to living victims of the Nazis in 1951, but it was not until after her children were born that Amira Gezow began seeking reparations, her daughter said. But because information about how to get them was hard to find, it took years to get her application approved. Undeterred, she proceeded to help other Israel-based survivors, including other members of her kibbutz, apply to receive the payments.

“It wasn’t retroactive by any stretch of the imagination,” said Ayelet Gezow.

It was around the same period, in the 1980s, that Gezow began speaking about her experience during the war, first in large public engagements and later with her children privately. She eventually self-published a memoir.

One of Ayelet Gezow’s immediate questions about her mother’s experience was why the checks had been so small.

Charged with disbursing hundreds of millions of dollars from Germany to survivors each year, the Claims Conference decided decades ago that trying to calculate the relative worth of suffering was pointless, and that everyone who met survivor criteria would be entitled to the same amount. According to Greg Schneider, executive vice president of the Claims Conference, Gezow was one of about 50,000 Holocaust survivors who received that monthly payment, about 580 euros a month.

The 72-euro payment, he said, would have come from another fund, most likely a pension called ZRBG for survivors who were confined in ghettos and work camps. Unlike the Claims Conference disbursements, however, the ZRBG payments refer to a set of variables to calculate how much each survivor receives. Schneider said 72 and a half euros “seems like a very, very low amount — kind of shocking,” adding, “I don’t know of a lot of survivors who are receiving that.”

But, he said, there were other funds through which she might have received money: one for Israeli survivors (established by bilateral agreement with Germany in 1952); and a child survivor fund, through which the Claims Conference disburses one-time payments of 2,500 euros (about $2,800) to child victims of Nazi Germany.

“Depending upon what country you were from, and how old you were, and what persecution you experienced, you might be entitled to a range of different pensions or one-time payments,” Schneider said.

In an email to the Forward, the German consulate in New York said it could not determine what specific fund had been disbursing the 72 euros per month, or how it had reached that number. But it said the money given early to Gezow, once reclaimed, would go back into a pot earmarked for survivors.

“Pension payments are meant to compensate Holocaust survivors for their personal sufferings,” wrote Anton Klix, head of the consulate’s political department. “Any amount that was intended for a period after the passing of a survivor could not serve this purpose.

“The Restitution Offices, with good intent, try to reclaim every overpaid amount,” he continued, “because every euro that is refunded to the Restitution Office will be credited to the restitution fund and will be used to help other Holocaust survivors who are in the need for financial support.”

Additionally, an assistant to Klix said that 72 euros exceeded the minimum for overpaid funds — in other words, up to a certain amount, no one would have been asked to pay the money back. She was unable to say what the limit was.

Nevertheless, she wrote a check out to the German government for 72.55 euros. But the entire experience left her concerned for how Germany would treat other survivors.

“All I wanted was for the Germans to acknowledge my mother as a human being,” she said in an email. “All they needed to say is ‘We are sorry for your loss.’”