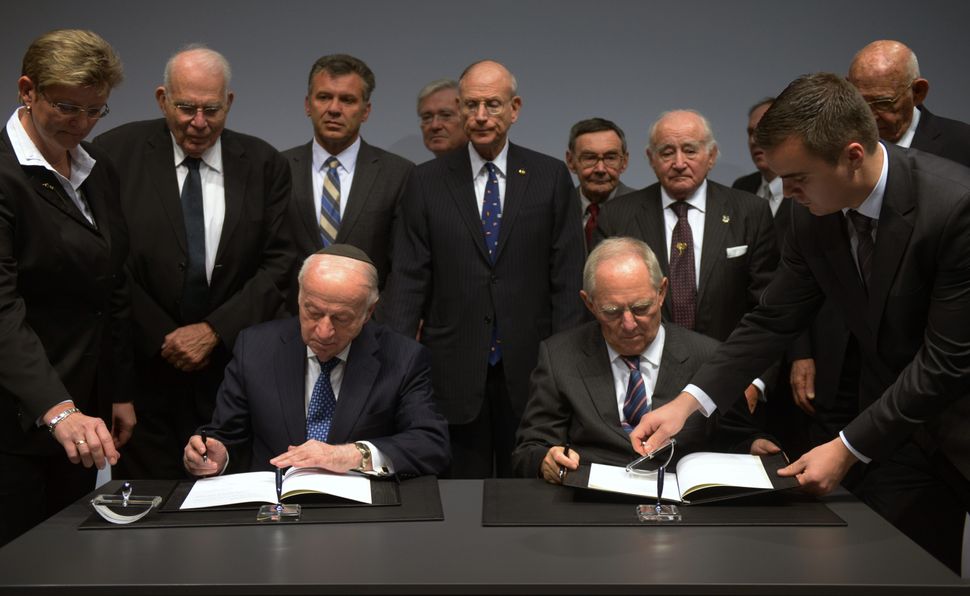 German Finance Minister Wolfgang Schaeuble (R) and Julius Berman, Chairman of the Conference on Jewish Material Claims Against Germany sign a revised version of the Article 2 (Claims Conference) during a ceremony to commemorate the 60th anniversary of the Luxenbourg Agreement on November 15, 2012 in Berlin. With the Luxembourg Agreement West Germany assumed responsibility for the Holocaust and paid reparations to Jewish survivors. The new treaty widens the group of people eligible for payments and tailoring assistance to elderly recipients’ needs. By Johannes Eisele/AFP via Getty Images

I was equally impressed by the myriad neighborhood memorials that many visitors might easily miss: a wall at a junior high school that students had plastered with the names and brief biographies of Jews sent to their death; a street corner sculpture that shows a Jewish tailor’s table and chair falling over as he is seized by Nazi police in the middle of the night.

The German nation has openly acknowledged its past atrocities committed during the Holocaust with statements and memorials — and by paying $92 billion in reparations to Holocaust survivors over the past 70 years. The German government has done an admirable job of confronting its past, but, as Luke Holland’s new documentary “Final Account” reveals, the same is not necessarily true of the German people who lived through the Nazi era and refuse to acknowledge past evils.

In the United States, in contrast, we have failed to reckon with the consequences of centuries of slavery, both on our nation and as a people.

As laws advancing revisionist history sweep our nation’s state legislatures, Americans who favor a national reckoning with our own complicated past would do well to take a lesson from Germany. If we want to truly heal as a nation, we must first acknowledge both the long history of slavery and the pain its legacy still causes — and take tangible steps to right our collective wrongs.

On September 27, 1951, West German Chancellor Konrad Adenauer declared that his government was ready to pay lifetime monthly stipends to the survivors — Jews and non-Jews — of concentration and forced labor camps. This included people like my father, who was sent from the Warsaw Ghetto to Dachau, and my mother, who was sent from the Lodz Ghetto to Auschwitz, Bergen-Belsen, and finally to a slave labor camp in Salzwedel, Germany. The several hundred dollars they received each month eventually helped them buy a bakery — a trade my father learned at Dachau.

Not all Germans agreed with their government’s decision. In “Final Account,” Luke Holland reveals how most of the 250 Germans he interviewed who lived through the Nazi era — many of whom belonged to the SS or served as concentration camp guards — still refuse to acknowledge the devastating consequences of their actions. Herman Knoth, an officer in the Waffen SS, insists the SS “had nothing to do with the terrible and brutal treatment of Jews and dissidents and the concentration camps… I will never regret being with that unit.”

Likewise, when told by Holland that six million Jews had died during the war, Karl-Heinz Lipok, who served in the SS Death Head Unit, was even more unrepentant. “I don’t believe it. It can’t be. Excuse me, but it’s the Jews who put it like that. I deny it. It didn’t happen.”

Only one of the dozen men interviewed, former SS officer Hans Werk, acknowledged his and his nation’s complicity. As he told a group of German high school students with tears in his eyes, “I am ashamed today that I joined this organization [SS]. I am ashamed of the crimes committed. Do not let yourself be blinded” to the truth of the nation’s past. Werk’s views were not shared by all the students. One xenophobic teenager attacked him for saying he was ashamed of being a German—a view shared by many contemporary rightwing nationalists.

But just because there was populist pushpack does not mean it wasn’t the right thing to do, a lesson we’d do well to internalize even today.

We can learn two additional things from Germany’s approach to reparations: to truly heal our country, we must collectively acknowledge the nation’s long history of slavery and racism, and we must make reparations to our Black community.

That’s not to say that it will be easy. When Germany decided to pay reparations, the individuals who directly suffered were still alive and easily identifiable. Not so with the descendants of slaves today.

It is now 156 years since the 13th Amendment freed U.S. slaves. The year that amendment was ratified, Congressman Thaddeus Stevens and Senator Charles Sumner greeted it with joy — but insisted that political freedom without true economic freedom was only half a victory.

These Radical Republican leaders believed the best way to solve postwar racial inequality was by giving poor Blacks and poor whites enough land and initial government support to allow them the opportunity to become a large middle class, capable of voting for politicians who represented their common class rather than divisive racial interests.

Today, one option is to return particular parcels of land to the descendants of the Black families that once owned them; that would repair the damage suffered by particular families, but not by an entire race. Likewise, reparations that offer cash to descendants offer immediate benefits but not necessarily long-term solutions to wealth inequality. We need an approach that could collectively raise the economic status of an entire race.

Education has long been seen as one of the most lasting paths to generational mobility, and targeted investment in Black communities could be a path to uplifting an entire generation. Instead of cash grants to individuals, Congress could create an “American Reparations Educational Fund” that would provide every Black man or woman who is admitted to an American college or technical trade school with a scholarship that would cover four years of tuition, food and housing. Such a fund would also direct money into the public schools in underrepresented minority communities that provide pathways to post high school education.

Not every Black student wants to go to college or a trade school, but those who do will receive the kind of education that would allow them to accumulate wealth and to pass it on to their children. This is a long-range solution that will take decades before its full benefits are realized. But waiting decades seems a small price to pay after waiting hundreds of years for recognition of the pain Black Americans have suffered since the 1600s.

As a nation, we have had several critical moments to reckon with the unpleasant truths of our past: after the Civil War, after World War II, and today. Like Stevens and Sumner, I believe creating a substantial Black middle class would radically alter race relations, something we have seen happen in contemporary Atlanta.

There’s no easy solution to ending racism and righting the wrongs committed in the past. But granting a significant number of Black Americans the opportunity to join the American middle class would be a great start.

Steven J. Ross is Dean’s Professor of History at USC and author of the Pulitzer Prize finalist “Hitler in Los Angeles: How Jews Foiled Nazi Plots Against Hollywood and America.”