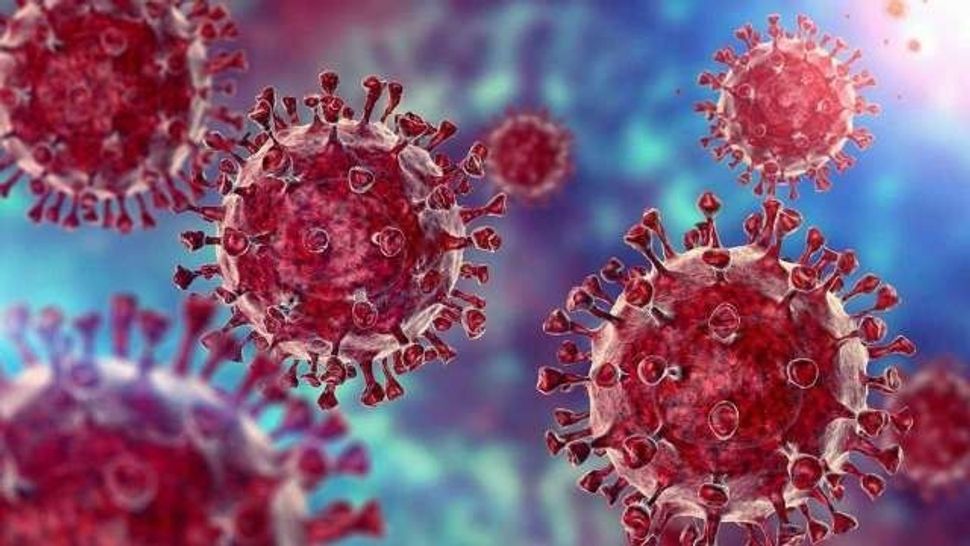 The Omicron variant of the virus that causes COVID-19.

The new, fast-spreading Omicron variant of the COVID-19 virus is prompting rabbis, brides and synagogue-goers to wonder whether they need to take extra precautions to keep Jewish gatherings safe.

Most Hanukkah events seem to be going on as planned and anxiety over the variant is low-level — but it’s there.

“Our phones are ringing with people asking if there are any new protocols and what happens if some of their guests bail on them,” said Bob Wilk of Gala Event and Food Artistry, a kosher caterer in Melville, L.I. “The public is nervous but is not going into panic mode, such as forcing a postponement of their parties or requesting a reduction in the number of guarantees.”

Rabbi Deborah Bravo of MakomNY, a Jewish community that meets at the Bethpage Worship Center on Long Island, said COVID-19 protocols aren’t changing in light of Omicron. At the same time, she’s re-evaluating her plans to begin hosting Shabbat dinners for families at her home, and to add food to the Shabbat kiddush in January.

“We’re hesitating,” Bravo said, citing the little scientists know of Omicron. Its response to vaccines may be unclear for several weeks.

Like many rabbis, Bravo is consulting with her community’s medical advisory team, hoping for guidance that can help clergy and lay leaders make smart decisions about synagogue programming. Bravo spoke with a pulmonologist on MakomNY’s team. “He said he said he didn’t think it is going to be a big deal but didn’t know for sure. So we’re waiting to see more data.”

“I have a feeling we are not going to change the protocol,” she added.

Rabbi Joseph Potasnik, executive vice president of the New York Board of Rabbis, has been having similar conversations about Omicron.

“We’re worried,” he said. “It is a time of concern. We have been told that outdoors is safer than indoors and so holding outdoor events is the better option.”

Some congregations had extra precautions in place before they had even heard of Omicron, a variant first detected in South Africa earlier this month and which has since spread to Asia, the Mideast, Europe and North America. Scientists believe that it is highly transmissible, but say vaccines are likely to protect those infected with it from serious cases of COVID-19.

The annual Hanukkah party at the Dix Hills Jewish Center on Long Island was moved a month-and-a-half ago from inside the synagogue to the outdoor parking lot — just to be safer.

“Pre-COVID we had 400 to 500 people indoors,” said Rabbi Howard Buechler, spiritual leader of the Conservative congregation. “We have no guidance yet on Omicron, we just feel such a crowd cannot be indoors in the current pandemic reality.”

A similar approach has been adopted at the Hebrew Institute of Riverdale — The Bayit, an Orthodox congregation in the Bronx, where congregants keep their masks on indoors and where gathering spaces are large and allow people to spread out.

“I really believe our synagogue, and synagogues in general, can offer controlled and managed community spaces for people to come together safely in these times in which we so desperately need community,” said Rabbi Steven Exler. “We don’t want to be hasty and add unnecessary restrictions, adding fear.”

Rabbi Adam Starr, spiritual leader of Congregation Ohr HaTorah, an Orthodox congregation in Atlanta which includes members who work at the Centers for Disease Control and Prevention, said he hasn’t instituted any changes yet in light of Omicron, but expects that the variant may prevent the congregation from lifting some precautions he had planned to discuss with the synagogue’s medical advisors.

He added that the biggest impact the new variant has had is on those who were planning trips to Israel. The Israeli government closed its borders Sunday evening to all foreign tourists for the next two weeks due to Omicron.

Itay Milner, a spokesperson and Consul for Media Affairs at the Consulate General of Israel in New York, said most of Israel’s response to Omicron is at its borders, and not within Israel. The Miss Universe pageant slated to be held in Eilat Dec. 12 will not be impacted, because contestants will be granted waivers to travel to the country, he said.