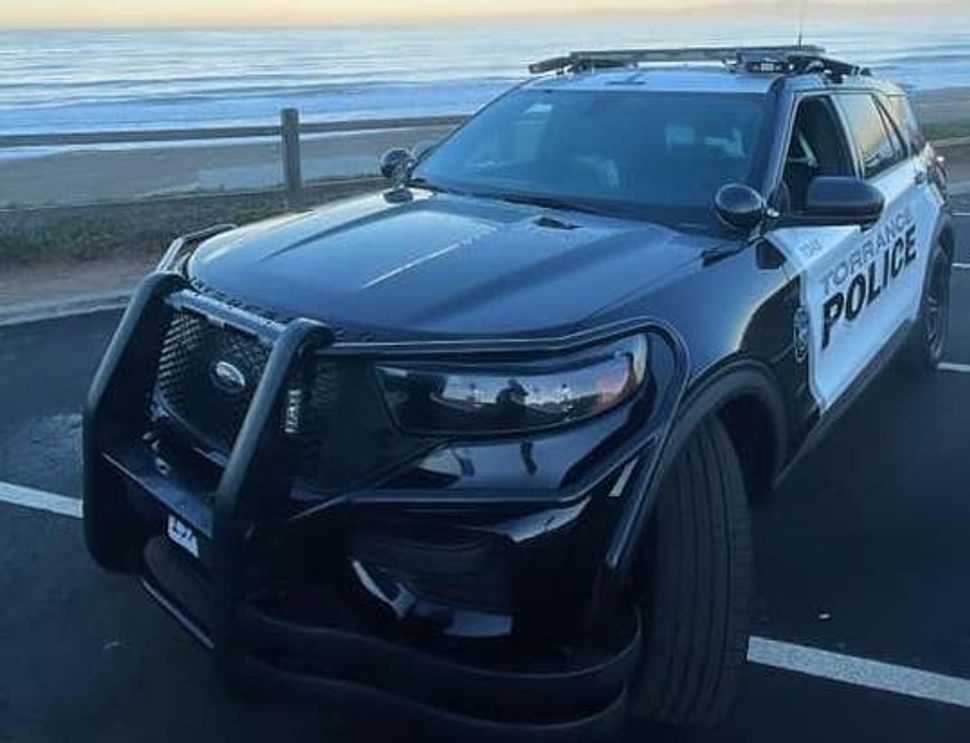 A government investigation that began after a pair of officers were charged with spray-painting a swastika inside a resident’s car has revealed that racist and antisemitic speech was rampant in the Torrance (Calif.) Police Department, according to a Los Angeles Times story published Wednesday.

The Los Angeles District Attorney’s office, which reviewed thousands of text messages as part of an ongoing investigation, found that officers from the city, which is about 20 miles south of Downtown LA, had talked about “gassing” Jewish people, in addition to frequent use of slurs and hate speech against Blacks and members of the LGBT community.

“No Blacks, No Jews,” read a text message sent by one officer, Maxwell Schroeder, then a Torrance police recruit and now a member of the Long Beach Police Department. The officer who texted about gassing Jews was not identified in the story.

The investigation has already resulted in the dismissal of 85 criminal cases in county and city courts involving the officers, and could eventually result in the reversal of hundreds of convictions. The 13 officers who were identified by the Times through confidential sources have been listed as a witness in nearly 1,400 cases, according to district attorney’s office records accessed by the Times’ James Queally.

The text messages went on for years, prosecutors told the Times. The exact number of officers involved in the scandal is unclear, but a Torrance Police Department spokesman said 15 officers had been placed under administrative leave in relation to the investigation.

In an interview with the Forward, Rabbi Didi Thomas, who leads what she says is the only synagogue in Torrance with a building, Temple Emet, said she had never had a problem with Torrance police, who patrol outside the synagogues on Shabbat and Jewish holidays.

Earlier this year, when a petition circulated among the Los Angeles Jewish community demanding accountability from the Torrance Police Department, Thomas refused to sign it.

“There was no part of it that had anything to do with the good that’s being done, and what’s being done to combat it,” Thomas said. “They’ve protected us. When we’ve called, they’ve been there.”

The case was opened by LA District Attorney George Gascón during the prosecution of Cody Weldin and Christopher Tomsic, who in January 2020 allegedly spray-painted a swastika on the back seat of a car that they had ordered towed after responding to a call.

According to Gascón, he became aware of the case in July of last year and wondered whether racist on-the-job behavior was really isolated to those two officers.

“I questioned whether there was any other things that would lead us to believe that this is not sort of a single crime event,” he told the Times. “I actually made some comments about how, generally, when someone does this kind of stuff, there are bigger patterns of behavior. So, I started asking if we had checked for text messages.”