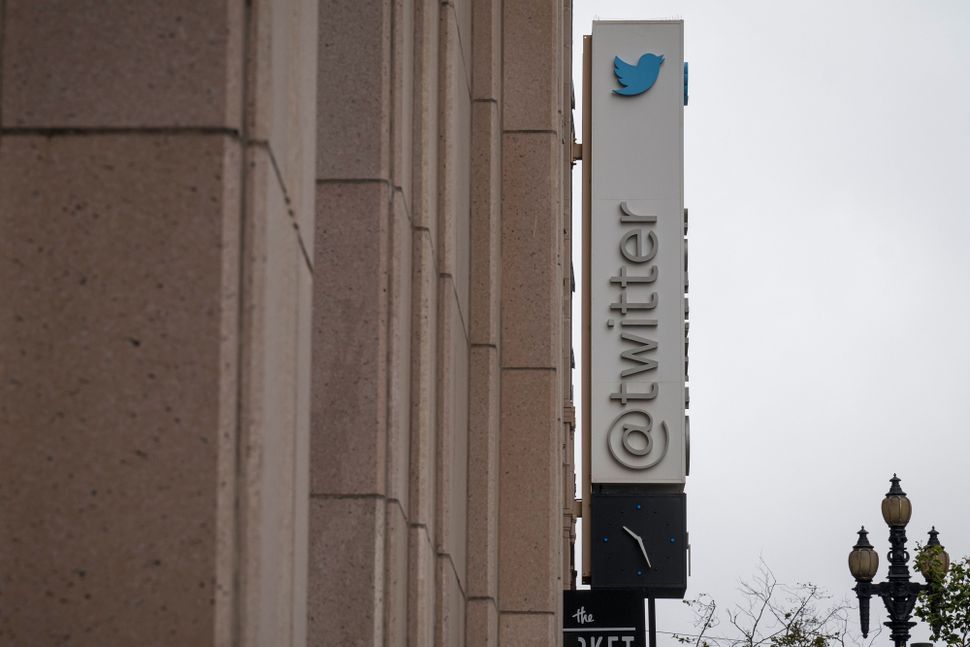 Signage is displayed outside of Twitter headquarters in San Francisco, California, U.S., on Thursday, July 16, 2020. Photo by Getty Images

A pair of grainy photos show a man delivering what appear to be a Nazi salute, decked out in military gear in one image and dressed as the Joker — replete with a full face of unsettling makeup — in the other. Oren Segal, who tracks extremism for the Anti-Defamation League, posted the photos on Twitter last week with text identifying the man pictured as Paul N. Miller of Fort Lauderdale, Florida.

“He is a white supremacist who glorified hate and violence,” Segal wrote.

Seeing some concerning reports about @Twitter enforcing its new policy to silence people who expose violent extremism. Can I no longer do this?:

This is Paul N. Miller from Fort Lauderdale, FL. He is a white supremacist who glorified hate and violence.https://t.co/HppS8vJGTL pic.twitter.com/CDE0jet2A0

Segal’s post wasn’t exposing Miller, who was sentenced to prison in September on federal weapons charges. Instead, it was a test of a new privacy policy unveiled by Twitter last week that many researchers are worried will stymie the ability to track and report on hate groups and extremists.

The policy, announced on Nov. 30, bans users of the social media platform from posting photos or videos of “private individuals” without their permission. The change sparked a quick backlash from researchers like Segal, who fear that the fringe extremists they seek to expose will be protected by the new policy.

So far, Segal’s post of Miller has remained online, but other users of the platform say their posts have been removed. “There’s just a general concern about efforts that may be well intentioned — to prevent doxxing or harassment of people — could have the unintentional consequence of silencing those who want to shed light on people who pose a threat,” Segal said.

Twitter’s new policy already appears to be winning fans on the far right, with suspects in the Jan. 6 Capitol riot reportedly attempting to have photos of themselves taken down from the platform, and QAnon and Proud Boy supporters having done the same.

But the announcement that the social media giant would tamp down on the kind of naming and shaming that often takes place on the website also won some praise on the pro-Palestinian left. For years activists have complained of coordinated social media harassment campaigns against them.

Websites like Canary Mission, which was established in 2014, and newer enterprises like StopAntisemitism, regularly post profiles of individuals they allege are antisemitic or promote antisemitism. StopAntisemitism, for example, regularly posts the names, photos and biographical information of individuals the website dubs “Antisemite of the Week,” a label bestowed on public figures like comedian Dave Chapelle as well as little-known college students.

Critics argue that both websites, and other smaller operations that do similar work, are disproportionately focused on Palestinians and pro-Palestinian activists and unfairly label their political speech as antisemitic — leading some to celebrate the new Twitter policy.

“CANARY MISSION IS OVER PARTY???????,” Liza Mamedov-Turchinsky, a UC Berkeley student and member of the pro-Palestinian Jewish Voice for Peace, wrote on Twitter shortly after the privacy policy was announced.

A spokesperson for StopAntisemitism said that two of the organization’s posts were removed under the new policy.

The Twitter policy allows photos to be posted of public figures, but it doesn’t specify who meets that standard.

Canary Mission, which is currently running a campaign against University of California student Yasmeen Mashayek over social media posts it deems antisemitic, said that while it opposed the policy it was still able to operate under the new guidelines.

“Canary Mission has successfully combated antisemitism despite the limitations placed upon it by social media giants,” the organization, which is run anonymously, said in a statement to the Forward.

“Canary Mission, the account that doxxes Palestinian students for their political activism and misrepresents it as ‘support for terrorism’ and antisemitism, is still very much up,” a Twitter user who goes by Disorientalist wrote last week. “We knew this private media policy would be applied selectively.”

Somehow everyone but canary mission is going to get wrecked https://t.co/ffRHa0zwF9

Ben Lorber, an analyst at Political Research Associates, said that if Twitter wanted to impose a policy cracking down on users who post photos of individuals in order to reduce harassment it needed to find a way to distinguish between exposing neo-Nazis and pro-Palestinian college students.

“You ultimately do have to draw the line politically,” said Lorber, who has an 1,800-word profile on Canary Mission. “Organizations like Canary Mission and StopAntisemitism are large and well-funded institutions that in my opinion are engaging overwhelmingly in Islamophobic harassment and bullying against students who are standing for human rights.”