Lissy Jarvik’s personal library catalogued her kaleidoscopic range of interests. Among hundreds of spines on her shelves were mystery novels, art monographs, history books and landmark volumes on feminist theory. Titles about the Holocaust and psychology were windows into the life of a woman who escaped the Nazis and made the study of aging her life’s pursuit.

But when Jarvik died in October at 97, her granddaughter faced a dilemma: a bibliophile’s literature collection makes for a complicated heirloom. Too substantial to keep. Too precious to sell. Too assorted to donate in bulk. And no one with a heart wants to throw out books.

So Leah Jarvik resolved to give all of her grandmother’s unclaimed books away — 385 in total — one by one. To strangers.

“Grandma loved to give gifts and hated waste,” she wrote atop an online form for interested recipients, which she shared on social media. “Now each book is a gift to someone. And the project is a gift to me.”

Using form submissions to match each book with the right reader and a GoFundMe to cover shipping costs, Jarvik, 24, who resides in Los Angeles not far from where her grandmother lived, has found a home for about half of the books so far, and mailed or hand-delivered about 100. Pieces of Lissy’s library can now be found in 26 states and eight countries, in Asia and Europe — an international legacy for a worldly woman. 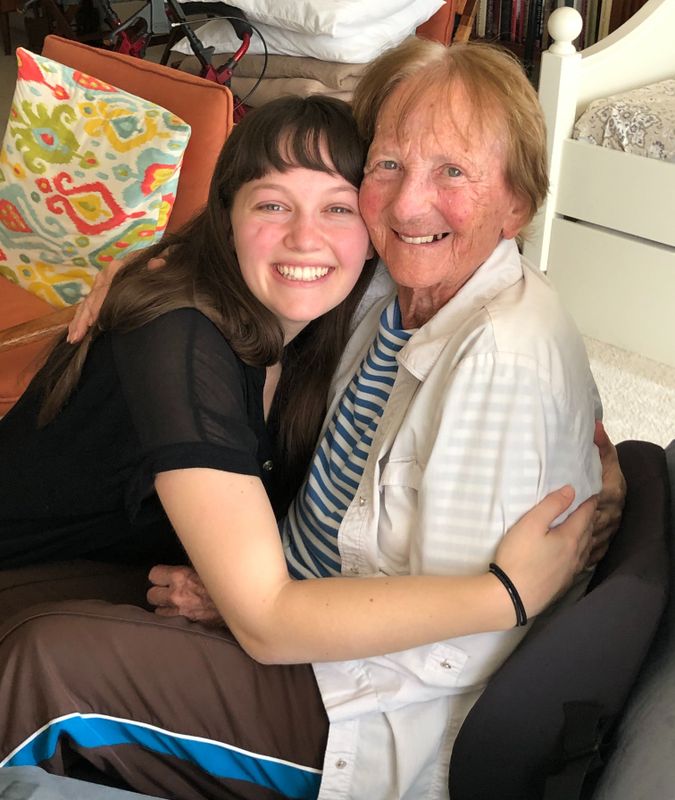 Leah Jarvik and her grandmother, Lissy Jarvik, who died in October. Courtesy of Leah Jarvik

Lissy Feingold was 16 in 1940, when she escaped to France with her family just before their native Netherlands was invaded by the Nazis. France was hardly safer. But a little-known Portuguese consul stationed in Bordeaux named Aristides de Sousa Mendes was secretly authorizing visas for thousands of Jews trapped in France. The Feingolds were among them.

At that point she had already embarked on a landmark 20-year study of nature-versus-nurture in twins. Later, as a geriatric psychiatrist and UCLA professor, she authored pioneering research into Alzheimer’s — the disease that eventually claimed her life.

Hence, enough books on aging, end-of-life and Alzheimer’s to require separate categories for each on the request form. Jarvik, who is an actor, is deliberate when it comes to giving those out — “It can be a lot to receive a book in the mail that’s like, ‘How We Die’” — but she says the piles are shrinking.

Even one she figured would be impossible to re-home, Bram Dijkstra’s “Idols of Perversity: Fantasies of Feminine Evil in Fin-de-Siècle Culture,” made a soft landing with her former theater professor.

She credits people’s forthcoming responses to the form’s open-ended “Describe yourself” prompt for the serendipitous matches.

“People who I don’t know will give such beautiful little snapshots of their life,” she said. “And it’s really beautiful to me to be able to just select what I feel like it’s a perfect for them and know that there’s this little gift headed their way.”

[A few weeks ago, this reporter saw Jarvik’s post in a neighborhood Facebook giveaway group and filled out the form, indicating an interest in books about the Holocaust, Judaism and/or art. On Sunday, a book on Chagall’s Jerusalem Windows, printed in 1975, arrived. It now rests on the living room coffee table, under similarly colorful lithographs by Jewish artist Ernst Neizvestny.] Jarvik delivered this book to a reader who expressed interest in art and Judaism. By Louis Keene

The GoFundMe has raised about $1,450 as of Tuesday, exceeding the goal of $1,200. Jarvik says whatever funds are left over after the last book is shipped will go to the Sousa Mendes Foundation, which is building a museum in the late hero’s old home

Sifting through the collection, Leah has glimpsed her grandmother’s inner life. Some of the books can’t be donated because they’ve had chunks pulled out of them — Lissy would bring books with her on trips only a few chapters at a time. Others contain inscriptions thanking her for inspiration or wisdom. Many contain copious annotations.

“This project has just brought me nothing but joy,” she said, “and love.

“Part of me knows that there’s gonna be kind of a strange selection when I start getting down to the last books,” she added. “But the other part of me thinks that actually, everything’s going to work out perfectly.”