Executives at Entrata, the Utah company whose founder was ousted last week over an antisemitic screed, called on a local rabbi to help them understand the roots of their former colleague’s bigotry.

Rabbi Sam Spector was met by a level of angst and a gift he did not expect on Friday. He left Entrata’s offices with a six-figure pledge from the company to complete his synagogue’s capital campaign — funds that will allow the congregation to, among other needs, buy a new boiler and repair damaged Torah scrolls.

“They’re all just crying and saying this has been the worst week of any of their lives,” Spector said.

Spector said he walked executives at the property management software company through the history of classic antisemitic conspiracy theories like the blood libel and the claim that Jews were responsible for spreading the Black Plague through Medieval Europe. 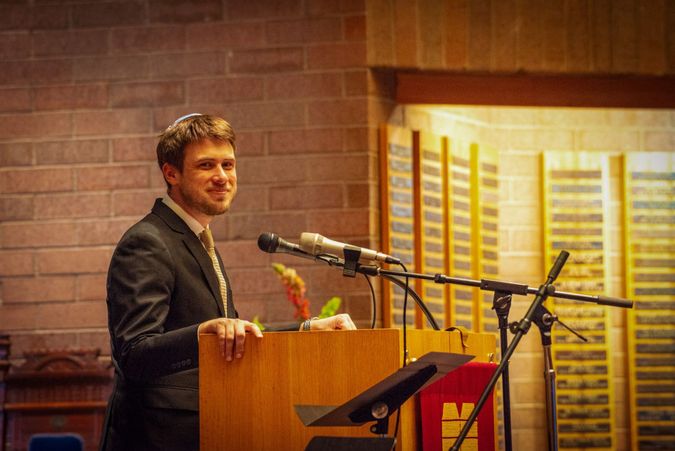 Rabbi Sam Spector said he was taken aback by Entrata’s offer to cover much of his synagogue’s capital campaign goal. Courtesy of Congregation Kol Ami

But Spector said Entrata’s chief executive Adam Edmunds wanted to do more –- something big for the state’s Jewish community –- and asked Spector what his Congregation Kol Ami, which serves 350 families in Salt Lake City, needed most.

“My synagogue is falling apart, basically,” Spector said. The building is 50 years old. The bathrooms, seating and even the prayer books haven’t been replaced in decades. The total for the boiler alone, crucial during Utah winters, came to $150,000.

“They said, ‘We’re going to take care of all that for you,’ and they made the largest donation we’ve ever seen,” Spector said.

The scandal at Entrata began last week when David Bateman, its former CEO, emailed a rant to leading figures across Utah claiming that the COVID-19 pandemic and vaccine were “a sadistic effort” to kill Americans orchestrated by Jews, who he also accused of taking over the Catholic Church.

Bateman, one of the most prolific donors to Republican and conservative causes of the state, was known for his fringe views. But this email had gone too far, and he was forced to sell all his shares in Entrata, the software development firm he co-founded in 2003.

Spector declined to share the exact amount of the Entrata donation, but said it was a six-figure contribution that would allow the synagogue to complete most of a capital campaign it had been struggling to fund.

“So many of these things we had no clue how we would get them,” Spector said. “This is a total game changer for us.”

Entrata also plans to invite Spector back to address its entire workforce of 2,500 employees located in both the United States and India, and Gov. Spencer Cox has invited Spector and other Jewish leaders to meet with him to discuss how to combat antisemitism in the state.

“We are fully committed to continuing to work with Jewish leaders to provide education for not only our company but for the broader community as we work with them directly to fight antisemitism,” Edmunds, the CEO, said in a statement to the Forward. He also confirmed the company’s donation to Kol Ami.

Bateman, a leader in the Silicon Slopes community –- Utah’s answer to California’s Silicon Valley –- is no common internet troll. According to an investigative report by the Salt Lake Tribune, Bateman was by far Utah’s biggest political donor in the 2018 election cycle. More than half of the $777,454 he spent that year went towards fighting SB 54, a law that weakened the power of the Utah Republican Party in the primary process, and which the party incurred massive debts fighting in court. Bateman agreed to pay off the $410,000 debt —- rescuing the state party from bankruptcy —- on the condition the party not drop the lawsuit.

When Spector first heard about the email, he figured it for just another case of antisemitism in Utah. In May, a swastika was drawn on the Salt Lake City Chabad center. Ten years ago, a man fired three shots through Kol Ami’s windows. The congregation gathered in 2018 for active shooter training after the Tree of Life massacre in Pittsburgh.

Spector said he was heartened to see the company and political leaders across the state condemn Bateman, but never expected that Entrata’s response would go beyond severing its relationship with their founder.

“We hear stories about people who hate us constantly,” Spector said. “I have never seen any company step up in this way to say, ‘We’re going to do what we can to be a good ally and train our company to be good allies to the Jewish community.’”