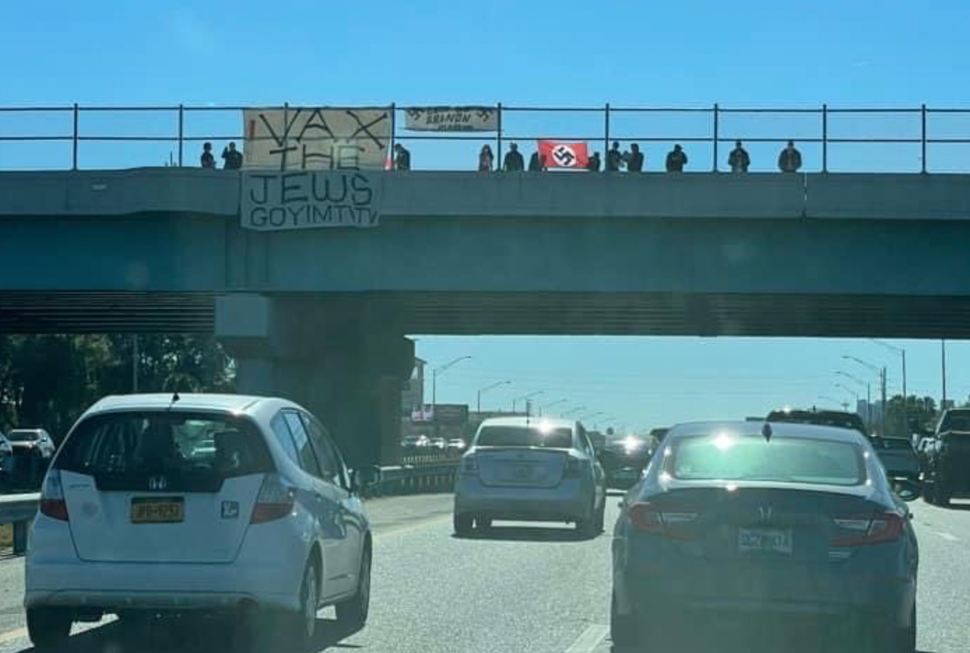 Neo-Nazi hang banner from overpass in Orlando. Courtesy of Twitter

Demonstrations by Nazi groups in Orlando, Florida over the weekend, timed to International Holocaust Remembrance Day on Jan. 27, prompted a wave of outrage on social media and an outpouring of criticism from Florida politicians and officials.

The fury expanded further after a representative of Florida Governor Ron DeSantis suggested that one of the rallies might have been staged by Democratic activists. Meanwhile, the governor, asked about the Nazi rally at a press conference Monday afternoon, did not condemn the demonstrations, instead accusing Democrats of trying to “smear” him and use the Nazi rallies for political gain.

On Sunday, a group hung a banner saying “Vax the Jews” and another with swastikas and the right wing slogan “Let’s Go Branon” – a misspelling of the anti-President Joe Biden phrase, “Let’s Go Brandon” — from an overpass over I-4, a major highway, between Orlando and Walt Disney World. Another banner featured GoyimTV, the video platform for the Goyim Defense League, which staged a similar highway demonstration in Texas last October.

On Saturday, a group demonstrating in a median near an Orlando shopping mall was videotaped with swastika flags, chanting “White Power” and “Heil Hitler,” yelling obscene antisemitic insults at people driving by, and mockingly urging them to call police.

In another widely shared video, members of the group appeared to assault a driver who got out of his car to confront them. Their largest banner was emblazoned with the name and logo of American Nazi group the National Socialist Movement, with its phone number and website.

Videos and photos of the two Orlando rallies had gotten millions of views on Twitter by Monday morning. Both rallies were small, with approximately 20 people, and were soon shut down by authorities and counter-protestors.

The group StopAntisemitism.org reported that the shopping center rally was live streamed on the American Nazi Party’s website, with demonstrators shouting “The Jew is the devil,” “Jews rape children and drink their blood,” and “Jews brought slaves here” as well as racist insults.

Both demonstrations displayed links to national neo-Nazi and hate groups. The highway group’s banners also showed GoyimTV, an antisemitic video platform connected to the Goyim Defense League, which stages stunts to harass Jews, several of them in Miami last May.

One of the shopping center area demonstrators was identified by Antisemitism.org as National Socialist Movement leader Burt Collucci, who lives in the Orlando area. Collucci was indicted in Arizona earlier this month on felony and misdemeanor charges after he was arrested for pepper spraying and threatening to shoot a group of Black people in Phoenix, while he was there to lead another hate rally, according to Reuters. Colluci is slated to stand trial on Feb. 3.

Why are local PD allowing this? pic.twitter.com/QImbMY8xiJ

“To see Nazi scum so publicly come out and attempt to organize in Central Florida is absolutely disgusting.” she said in a statement. “They even spelled ‘Let’s Go Brandon’ wrong on their banner, which is what I would expect of Nazi idiots. Every politician in the State of Florida should condemn this behavior and push back against policies that feed into this dangerous ideology.”

Representative Carlos Guillermo Smith, who represents the district where the highway rally took place, tweeted “Hatred and anti-Semitism have NO PLACE in our community… All Floridians should be alarmed by the rise of extremism and white supremacy in our state.”

Photos and videos of the demonstrators on I4 and elsewhere are circulating on social media. https://t.co/mc9AoOsTha pic.twitter.com/AGENqxRemF

They were joined by condemnations from Orlando Mayor Buddy Dyer, U.S. Representative Val Demings, Florida House Speaker Rick Sprowls, and U.S. Senator Rick Scott, among others. Hundreds of miles south, Miami-Dade Mayor Daniella Levine Cava, who is Jewish, tweeted that “The rise in hate fueled by Neo-Nazis and white supremacists must be forcefully condemned… we cannot afford to be silent.”

The rise in hate fueled by Neo-Nazis and white supremacists must be forcefully condemned at every level.

Much like at other moments in history, we cannot afford to be silent. We cannot ignore it — and we must confront it wherever and whenever it appears.

Florida Governor Ron DeSantis’ press secretary Christina Pushaw, however, added to the uproar by tweeting “Do we even know they’re Nazis?” and suggesting the highway rally was a Democratic stunt.

Although Pushaw deleted the tweet, a screenshot was widely shared, becoming its own controversy as Pushaw, who is known for her combative social media interactions, attacked activists and Democratic politicians for asking why DeSantis hadn’t condemned the rallies.

When Eskamani tweeted that “I hope every Republican who gleefully says ‘Let’s Go Brandon’ realizes they’re empowering dangerous and hateful people,” Pushaw responded “So if you criticize the president, you’re automatically a Nazi? I don’t think that’s how it works.”

In statements to Newsweek and Florida Politics on Monday, Pushaw accused Democratic politicians of linking DeSantis to hate groups.

However, at a mid-afternoon press event in Palm Beach Monday, DeSantis’s only comment on the Nazi demonstrators was to say they should be investigated for protesting on the highway. The governor then accused Democrats of smearing him, elevating “a half-dozen malcontents” for “political gain,” and touting his administration’s relationship to Israel.

The Orlando rallies come after another antisemitic incident in Miami-Dade on Jan 22 and 23, when flyers proclaiming a Jewish “Covid Agenda,” with the logo for GoyimTV — the Goyim Defense League’s video platform displayed in the Orlando highway rally — were dropped on lawns in Surfside, a neighborhood with a large Jewish community. Police are investigating, according to the Miami Herald.

“You can’t normalize it,” Gelber told the Herald. “Throwing a flier on someone’s lawn is not far off from throwing a rock through someone’s window. You have to meet outrageous behavior with outrage.”