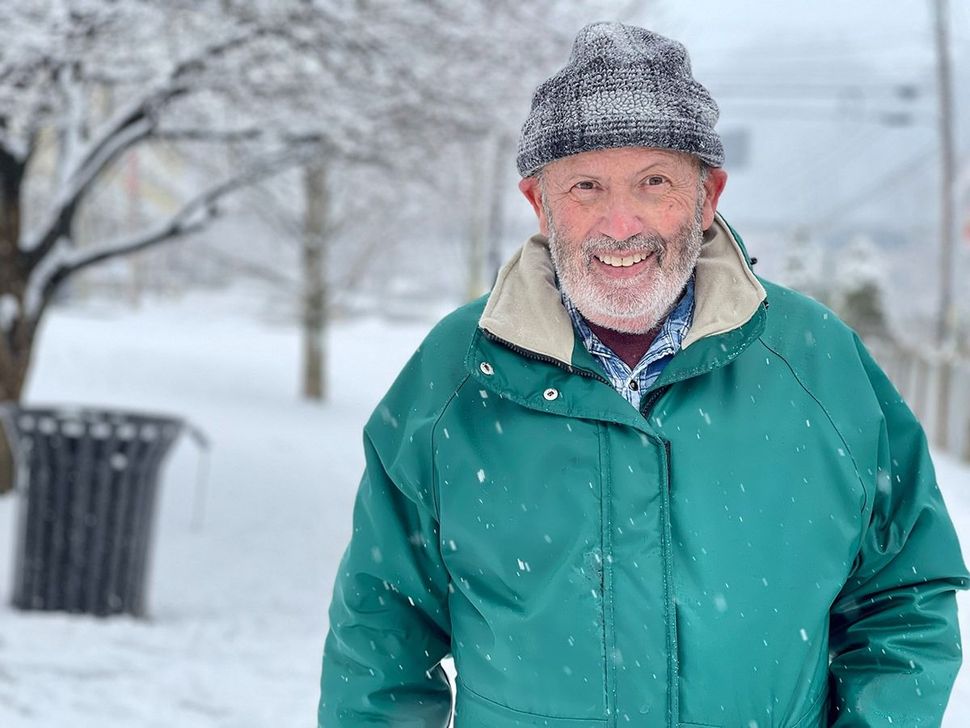 Editor’s note: This profile of Barry Wendell was first published before he won the primary.

MORGANTOWN, W. Va. — Barry Wendell was standing on the banks of the Monongahela River, a serpentine waterway that winds its way to Pittsburgh, 75 miles north. Here in West Virginia, one of the reddest states in the entire country, Wendell is swimming against another tide: as a liberal, gay, Democrat running for U.S. Congress.

Wendell, the husband of Rabbi Joe Hample, who helms Morgantown’s Reform synagogue, exuded a soft calm underneath layers of outerwear as he invoked the Talmudic sage Hillel to sum up his quixotic bid: “If not now, when? And if not me, who?”

By any measure, he is the longest of long shots. Former President Donald Trump won 68.6% of West Virginia’s votes in 2020, his strongest showing except for Wyoming (69.9%.) But Wendell, whose only prior political experience is two terms on the Morgantown City Council, has never shied away from a challenge.

Indeed, his Congressional aspirations are at once surprising and on point. Wendell, now 72, has worked for the government before – first as a substitute teacher in Baltimore, then in Miami as a claims agent for the Social Security administration. “They were looking for someone bilingual,” he likes to joke, “and I spoke Spanish and Yiddish.”

He moved to Los Angeles in the mid-1980s. There, he took acting classes, auditioned for countless commercials and made it onto an episode of “General Hospital,” where he had one line. “I was a maintenance mechanic at the airport,” he recalled. “And I was terrible.”

He pivoted to singing, a lifelong passion, and applied to cantorial school. He didn’t get in, but began working freelance as a High Holiday service leader at local synagogues.

A heart attack in 2003 made him rethink his priorities. “I thought: I really can’t be alone anymore,” Wendell recalled. “I need to have somebody in my life and I prayed that somebody would show up.” As if on divine cue, one Friday night while leading services, he noticed a man looking over at him. They bonded over Gershwin and went to a piano bar on their first date. They’ve been together ever since.

A blue bubble in a red state

As luck or fate or pure coincidence would have it, Wendell and I moved to Morgantown on the exact same day 10 years ago. We both arrived from bigger cities, following our spouses to new jobs here. My wife took a professorship at West Virginia University, the city’s largest employer, and Wendell’s husband, known to the locals simply as Rabbi Joe, was the new spiritual leader of Morgantown’s Tree of Life Congregation.

Rabbi Joe was, not that long ago, just Joe. He was working as a systems analyst for Wells Fargo until he had a midlife crisis, realized banking wasn’t his calling and enrolled at Hebrew Union College in 2004, at first in Jerusalem and then to their Los Angeles campus.

By the time Hample was ordained in 2009, it was the middle of the recession, and very few synagogues were shopping for a 52-year-old rookie. A congregation in Cheyenne, Wyoming, dangled a pulpit, but it was only a part-time gig. So Rabbi Joe took a job as chaplain at Pelican Bay State Prison, a supermax facility in the northwestern-most corner of California.

Rabbi Joe honed his pastoral skills and, in 2012, interviewed at more than a dozen synagogues. Before the Morgantown shul offered him the job, they asked to talk to his husband. The search committee had some concerns about Wendell’s blog and Twitter feed, where he was not shy about his anti-Republican views. He must have allayed their concerns, because three months later the couple was driving across the country to their new home in Appalachia. 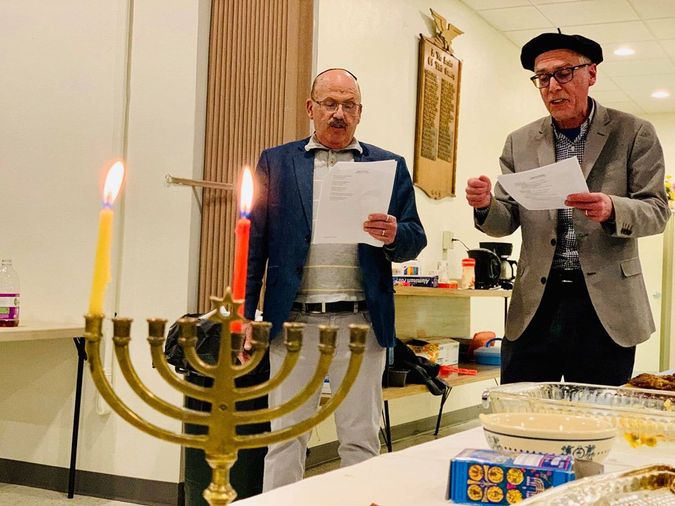 Barry Wendell (left) and Rabbi Joe Hample at a Hanukkah lighting event at the Tree of Life synagogue in Morgantown.

West Virginia consists of two major cities – Charleston in the south and Morgantown in the north. In between are more than 100 miles of small towns dotting the I-79 corridor. There’s Burnsville and Strange Creek and Weston, a town whose claim to fame is that it’s home to the Civil War-era Trans-Allegheny Lunatic Asylum. (Several TV series about ghost hunting have filmed there.)

There are about 2,300 Jews scattered among the state’s 1.8 million residents, according to the American Jewish Year Book, down from a peak of 6,000 in the 1950s. Several hundred Jewish students attend the local university, where there is also a Hillel and Chabad on campus.

We live in a college town, a progressive bubble in the middle of Trump country. Morgantown is the bluest area in the state. (President Joe Biden won the city by more than 40 points.) Because of the university, it’s a melting pot of a community where you could easily bump into a poetry professor or a Muslim doctor at the grocery store. Or Wendell. Although he avoids the Kroger near campus. Like that joke about a lone Jew on a desert island who builds two synagogues – the one he goes to and the one he’ll never step foot into. (“Too many students at that one,” Wendell explained of the Kroger he won’t go to.)

Morgantown is also where Wendell first ran for public office – winning a seat on the seven-member City Council in 2017, and reelection in 2019 (he opted not to seek a third term last year).

During his tenure, he helped hire a new city manager and passed a gay rights law. He was on the urban landscape commission and is particularly proud of how his efforts led to the saving of cherry trees in a town park that were set to be torn down during renovations. His name is on a plaque in front of the trees.

All politics is local

With West Virginia losing one of its three seats in the House of Representatives in the upcoming election cycle due to a declining population, Wendell saw not exactly an opening, but something of an opportunity. The new districts cut the state into two slices – one in the south, and one in the north, anchored by Morgantown, which has 30,000 residents plus the 30,000 university students.

If he wins the new district’s Democratic primary – he is one of two candidates running – he would likely face either David McKinley or Alex Mooney, the two incumbents whose current districts include the area. Wendell calls them “climate change deniers” and “full-on MAGA,” respectively.

McKinley is from Wheeling, in the western panhandle, and has been serving in Congress since 2011 and state politics since 1980. He is a former chairman of the West Virginia Republican Party and, at 74, the oldest of the state’s three House members and two Senators.

McKinley does not always vote with his party line. For example, he was one of 35 Republicans who joined all the Democrats in establishing the commission to investigate the Jan. 6 attack on the U.S. Capitol.

Mooney hails from Charles Town and has been in Congress since 2015. He previously chaired the Maryland Republican Party. Last year, Mooney supported a failed attempt to overturn the 2020 U.S. presidential election. Former President Donald Trump recently endorsed him.

Prof. John Kilwein, chair of the political science department at the university, does not give any Democrat much of a chance even in the redrawn district, never mind a liberal like Wendell.

His advice? “Copy what Senator Manchin does,” Kilwein said, referring to Senator Joe Manchin, the Democrat who has, notoriously, abandoned his party (and the president) on key votes. “Stay close to the center, and even cross over to the right. Focus on economic issues and avoid social issues because this is a conservative state.”

Wendell supports Biden’s stimulus package that is now stalled in the Senate (because of Manchin and Arizona’s Kyrsten Sinema). He’s in favor of a child tax credit and wants to ensure that benefits remain for coal miners suffering from black lung disease. “I’m also admantly pro-choice and obviously pro-gay,” he added.

Another important issue for him is immigration. “As the grandchild and great-grandchild of immigrants from Europe who left luckily early in the 20th century before the Holocaust,” he said, “I understand why people need to go to a safe place.”

If Wendell loses, as expected, he will go back to volunteer-teaching classes about the history of rock ‘n’ roll at a local seniors group. At the synagogue’s annual Purim shpiel, he and Rabbi Joe will continue their tradition of making up showtunes about the Book of Esther.

“I’m not sure that a bi-coastal 72-year-old queer Jew is the right person for this job,” he acknowledged of the Congressional seat. He paused and smiled. “But I think maybe I am the right person.”

Correction: Due to an editing error, the original version of this article misstated the estimated Jewish population of West Virginia. It is about 2,300, according to the American Jewish Year Book, not about 1,200.