For over a year, Israel has jailed a Palestinian teen with a rare disease. There’s no trial in sight 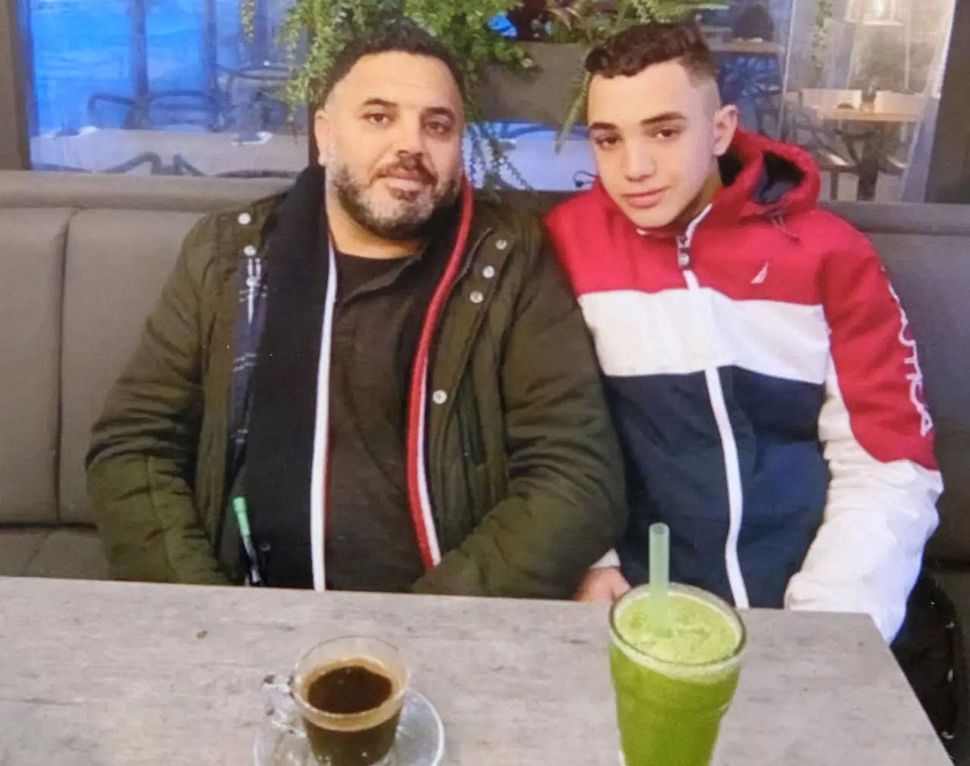 What do the Shin Bet security service and the Israel Defense Forces have against a teenager in high school, whose father says he doesn’t know the difference between ideology and biology, who suffers from a rare autoimmune disease and who in 2020 underwent surgery to remove a tumor from his chest? Why do they imprison him repeatedly, without trial, without an indictment, without any consideration for his age or his health?

No one knows what the suspicions are against Amal Nakhleh, who was in the 11th grade at the time of his first and second arrests, whose father is the director general of a broadcasting company in Ramallah and whose mother is a gynecologist in the Jalazun refugee camp, near that same city. Not does anyone know how long the teenager will remain in prison – apparently for stone throwing. Two Israeli military judges have already ordered his release after examining the security information in his case, but the larger predatory system has insisted on keeping him jailed, and to that end, has issued an administrative detention order – incarceration without trial; arbitrary and unconstitutional – that is renewed every few months. That has happened several times so far, and the end is not necessarily looming on the horizon.

As if his disease and the operation he underwent weren’t enough, last week Nakhleh also fell ill with COVID-19 and was taken to the hospital in Ramle Prison. He can’t be vaccinated, because of his immunosuppressive disorder. He was returned to his cell earlier this week.

Amal will turn 18 next week. His current administrative detention is due to end in mid-May, though it might be extended again. His father, a Ramallah resident, is the head of the Wattan Media Network, which employs about 100 journalists. In the organization’s headquarters, high up in an office tower in the heart of the city, the staff was busy this week preparing a campaign supporting a one-state solution. In the past, the Israel Defense Forces raided the company’s offices and studios several times – most recently in 2012 – carrying off equipment that was never returned.

Muammar Nakhleh, 50, a journalist, lawyer and left-wing activist, has two children. Osama, now almost 19, was arrested for the first time at the age of 13 and spend two years of his life behind bars. Amal has now been incarcerated for a total of 14 months. Their parents are divorced, and the sons divide their time between their mother, Iman, in Jalazun, and their father, in Ramallah.

Amal was first arrested in November 2020, while he was on his way home from shopping in the new Palestinian city of Rawabi, north of Ramallah. He was held in custody for 40 days on suspicion of stone throwing, until military youth court judge Lt. Col. Sharon Keinan ordered his release on bail. The military prosecution appealed the decision, but meanwhile, on December, 10 another military court judge, Lt. Col. Yair Tirosh, dismissed the gravity of the classified evidence presented to him and also ordered Amal’s immediate release. On January 21, 2021, however, Amal was rearrested, with no explanation. A few days later, reserve military court judge Shimon Ashual approved the request – submitted by Col. Naama Rosen Grimberg, an intelligence officer in Central Command – to issue a six-month administrative detention order against Amal.

When Amal was 15, a benign tumor was discovered in his thymus gland, below the breastbone. A few months later, a Ramallah hospital recommended that he undergo surgery in Hadassah University Hospital in Jerusalem or in the city’s St. Joseph Hospital. His father was unable to obtain an entry permit to Israel for him, but Amal and his father succeeded in getting to the hospital by other means, and he underwent surgery there.

A few days after being released from the hospital Amal was arrested at the Atara checkpoint when leaving Rawabi. A few weeks after he was released, a Palestinian intelligence official called his father and told him to report to them urgently with his son. Muammar Nakhleh said he would produce his son the following day. Two hours later, Palestinian intelligence called again: “Where are you? Get here immediately. The Israelis are going to kidnap Amal.” Amal was then questioned by Palestinian investigators. He was asked about stone throwing at the Beit El settlement and about some of his Facebook posts, and was freed after an hour. That same night, Israeli troops arrested Amal at his mother’s home in Jalazun. Since January 21, 2021, he has been in prison.

Amal told his father that he was incarcerated because of his “biological thoughts.” Muammar says he meant his “ideological thoughts.” This week, in his Ramallah office, Muammar mentioned the confusion on his son’s part several times. “He is too childlike to be arrested for dangerous thoughts.”

Amal suffers from a rare autoimmune disease called myasthenia gravis, which affects the connections between muscles and nerves, and can sometimes affect muscles used for breathing and also the limbs. The disease is connected to the tumor in the thymus gland for which Amal had surgery. It’s a chronic, incurable disease, and he requires medicative treatment and constant monitoring.

Dr. Bettina Birmans, a neurologist at Shaare Zedek Medical Center in Jerusalem, examined Amal on June 14, 2021, in Ofer Prison, at the request of the family and the NGO Physicians for Human Rights. She reported that Amal complained of shortness of breath while walking, apparently due to his illness, and recommended an urgent CT scan, because, she wrote, “a considerable possibility exists that there is a malignant growth and precious time should not be wasted.” The scan was carried out on July 22, at Hadassah, and happily no evidence of tumor recurrence was found, as the radiologist, Prof. Dorit Shaham, wrote. According to Amal’s father, stressful situations are harmful to his son’s condition, and cause him to have trouble eating and breathing. His ocular muscles are also affected.

Joint List MKs Aida Touma-Sliman and Ofer Cassif tried to obtain Amal release, due to his condition, via Defense Minister Benny Gantz, and also attempted to ensure that he was receiving his medications. On September 22, 2021, Cassif sent a message to Gantz urging Amal’s release “in light of his medical condition and the danger to his health in conditions of incarceration.” To no avail. His parents worried that he’d contract the coronavirus since he is unvaccinated, and are concerned in general that the tumor will recur. When he indeed fell ill with the virus and was hospitalized in the Ramle Prison, MK Touma-Sliman inquired about his condition in the defense minister’s bureau, as Amal’s parents had no way to communicate with him; she was told he was in good condition. Amal, it bears noting, is still a minor, until next week.

There’s no way of knowing whether he will be released when his current, fourth term of administrative detention ends on May 18. Requests for his release by Palestinian and international human rights groups have also been rejected. “We are holding him for security reasons,” was the response they got. Every attempt to find out what security dangers justify such a lengthy, arbitrary detention, why this high-schooler is not being placed on trial if he is so dangerous, and what will become of these dangers when he is released one day – all these questions have gone unanswered. Indeed queries like those never get a response in cases of administrative detention, even when minors are involved.

The IDF Spokesperson’s Unit this week responded to Haaretz’s query on the subject as follows: “Amal Nakhleh was arrested by the security forces on suspicion of involvement in terrorist activity. After information was collected about him which showed involvement in military activities, dealings with weapons and participation in public terror activities, an order for his administrative detention was issued that was extended from time to time in light of his danger to the region’s security. The present detention order is valid until May 2022. All the orders, including the present one, were examined and authorized by the military court.

“In the deliberations relating to the judicial review of administrative detention, the court examines all the pertinent data in the matter, including every medical document presented to it, and weighs medical and other circumstances within the framework of its decision. We cannot comment on the data here, for reasons of personal privacy, and because the deliberations are held in camera.”

If the suspicions are indeed so grave, one must ask: Why has this young man not been put on trial?

Amal took his high-school matriculation exams in prison. He was supposed to enter university in the fall. At first, he wanted to study communications, but his father persuaded him to major in political science. “If you have something against him – tell us, tell his lawyer,” Muammar tells us. Iyad Hadad, a friend of the family and a field researcher for the Israeli human rights organization B’Tselem, adds, “Especially given his age and his medical condition.”

Amal – “hope” in Arabic – was so named when he was born preematurely, in the sixth month of pregnancy. The physicians told his parents that he wouldn’t survive but asked his father to give him a name nonetheless, for the death certificate they would issue. Muammar didn’t hesitate for a second, and named him Amal. Muammar, by the way, is named for Muammar Gadhafi, the former president of Libya; his brothers, too, have the names of Arab leaders.

Amal played on the Palestine children’s soccer team, and before his arrest was set to travel to South Korea with the team. His dream was to get to Barcelona; his hero is Lionel Messi. “His model is not his father or his mother, it’s Messi,” his father says.

Muammar admits that he is not optimistic about his son’s release in May, because when deciding on the last extension the authorities did not specify that it would be the last one. Last week the father was supposed to visit his son in prison, but the visit was canceled in the wake of Amal’s hospitalization with the coronavirus. During the year in which the young man has been imprisoned, Muammar has been permitted to visit him only twice.

On Sunday this week, Muammar met another youth from the Jalazun refugee camp who was incarcerated with Amal and was released. The teenager told him that Amal speaks to God and asks why he disappoints him time after time.

For over a year, Israel has jailed a Palestinian teen with a rare disease. There’s no trial in sight