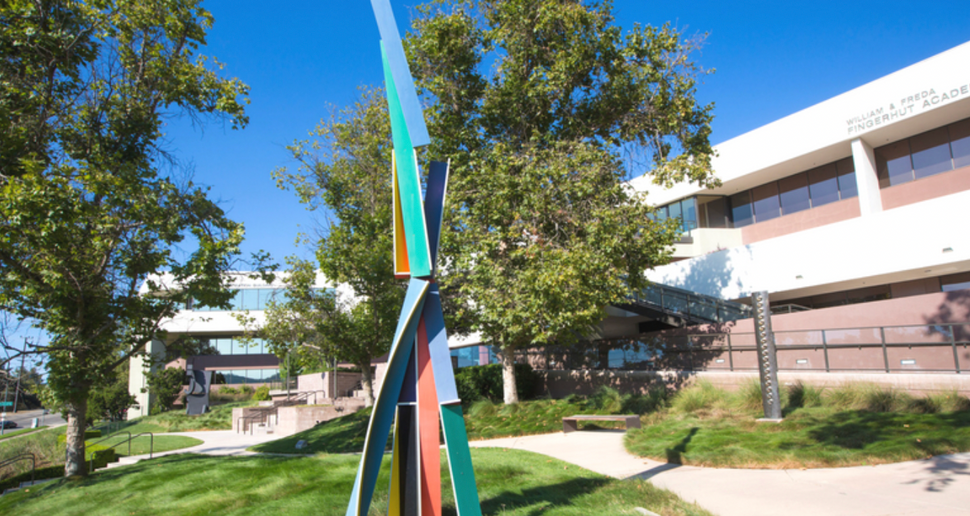 Sempere Fidelis” in the Sondra and Marvin Smalley Sculpture Garden at American Jewish University in Bel Air. Courtesy of AJU

When American Jewish University announced last week that it planned to sell its campus, there were, as you might imagine, more questions than answers.

How can a major Jewish institution put one of its greatest assets on the block overnight? Did the families who gave multimillion dollar gifts to expand and sustain the campus know the sale was in the works? Will the nonprofit university’s board sell to the highest bidder, regardless of how they plan to use the property? And what will become of a landmark that, while overseen by a single institution, has had such a major impact on the broader Jewish community?

That institution, founded as the University of Judaism in 1947, moved to the site in 1977. As it grewto include undergraduate, graduate, rabbinical and adult=learning programs, the campus added a 120,000-volume library, dormitories, auditorium, sanctuary and sculpture garden.

Its 22 acres  sits in L.A.’s pricey Bel Air neighborhood. Eastdil Secured, the commercial brokerage handling the sale, has not published an asking price.

Since AJU took over the 2,200-acre Brandeis-Bardin camp and campus in Simi Valley in 2007 — making it arguably the largest institutional Jewish landowner outside the State of Israel — it pursued a vision of Jewish education at all ages, but declining enrollment has led to the closure or scaling back of the Bel Air schools, and last year the university announced it was looking for a partner to share its space.

Then, last week, it announced the whole thing was for sale.

“Our mission statement doesn’t say anything about being a landowner in Bel Air,” Jeffrey Herbst, the university’s  president, said in an interview with Louis Keene, who is working on a story on the sale. “So I would argue what’s most important about the institution is staying exactly the same.”

Some of the people who have donated and raised the money to build AJU said that they understand the need to adapt and change. But they are hoping the assets created over the decades to further Jewish community and education can stay in the community.

Sondra Smalley, whose parents, Isadore and Sunny Familian, helped found the university with a major gift and raised millions of dollars to acquire the campus, described the sale – which she learned of only through news reports – as “a gut punch.”

“I’d like to see it remain Jewish,” said Smalley, who last year donated a $100,000 sculpture for the garden. “I know the name will change, my parent’s name will come off. I understand that. And it will be named after whoever gets it. But I hope it stays within the Jewish community.”

Leonard and Annette Shapiro, who in 2010 donated a sanctuary on the campus in memory of their son David, also want to see the property continue to serve the community.

“The most fantastic solution would be for it to remain a Jewish center on a Jewish mountain,” Annette said, referring to the fact that the AJU’s neighbors are Stephen Wise Temple, Milken Jewish Community High School and the Skirball Cultural Center.

One idea is for the Jewish Federation of Greater Los Angeles to sell its mid-city headquarters and move to the Bel Air campus, closer to the large Jewish population of the San Fernando Valley. The Federation could partner with nearby Jewish institutions, as well as the AJU, to make use of its sports fields and other facilities. 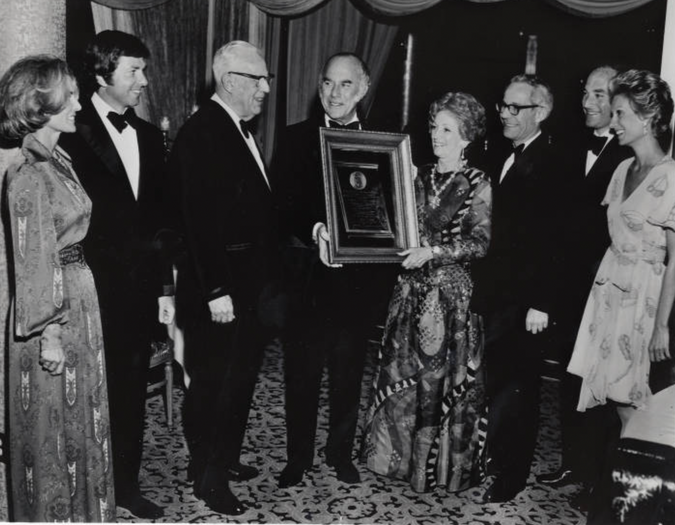 Isadore Familian receiving award, with Dr. David Lieber and Familian family, including daughter Sondra Smalley and her husband Marvin (on left) and son Gary Familian and his wife Liz (on right). Circa 1977. Courtesy of AJU

But Herbst said the university cannot commit to that idea – or any other. He told Keene that one possibility was that AJU would lease back part of the campus from a new owner, allowing the mikveh and library to remain in operation, but that he could also imagine leaving campus entirely. “We just don’t know yet how this is going to play out,” he said.

University officials have said they want to redistribute their assets from real estate to programming, especially online. Educational institutions around the world are scrambling to meet the growing demand for virtual classes. And for AJU, the  money to do it is right underfoot.

But AJU has a special footprint in L.A. that extends beyond its classes and students. And that’s the central question: What does the institution owe to the donors who helped create and sustain it, and the larger community it serves?

Michael Berenbaum, who runs an institute at AJU for Jewish ethics and leadership, said the university’s board “has a fiduciary duty to protect the institution” as well as “a moral responsibility to the Jewish community.”

A version of this column first appeared in the Forward’s weekly “Letter from California” from Rob Eshman. To receive the newsletter, sign up here.