26 miles West of Russia, Ukrainian Jews hunker down and wait 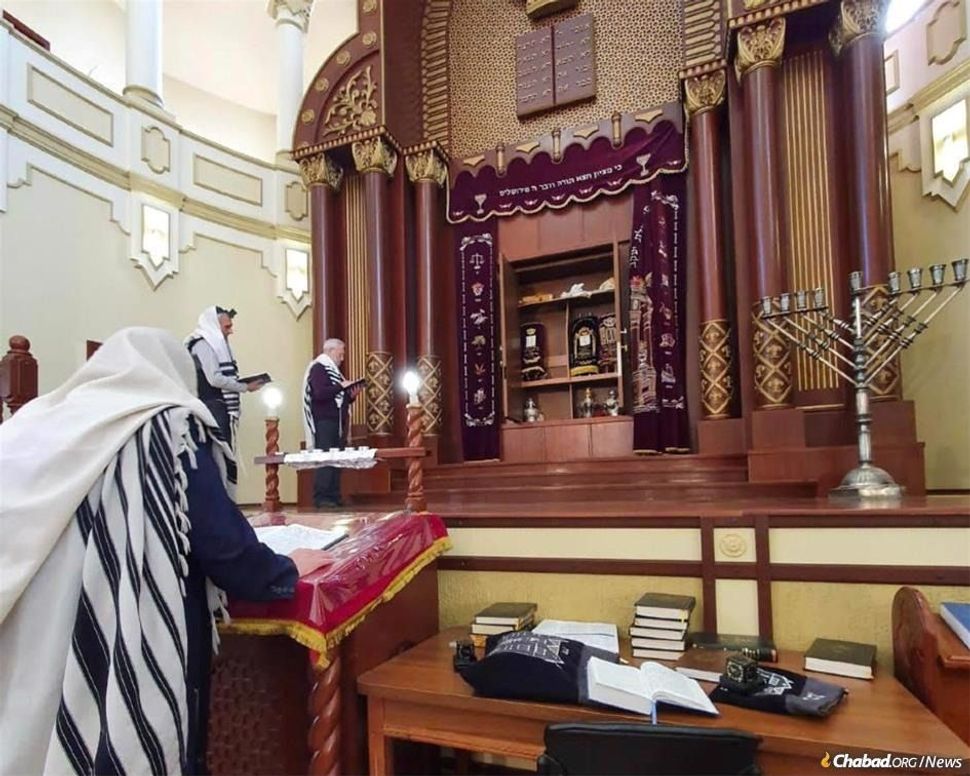 When Dovid Margolin spoke to the rebbetzin of Kharkov before Shabbat, he could hear heavy artillery fire in the background.

While he didn’t notice any panic in her voice, she quickly moved to make sure her family had started heading to the synagogue basement.

Kharkov, the second-largest city in Ukraine, is just 26 miles west of the Russian border. It is also home to 45,000 Ukrainians of Jewish ancestry and is under attack by Russian forces.

Ukrainian males ages 18-60 are banned from leaving the country under orders from President Volodymyr Zelenskyy. Many residents are preparing to fight or wondering whether they should attempt to flee. Jews in Ukraine are mostly hunkering down and preparing for whatever comes next.

Dovid Margolin, a senior editor at Chabad.org, has spent the last several days speaking with the 35 Chabad emissaries and 200 shluchim families currently living across Ukraine.

“The number one fear is that they will be caught up in the bombardment,” said Margolin. “Over the last 20 years, in both Russia and Ukraine, lots has changed for the Jewish people.”

Unlike during previous wars, “No one is expressing fear of being targeted specifically as Jews.”

Fifty to 60 families are currently sheltering in the fortress-like Kharkov Choral Synagogue, according to Margolin, to pray in community — and also out of lingering Soviet-era Jewish fears that they may be left behind or forgotten in the event of any evacuation.

Video of morning prayers in the Chabad Choral Synagogue showed the gathered singing… a prayer for an era of global peace, amid eerie whistling sound of artillery fire overhead.

By the time the Torah was read the mortar fire was even louder.

? on for the video ? pic.twitter.com/fzdMnqF8rx

The 22,250 square-foot synagogue, a center of Jewish life in the city, has been run by Chief Rabbi of Kharkov Moshe Moskowitz and his wife Miriam since 1990. They also operate a Jewish day school ten minutes north of the shul, where 400 students just celebrated the school’s 30th anniversary on Wednesday.

By the next day, they were all sheltering in place.

“To leave Ukraine is not a very practical option”

Because the orphanage is near a Ukrainian military base, all 150 children and staff have been evacuated to a remote campsite.

They left not because they were worried about being directly targeted, but due to their proximity to the military base — and for the children’s mental health.

“To leave Ukraine is not a very practical option at this point,” said Margolin. It takes about 19 hours to get from Kharkov to the western border with Poland. There has been massive traffic on the roads, and residents fear aerial bombardment.

In Odessa, a port city home to 45,000 Jews on the Black Sea in southern Ukraine, Rabbi Shlomo Baksht runs three orphanages for 250 children. He had wanted to move the children to safety in Western Ukraine, which experts had widely predicted would be spared from Russian attacks, but made the decision to shelter in places following Russian bombardments across the country.

Many children woke throughout the night to the sounds of artillery explosions, and many are profoundly anxious.

“We’re not going to move children from one place being bombed to another place that’s being bombed, that makes no sense at all,” said Rabbi Baksht.

26 miles West of Russia, Ukrainian Jews hunker down and wait