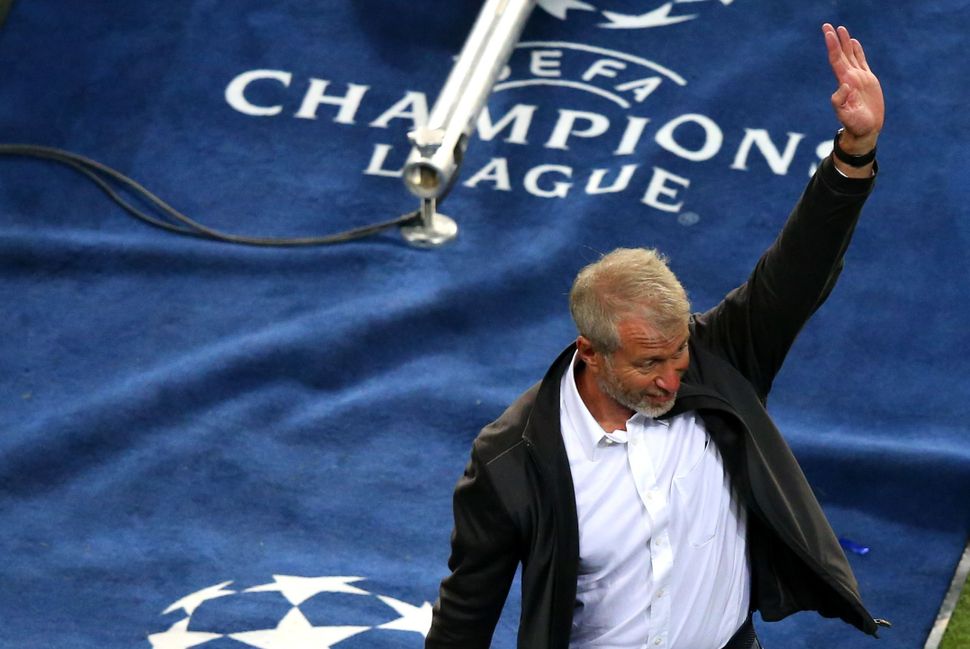 Roman Abramovich, owner of Chelsea FC, waves towards the fans after the UEFA Champions League Final on May 29, 2021 in Porto, Portugal. By Alex Livesey - Danehouse/Getty Images

A Jewish billionaire in Vladimir Putin’s inner circle who owns one of the most renowned soccer teams in the world agreed to help broker peace in Ukraine — and on Wednesday, announced he would sell the club.

Roman Abramovich, the Russian owner of the West London soccer team Chelsea, has become a global player not only in sports and commerce, but also in a geopolitical struggle that threatens to reconfigure the world order.

But as Abramovich, 55, mediates one conflict, he is the subject of another. The wave of economic sanctions against Russia following its invasion of Ukraine has targeted Russian oligarchs like Abramovich, an oil-and-aluminum magnate whose relationship with Putin dates back decades, and members of Britain’s Parliament have called for the seizure of his assets. Freezing them, European and American leaders hope, will raise the pressure on Putin to end the war.

This Russian power broker, however, is also an Israeli citizen and one of Israel’s most prominent philanthropists. There, Jewish leaders are rising to Abramovich’s defense. A letter signed by the head of Yad Vashem, the Ashkenazi chief rabbi of Israel and representatives from several other major Israeli charities and organizations asked American ambassador to Israel Tom Nides to refrain from targeting Israel’s second-wealthiest citizen.

The request, sent two weeks before the war began and reported by Israel’s Channel 12 news, comes as the Jewish world, with rare exceptions, rallies to the Ukrainian cause, its Jewish president and the tens of thousands of Jews who call it home. Stories of Jewish Ukrainians fleeing, sheltering, and enlisting have proliferated alongside footage of residential high rises devastated by rocket fire. On Monday, an Israeli citizen was reportedly killed in Kyiv by Russian shelling. A host of mainstream Jewish organizations are fundraising for or dispatching emergency aid.

Abramovich has taken pains to stay above the fray — first by stepping back from Chelsea, then by attempting to mediate, and now by selling the team. In a statement released through the club, he said he planned to direct the proceeds of the sale to victims of the war in Ukraine.

But while Israel, an American ally, cautiously condemned Russian aggression, the tug-of-war over Abramovich underscores its delicate position with regards to Ukraine. With some 170,000 Jews living in Russia — including a few of the country’s wealthiest individuals — Israel wants to avoid provoking Putin. And it likely wants to protect Abramovich, whose donations underwrite some of the country’s most cherished institutions. 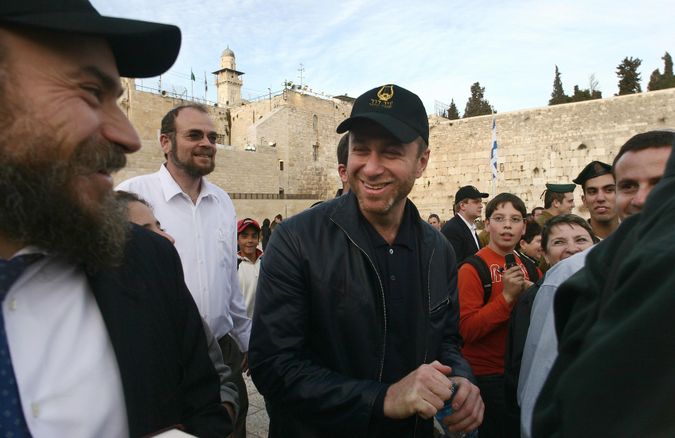 Abramovich at the Western Wall in 2006. Representatives for the Russian oil magnate say he has donated $500 million to various Israeli and Jewish causes over the past two decades. By Orel Cohen/AFP via Getty Images

A recipe for success — and influence

Since Roman Abramovich took over Chelsea F.C. in 2003, the team has transformed from a middling franchise into a trophy-hoarding juggernaut.

Abramovich quickly earned a reputation for spending lavishly on top players and cycling out managers like training equipment. His approach yielded few friends but brought — some would say bought — virtually unparalleled success in European soccer.

He had applied the same philosophy as a businessman: spend what it takes to win. He acquired a controlling interest in national oil production through billions of dollars in bribes to Russian officials — copping to it in a U.K. courtroom years later — and elbowed his way into aluminum by buying out his rivals.

While amassing his approximately $14 billion fortune, he developed a relationship with Vladimir Putin. In a lawsuit leveled against him by a former business partner, Abramovich was accused of acting as an enforcer for Putin who helped consolidate the oligarchy by threatening other businessmen with confiscation. A biography of Putin by British journalist Christopher Hutchins referred to Abramovich as “Putin’s favorite oligarch.”

Abramovich, whose was born in the southwestern city of Saratov and whose maternal grandparents were born in Ukraine, has downplayed his ties to Putin, with his lawyers telling the Guardian, “It would be ludicrous to suggest that our client has any responsibility or influence over the behavior of the Russian state.”

As Russia has drawn increasing ire from the west in recent years, Abramovich has attempted to hedge his bets by securing citizenship abroad. Shortly after Britain rejected his application in 2018, he became a citizen of Israel through its Law of Return. He acquired Portuguese citizenship in 2021 by claiming Sephardic heritage, though his application is now reportedly being investigated.

Long before he made aliyah, Abramovich had poured millions into various Israeli causes. A 2018 article in Times of Israel pegged his total donations to Sheba Medical Center, a hospital near Tel Aviv, at $57 million; early in the pandemic, he funded construction of a new ICU there. In 2020, after BBC News Arabic revealed he had contributed $100 million to a Israeli settler group that operates in East Jerusalem, a spokesperson for Abramovich said he had donated $500 million in the past two decades “to support healthcare, science, education, and Jewish communities in Israel and around the world.” 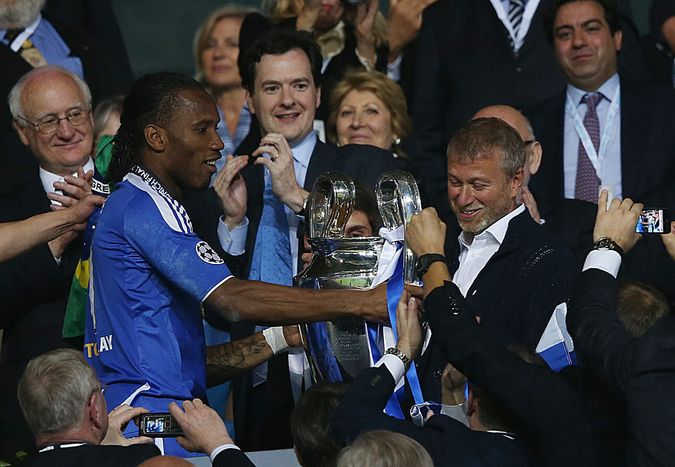 Chelsea striker Didier Drogba presents Roman Abramovich with the Champions League trophy in 2012. Since Abramovich over Chelsea in 2003, the club has won 18 trophies, tied for the most in Europe during that span. By Ian MacNicol/Getty Images

A conflict within a conflict

Earlier this month, as media outlets around the world reported that Russia was preparing to invade Ukraine, Britain foreign secretary Liz Truss said a list was being prepared of Russian oligarchs who would be targeted for economic sanctions if Putin started a war.

Though the list itself was not made public, the likelihood that Abramovich, as one of Russia’s most visible oligarchs, would be on it may have prompted Israeli leaders to write on his behalf.

Yad Vashem denounced the invasion of Ukraine. But it is also supporting Abramovich. In a letter to Nides dated Feb. 6 — two weeks before the invasion — Yad Vashem chairman Dani Dayan and Ashkenazi chief rabbi of Israel David Lau lauded Abramovich’s donations and said sanctioning him would be unfair and hurt Israel and the Jewish people. The head of Sheba also signed the letter.

On Feb.8 — two days after the date on the letter — Yad Vashem announced an “eight-digit donation” from Abramovich that would fund the museum’s International Institute for Holocaust Research for five years.

Abramovich was not included in the first round of sanctions — neither were several of the wealthiest Russians as ranked by Forbes — but calls for the seizure of his assets continued to grow as the crisis in Ukraine worsened.

On Feb. 24, British Labour MP Chris Bryant said government documents had identified Abramovich’s direct ties to Putin and to “corrupt activity,” and called for the freezing of his assets.

Two days later, Abramovich announced that he would be transferring stewardship of Chelsea to the trustees of its foundation, saying, “I believe that they are in the best position to look after the interests of the Club, players, staff, and fans.” But he retained ownership of the team and will continue to sign the checks.

The statement, and a separate one issued by the club the next day, were received poorly in Parliament and the British media.

“Unless and until he condemns the criminal invasion of Ukraine I will continue to call for the UK to sanction him and seize/freeze his assets,” Bryant wrote on Twitter in response.

Robbie Earle, an NBC soccer commentator, said the club’s statement, which did not mention Russia or Abramovich, was “an embarrassment.” 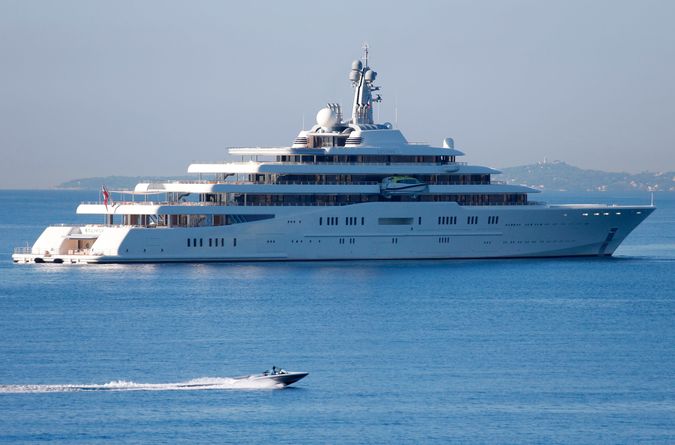 The yacht of Russian billionaire Roman Abramovitch, the Eclipse, is seen moored in the French riviera in 2013. The Eclipse is the world’s-second largest private yacht. By Valery Hache/AFP via Getty Images

A fortune in the balance

If Abramovich’s efforts to stave off sanctions are wearing thin, proving his value in a potential cease-fire could keep the soccer club in his possession a while longer.

According to the British publication the Jewish News, which first reported Abramovich’s involvement, Ukraine contacted him through his Jewish contacts in the country, including Ukrainian-Russian film producer Alexander Rodnyansky.

Little is known about the extent of the diplomatic efforts beyond their location at Ukraine’s border with Belarus. Rodnyansky told the Jewish News Abramovich was using whatever ability he had to advance negotiations.

“Although Mr. Abramovich’s influence is limited, he is the only one who responded and taken it upon himself to try,” Rodnyansky said. “If this will have an impact or not, I don’t know, but I am in contact with [Ukrainian President Volodymyr] Zelenskyy’s staff myself, and know that they are grateful for his genuine efforts.”

And with world soccer taking action against Russia — FIFA suspended the country from World Cup qualification Monday — many will continue to point to one of its most famous owners as a domino that must fall before Putin reassesses his attack on Ukraine.

In addition to Chelsea, now valued at more than $2 billion, Abramovich’s assets include 450- and 500-foot yachts, a mansion in London worth well over $100 million and an air fleet that includes a 787 Dreamliner.

“Surely Mr. Abramovich should no longer be able to own a football club in this country,” Bryant said in Parliament. “Surely we should be looking at seizing some of his assets, including his 150 million pound home.”

An earlier version of this story misstated the number of Jews living in Russia. There were about 179,000 Jews as of 2017, according to a survey by the Jewish Data Bank.