Meet Israel Sabag, the man finding shelter for Ukrainian refugees in Romania — and their pets 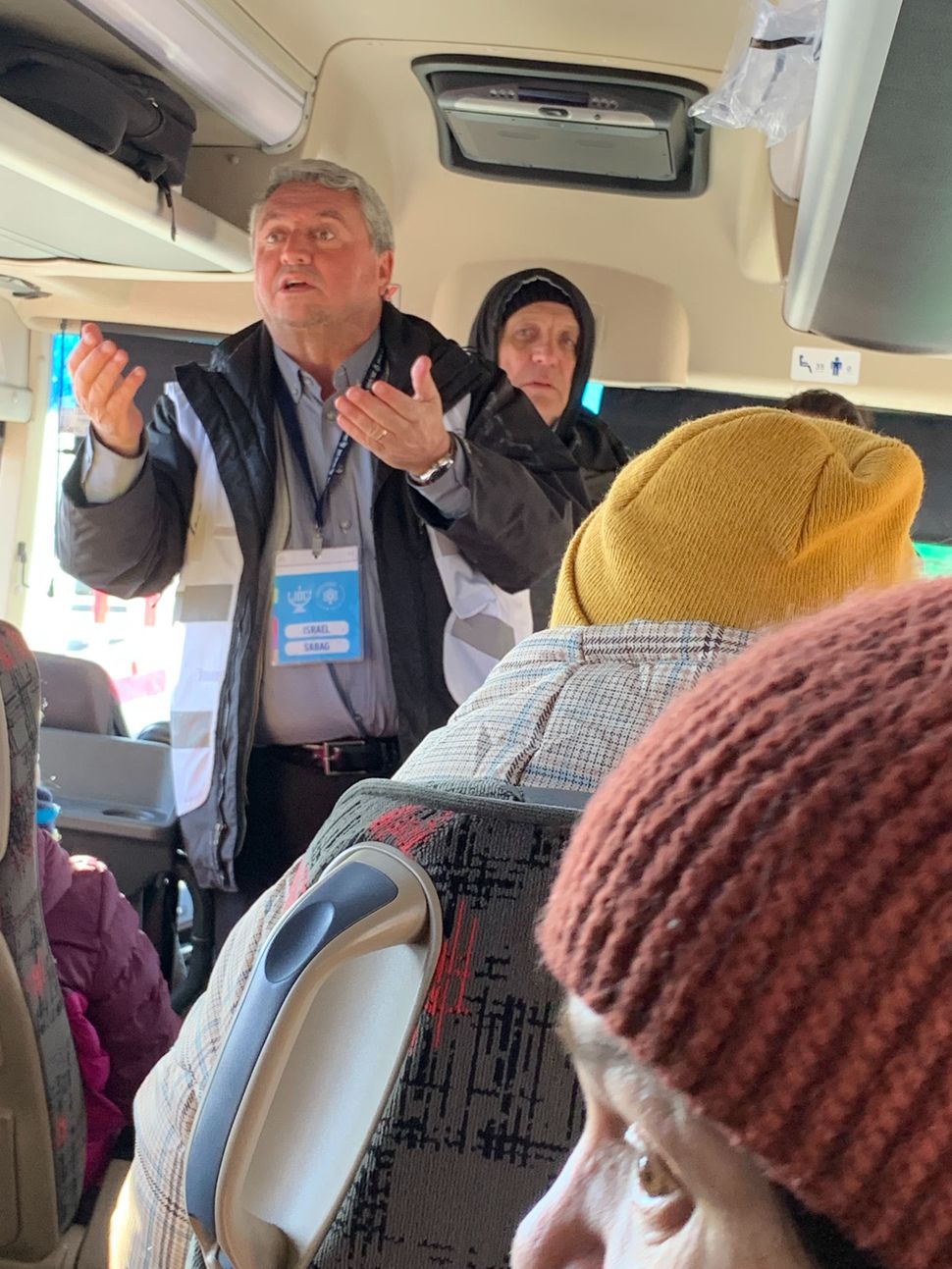 A busload of Ukrainian refugees, including two dogs and a cat, refused to take shelter at places that do not allow pets.

Israel Sabag was facing a rebellion from the busload of 30 refugees who arrived unexpectedly at the Joint Distribution Committee’s tent here on Ukraine’s border with Romania Friday morning.

Sabag, the Joint’s director for Romania, had been working for weeks with local hotels and hostels to prepare for the flood of people that had been pouring over the border since Russia’s invasion. He was ready for anything.

Except for a sad-eyed Lab, an elderly Pekinese, a 5-year-old gray cat and their respective owners. 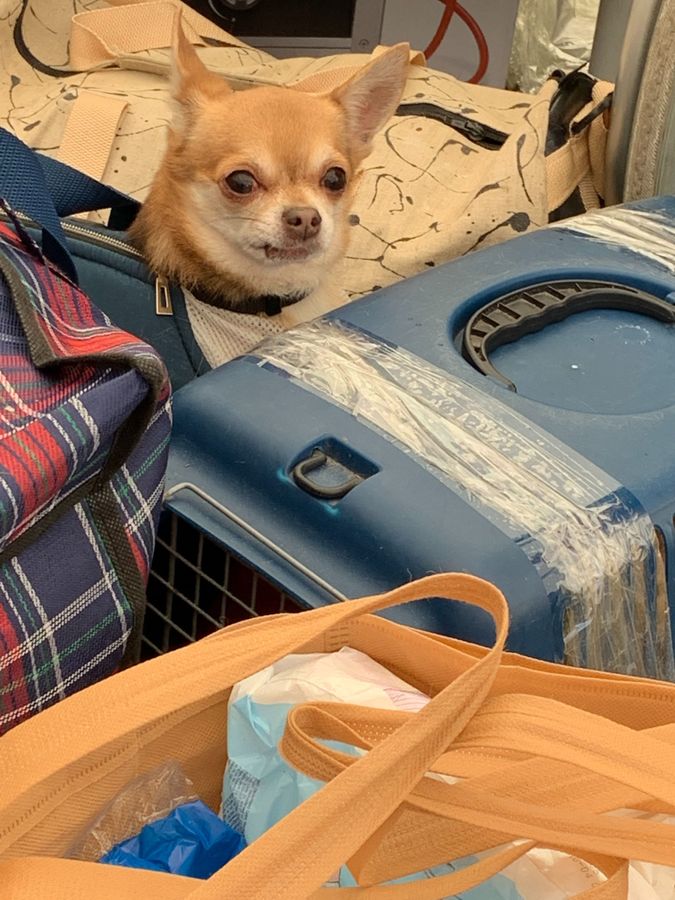 A Pekinese among the luggage brought by a busload of Ukrainian refugees that arrived in the Romanian border town of Siret on Friday morning. By Larry Cohler-Esses

None of the places Sabag had set up to take in refugees would allow animals on their premises. And despite their urgent circumstances, the pet owners refused to part with their pets. In fact, even the non-pet people were refusing the no-pet accommodations.

“They were just thrown together on the bus – none of these families knew each other,,” Sabag said. After hours together traveling through war zones, he explained, “they stood in solidarity with the pet owners.”

He kind of admired the resilience. And, as the refugees milled about the tent, Sabag had an idea.

There was a children’s summer camp in a town not too far away that was owned by the Jewish Agency. After a few phone calls, the Ukrainians headed off to sleep there, dogs and cat in tow.

Sabag, who is 53 and has worked for the Joint for three decades, has always “showed a spirit of flexibility and an ability to overcome obstacles and think outside the box,” said Amir Shaviv, the organization’s assistant executive vice president for special operations, who is a big fan. 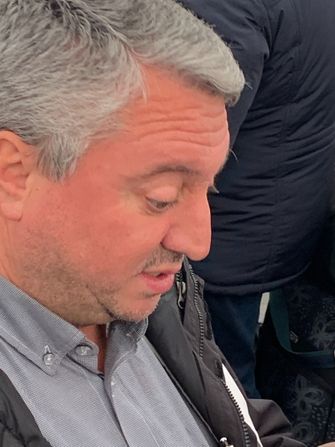 Founded in 1914, the Joint Distribution Committee – generally known as the Joint or JDC – is the world’s largest Jewish humanitarian organization, with operations in 70 countries, including many remote and impoverished places. It is a leader in the Jewish effort to support Ukrainian refugees, operating welcome tents in numerous countries along Ukraine’s border and coordinating with other groups to help people make aliyah to Israel or find other longer-term places to stay.

Sabag is the director of the Joint’s programs in Romania, the countries of the former Yugoslavia, the Czech Republic, Slovakia and Morocco.

The last, he admits, sounds like the thing that doesn’t belong with the others from Sesame Street. But Sabag was born in Morroco and grew up speaking a Moroccan dialect of Arabic at home, so it’s a natural fit for him, if not for the region.

Sabag was 3 when his family moved to Israel in 1972. He grew up in the port town of Ashdod, and served in a special unit of the Israel Defense Forces that split its time between Talmud study and military duties. While there, Sabag volunteered for a program in which he taught young people from the Orthodox B’nai Akiva youth movement.

One Hanukkah, he recalled, when strapped for resources for holiday celebrations for his students, a friend suggested Sabag seek help from the Joint. Soon after, they offered him a job teaching rudimentary Hebrew to Jews in Russia who were only recently freed from the limitations on such learning during the Soviet Communist era. 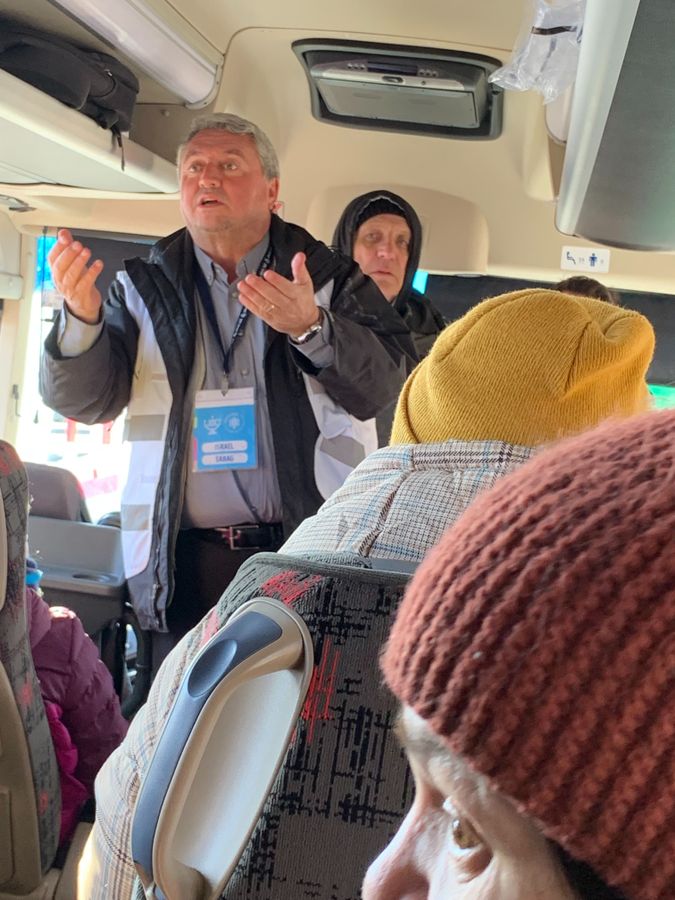 A busload of Ukrainian refugees, including two dogs and a cat, refused to take shelter at places that do not allow pets.

“The goal was to teach the Russian students 100 Hebrew words,” he recalled. “And I was the best teacher there because I didn’t know one word of Russian. The students were forced to talk only Hebrew in class due to my ignorance.”

Today, Sabag speaks Russian fluently, along with English, Romanian, Arabic and, of course, Hebrew. Before the pandemic broke out, he would typically spent as many as 200 days a year away from his home in Israel, traveling to run the JDC programs in eight countries.

“We call him ‘Mr. Push,’” said Albert Lozneanu, director of the Jewish Community Center in Iasi, the Romanian town that is home to the historic Great Synagogue, built in 1671. “He has incredible listening skills,” Louzneanu added. “I call him to ask for professional advice and, of course, financial help.” It was Sabag, Lozneanu said, who encouraged him to run to be secretary general of the Jewish community.

Sabag is married to a woman he met while working for the Joint in Russia, and they have three children – a 16-year-old daughter, and boy-girl twins who are 10.

“I think they got used to me not being a much of a presence in their lives,” he said of the kids, speaking in a subdued voice for the first time all day. “But I think they learned other things. It made them a bit tougher.”

Now, of course, he is on the move again. He arrived in Bucharest two weeks ago and has been working nonstop to establish 24-hour hotlines to field calls from around the world. He has been staying in a small hotel in Radauti, about 15 miles from the border operations in Siret, sleeping two or three hours a night.

“We talk about how all Jews are responsible for one another,” he said. “We have the privilege of actually hugging them when they’re in need.”

Meet Israel Sabag, the man finding shelter for Ukrainian refugees in Romania — and their pets