56 suitcases and a ticket to Warsaw: One woman’s Ukraine relief effort 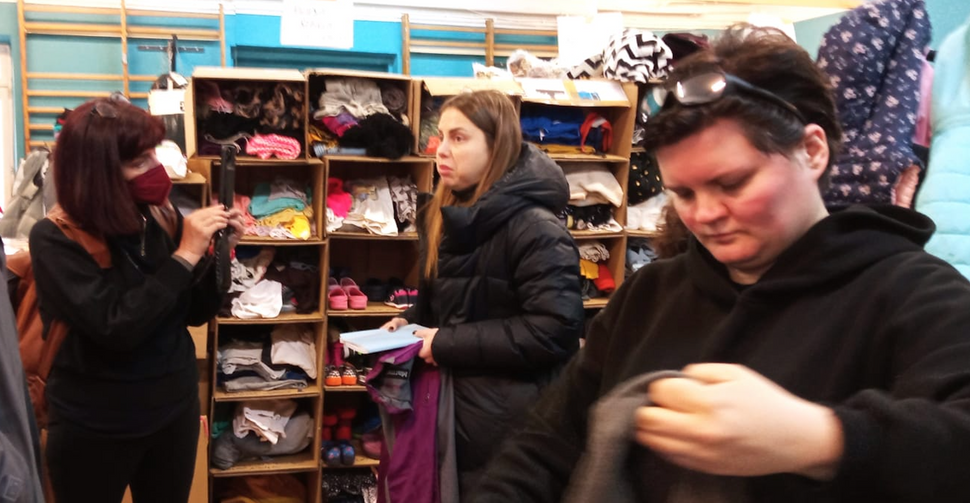 Barbara Cook (left) speaks with a Ukrainian refugee while delivering clothes from the Bay Area. Courtesy of Beit Polska

Barbara Cook was watching the horror in Ukraine unfold on TV and feeling helpless when she stood up, turned off the television, and started packing her bags.

Fifty-six bags, to be precise.

Cook, an entrepreneur who lives in the East Bay and the daughter of Holocaust survivors, started gathered donations of clothing, toiletries and suitcases from her network of friends and colleagues last Friday and by Wednesday was at a synagogue in Warsaw, distributing much-needed clothing to people who are starting life from scratch. 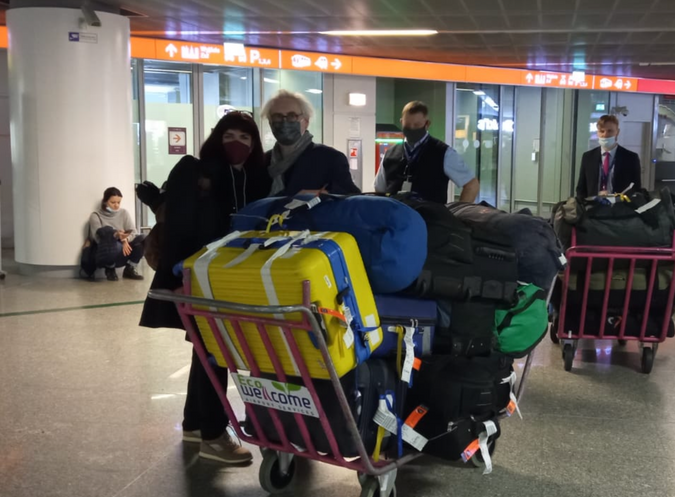 “It just ignited a need in people to do something, because they cannot bear what’s going on in Ukraine,” she said by phone from Warsaw, speaking of the response to the impromptu initiative she’s calling Suitcases of Love. “At least this way people feel they have done something for good.”

Cook made arrangements through the World Union of Progressive Judaism and the Warsaw-based Beit Polska, Rabbi Haim Dov Beliak, an L.A. rabbi who has long been involved in the revitalization of Polish Jewry, connected Cook to contacts in Poland.

“She is a child of survivors who was taught at an early age about human need for compassion,” Beliak said. “This is a dramatic way of expressing that connection.”

We all feel compassion — and frustration, and anger — about what’s happening to Ukrainians. Many of us channel it into donations to major organizations, which of course is critical.

But Cook’s quick, almost rash idea captures the urgency of the moment. A businessperson herself — her last venture was as CEO of a startup developing a pill to determine if a drink has been spiked with a “date rape” drug — she figured women starting from zero need fresh underwear, smart sweaters, blouses and knit pants — business attire — before they could even begin looking for work.

“I thought I’d get maybe 10 suitcases,” she said. “Then the floodgates opened.”

Cook packed 56 suitcases with toiletries, underwear and clothes suitable for job interviews in Polish weather . She decided to start by bringing 20, many of them decorated with blue-and-yellow stickers the color of Ukraine’s flag. As she drove to the airport with the luggage piled in the back of a pickup truck, other drivers honked and waved support.

“When we got to the COVID testing station, people got out of the way so I could go first,” she said. She is still working out a resolution of the excess baggage fees with United Airlines, which she said has been “gone out of its way to be supportive.” 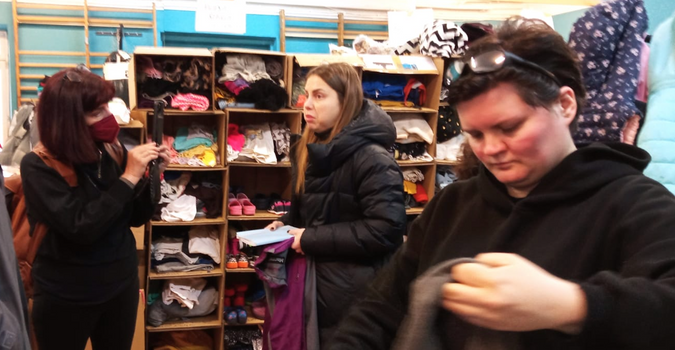 Barbara Cook (left) speaks with a Ukrainian refugee while delivering clothes from the Bay Area. Courtesy of Beit Polska

At a layover in Munich, Cook worried that her bags wouldn’t fit into the smaller aircraft to Warsaw. But when an airport worker saw the blue-and-yellow stickers, she said, they insisted: “I don’t care if the other bags get on, yours are going first.”

In Warsaw, the chief baggage handler told Cook the only people who arrived with so much luggage were oligarchs and movie stars.

When she showed a dubious customs official a letter from Beit Polska detailing what the bags were for, he patted her on the back and helped her through.

Since the war began, at least 1.8 million Ukrainian refugees have arrived in Poland, according to the United Nations — a number that matches the Warsaw’s pre-war population.

Members of Beit Polska met Cook at the airport and drove directly to Warsaw’s Nozyk Family Synagogue.Inside, Cook immediately met two Ukrainian women. The first, who has a master’s degree in human resources, said she wanted to find work but had no clothes to go out and meet employers — exactly the kinds of clothes Cook had brought.

“She didn’t know who I was or why I was there,” said Cook. “I just walked into the room and they were taking things. They were so grateful.”

The second woman, who works part-time for an international technology company, told Cook she had arrived in Poland four days earlier with nothing but her mother, grandmother and two cats.

“Her mother said it’s either we take the two cats, or we take other things,” Cook said. “The family decided to take the cats. They couldn’t bear to lose any more.”

Now, she also has what to wear for her job interviews.

Cook said on Wednesday that she planned to stay in Warsaw one more day to find out what else people need. One worker told her people want flip-flops because they have to take communal showers. Whatever it is, Cook told me, she plans to return to the Bay Area and find it. Whether she herself returns with the remaining suitcases, or sends friends, or finds a different way to deliver more necessities, she has no plans to stop.

“I’m not going to be shy to ask for help,” she said. “I need to be associated with good when it comes to Ukraine. I need to feel something positive about it.”

56 suitcases and a ticket to Warsaw: One woman’s Ukraine relief effort