The harassers are loud. The Women of the Wall choir aims to be louder. 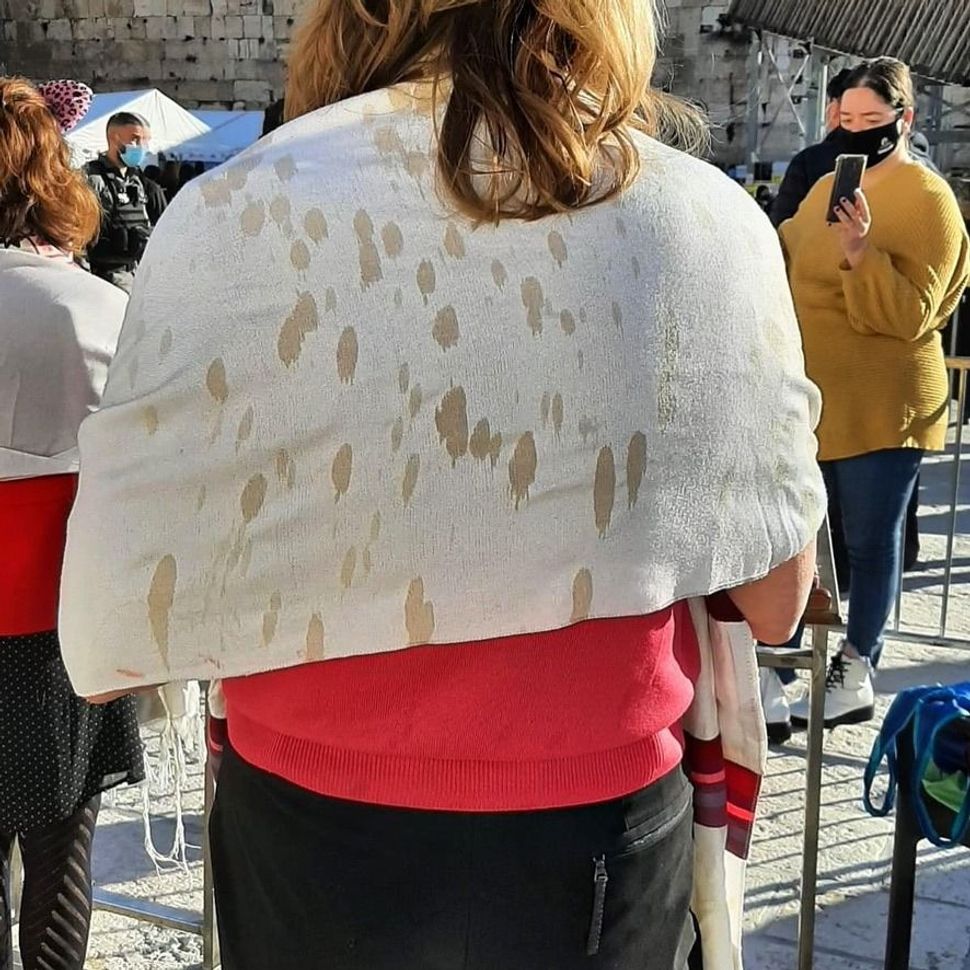 A protester threw hot coffee at Hoffman’s back while she was praying at the Western Wall. Courtesy of Deborah Katchko-Gray

A battle of acoustics is playing out at Jerusalem’s Western Wall, the holiest place in the world for Jews.

Traditionalists believe the Torah forbids women from singing in public — even at the Wall’s women’s section — and those who dare sing are often harassed.

“People come with hundreds of whistles to drown out our voices,” said Anat Hoffman, director of Women of the Wall, an Israel-based organization founded in 1988 that advocates for women to pray freely at the Kotel, as Israelis call it. “And there are women who scream and shout when we are praying, and there are men who shout ‘go to hell’ in English throughout our prayer.”

This spring, Hoffman is partnering with American cantor Deborah Katchko-Gray in hopes of drowning out the harassers. Loudspeakers are out of the question — it’s illegal for people other than rabbis to bring them to the Wall. They instead hope to amplify their voices by forming a choir — a loud one, with women positioned to best take advantage of the acoustics of the Wall, a remnant of the retaining wall of the ancient temple.

“Twenty women who know how to project, who are situated in the sweet spot, acoustically the sweetest spot in the whole basin,” will sing out together, Hoffman said. “I think we have a good chance of hearing them.”

A post shared by Women of the Wall (@womenofthewall)

Hoffman and Katchko-Gray didn’t know each other before last spring, when Katchko-Gray, the founder of a network of women cantors, saw a video of the rabbi at the Wall in which the back of her tallit — a prayer shawl that most Orthodox authorities ban women from wearing — was splattered with coffee stains.

“I was so shocked to think that somebody could be in prayer and literally be assaulted with hot coffee,” said Katchko-Gray, a fourth generation cantor at Shir Shalom, a congregation in Ridgefield, Connecticut.

The cantor, who has been handcrafting tallits for 20 years, decided to send one to Hoffman as a gift — one the color of coffee and made with stain-resistant material.

“It’s funny, and it shows solidarity and empathy,” Hoffman said of the present. 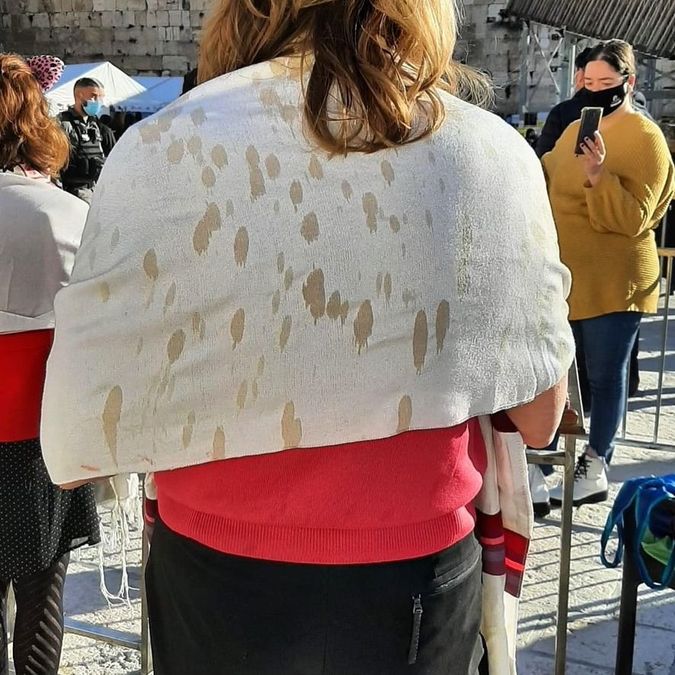 A protester threw hot coffee at Hoffman’s back while she was praying at the Western Wall. Courtesy of Deborah Katchko-Gray

After that, “we started a friendship,” Katchko-Gray said. Hoffman told her about how women struggle to hear each other when praying at the Wall and challenged her to form a choir to sing at the wall at an elevated volume.

Hoffman and Katchko-Gray are still trying to find enough singers to form their choir. It has not been easy.

“It has to be someone who believes in Women of the Wall,” Katchko-Gray said, “and is willing to be at the Kotel at 7 a.m. once a month and also be aware that right now, there is still some opposition — whistling, screaming, sometimes somebody throws something.”

They would like to have as many as 20 singers in the choir, but once they’ve got at least 10 to 12 people — which they hope will be the case later this spring — they aim to sing at the Wall every month on Rosh Chodesh, the celebration of the new moon. Rosh Chodesh has long been seen as a special day for women, partly for the connection drawn between the phases of the moon and women’s menstrual cycle.

Katchko-Gray says her organization, the Women Cantors’ Network, has set aside $10,000 of its budget — enough funding to support two years of Rosh Chodesh performances. They also hope to raise money to pay for the singers’ transportation and give them stipends, but haven’t yet.

Katchko-Gray recruited her friend, composer and producer Beth Styles, to arrange the music she wanted to go with the Rosh Chodesh prayers.

“I chose music that I felt could use some harmony and could use that extra power,” Katchko-Gray. Styles “did beautiful, simple, two-part choral arrangements of this music.”

In the three decades since its founding, Women of the Wall has had some legal victories. In 2019, women won the right to wear tefillin at the Wall. They’re also now permitted to pray out loud, but not to read from the Torah. The Israeli government still hopes to move forward with a plan approved in 2016 to establish a combined-gender section at the Wall for non-Orthodox Jews.

Once Women of the Wall begins its choir performances, it plans to livestream them on its Facebook and Instagram pages.

The harassers are loud. The Women of the Wall choir aims to be louder.