This article originally appeared on Haaretz.com. To get Haaretz’s Daily Brief newsletter delivered to your inbox, click here. 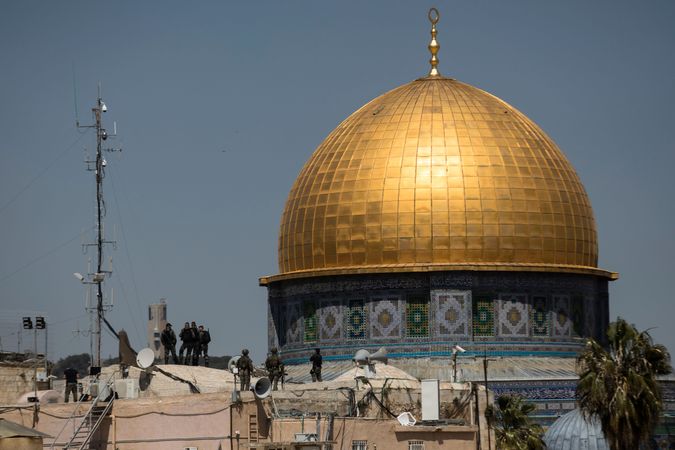 Israeli police stand on a rooftop near Al-Aqsa Mosque on Friday April 15, after a clash with Muslim worshippers that morning. By Amir Levy/Getty Images

At least 152 Palestinians and three Israeli police officers were injured in clashes Friday at Al Aqsa Mosque, the Muslim holy site that includes the Temple Mount, the worst skirmishing in Jerusalem since the Muslim holy month of Ramadan began on April 1.

The violence last for about six hours. Later, about 50,000 Muslims, half from the West Bank, arrived at the mosque compound for noon prayers.

In a rare move, Israeli officers entered Al-Aqsa Mosque itself early Friday morning after Palestinians threw stones at police forces from the entrance and barricaded themselves inside. The police say they carried out “hundreds” of arrests before reopening the compound for noon prayers for the second Friday of Ramadan. According to a senior official, the decision to enter the mosque to make the arrests was in part to enable prayers to occur at noon.

The Palestinian Red Crescent reported that eight of the more than 150 people injured by rubber bullets and tear gas were in intensive care. The police said that the three officers were lightly injured.

Thousands of Palestinian youths had stayed at Al-Aqsa overnight Thursday amid calls by extremist Jewish groups to enter the compound on Friday to perform a Passover sacrifice, in violation of agreements that bar Jewish religious practice at the site. The police said that about 40 buses brought the youths, many of whom hold Israeli citizenship, to the site from northern Israel.

Public Security Minister Omer Bar-Lev said Israel did not want the area to become “an epicenter of violence that will hurt both Muslim worshipers there and Jewish worshipers at the Western Wall.”

“We have said time and again that we will do the maximum to allow freedom of worship at the Temple Mount and that reality hasn’t changed,” he said. “The officers there are acting bravely in these complex circumstances, as they deal with violent people who gathered rocks and iron rods in order to hurt the freedom of worship on the mount and at the Western Wall,” he added.

Several Israeli and Palestinian groups condemned the entry of security forces into the mosque.

Hamas called it “barbaric aggression” and called “on the masses in the West Bank and within the Green Line to stand by our brothers in Jerusalem.” The Islamic Jihad echoed the sentiment, warning that unless Israel “lifted its aggressive hand from Al-Aqsa Mosque, confrontation will be sooner and stronger.”

Mansour Abbas, chairman of the United Arab List, the Islamic party in Israel’s coalition government, said: “The continued damage to Al-Aqsa Mosque is a red line for us.” Another UAL lawmaker, Mazen Ghanayim, sent Bennett a letter threatening to leave the coalition unless security forces stopped operating in Al-Aqsa.

“A government which behaves in this way has no right to exist,” Ghanayim said.

The Palestinian Presidency’s Office dubbed the actions of Israel Police as “a serious escalation and a declaration of war” and called for international intervention, while the official statement from the Palestinian Foreign Ministry took the events as proof that “Bennett’s government is lying about its intention to maintain the status quo at Al-Aqsa Mosque, and that the Israeli government strives to split the mosque and Judaize the city.”

The Jordanian Foreign Ministry, too, said that Israel “held full responsibility” for the incident, and called on Israeli security presence to withdraw from the mosque.

Earlier this week, Palestinian organizations slammed calls by right-wing activists urging Jews to come to the Temple Mount on Friday with a kid goat in order to perform the Passover sacrifice. On Friday, Israel Police detained two Jews who were on their way to ritually slaughter a kid goat.

Another man was detained at his home in Jerusalem on Thursday, while others who had published the calls were also detained. Meanwhile, the Waqf, the Muslim religious trust responsible for the compound, stopped two people they suspected of being Jews in disguise but turned out to be Muslim.

Since Thursday, 11 Jews have been arrested on suspicion of planning to sacrifice a goat on the Temple Mount. Three goats have been confiscated.

The IDF announced Thursday that a curfew will be imposed on Palestinians in the West Bank during the Passover holiday starting Friday at 4 p.m. until Sunday.

Palestinians are permitted to attend Friday prayers at Al-Aqsa but will have to return to the West Bank by the time the closure begins. The possibility of extending the lockdown throughout the week is still being discussed.