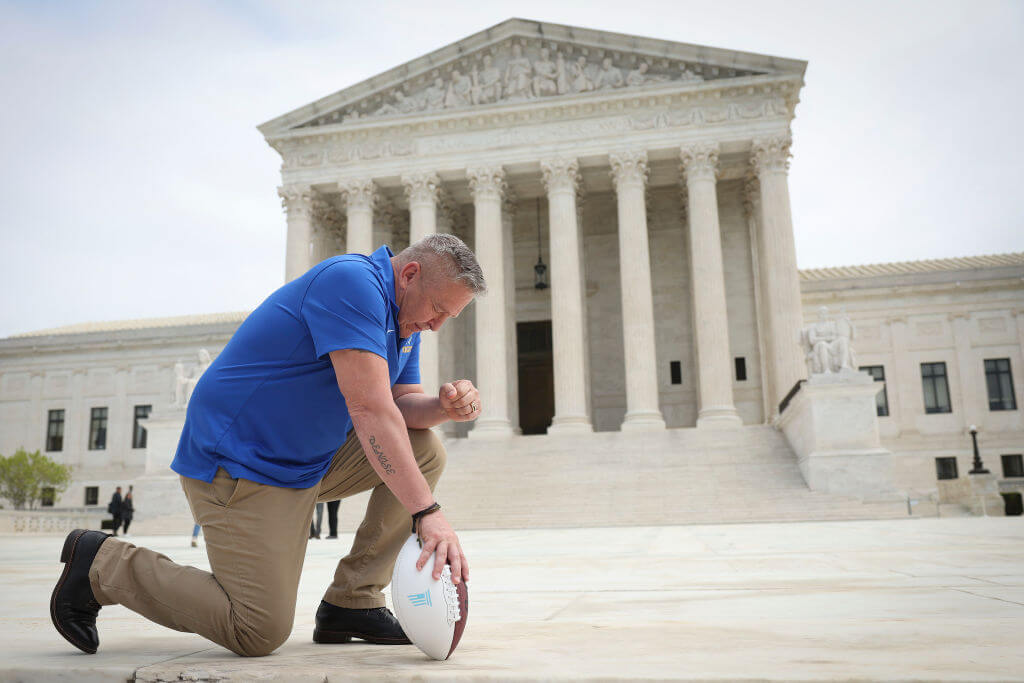 Prominent Jewish groups denounced the Supreme Court’s 6-3 ruling Monday in favor of a public high school football coach who prayed midfield after a game — and they worried about what the decision will mean for Jews and other religious minorities.

“This is a significant change in how we approach prayer in public schools, and one that will have a negative impact in particular on students of marginalized faiths and non-religious students,” said Rachel Robbins, the chairwoman of the Anti-Defamation League’s Civil Rights Committee. The ADL, which joined a friend-of-the-court brief on behalf of the school district, said it was “deeply disturbed” by the decision, Kennedy v. Bremerton.

“My worst fear is that you have young kids who are being coerced into engaging in religious activities in which they do not want to engage,” said David Barkey, the group’s national religious counsel.

The court determined that a Washington state school district that refused to renew a coach’s contract over his Christian prayer had trampled on two of his First Amendment rights — to free speech and the free exercise of religion. Major Jewish groups countered that the court had underestimated the harm his prayer inflicts on those who do not share the coach’s beliefs. The decision, they argued, undermined the Constitution’s Establishment Clause, which prohibits the government from sponsoring or favoring a religion.

And they predicted a new legal landscape in which it will be difficult to challenge religious practices in government-funded classrooms.

“The Court’s see-no-evil approach to the coach’s prayer will encourage those who seek to proselytize within the public schools to do so with the Court’s blessing,” the American Jewish Committee said in a statement.

In addition to the ADL, Jewish groups that signed on to a brief imploring the court to rule for the school district included the American Jewish Committee, the National Council of Jewish Women, B’nai B’rith International, the Jewish Council for Public Affairs, Hadassah and the Central Conference of American Rabbis. They were joined by groups representing other religious minorities, including the Hindu American Foundation, Muslims for Progressive Values, and some Christian groups.

After the ruling was announced, the Religious Action Center for Reform Judaism tweeted: “As Reform Jews, we believe no student should feel forced to engage in religious activity at public school or choose between religious freedom and being part of a team.”

We are deeply disappointed in SCOTUS' Kennedy v Bremerton decision permitting prayer in public schools. As Reform Jews, we believe no student should feel forced to engage in religious activity at public school or choose between religious freedom and being part of a team.

And the National Council of Jewish Women in a tweet echoed concerns that the decision would be especially damaging to children of minority faiths.

The Court is dismantling the wall between religion and state, and the impact on people — especially children, who practice a minority religion or no religion — cannot be overstated. #KennedyVBremerton #SCOTUS https://t.co/LOW8jTkqn4

Legal experts had expected the court to decide in the coach’s favor in the case, which received far less attention than another decided by the high court on Friday. In  Dobbs v. Jackson Women’s Health Organization the justices overturned a half-century of precedent and ruled that there is no constitutional right to an abortion.

Both cases should be understood as part of conservative hijacking of individual liberty, and one that is particularly harmful to Jews and other religious minorities, said Rachel Laser, president of  Americans United for Separation of Church and State and former deputy director of the Religious Action Center of Reform Judaism. She said it’s “an affront” to deny a Jewish person the right to decide whether to get an abortion based on her religious beliefs in the same way that it’s wrong to force taxpayers to support religious teachings different from their own in public schools.

“That’s a basic and core violation to the religious freedom of a Jewish person as I can think of,” Laser said.

A subset of American Jews supported the coach.

The Jewish Coalition for Religious Liberty filed a brief of its own, arguing that “for many Orthodox Jews, brief quiet prayer is a fact of every-day life, and may often have to be uttered in front of other people.” It warned against a ruling for the school district: “If this Court were to determine that the Establishment Clause compels public schools to prohibit employees from engaging in such conduct, it could effectively bar Orthodox Jews from teaching in public schools.”

And Agudath Israel of America, the haredi Orthodox group, praised the ruling after it was handed down.

Abba Cohen, its Washington director, said the group was pleased that the decision did away with a decades-old standard for assessing whether a government authority violated church-state standards.

Cohen clarified later that this did not mean his organization was praising the entire ruling. “Agudath Israel has long expressed concern about and opposition to denominational public prayer and the proselytization in schools,” he said.

The “Lemon test,” stemming from the 1971 Lemon v. Kurtzman decision, assesses whether a government action advances or inhibits religion. Orthodox groups have long said the test was overly restrictive.

“Rather than offering protection, ‘Lemon’ too often resulted in Establishment Clause hostility toward religion, which itself is constitutionally prohibited,” Cohen said. “The First Amendment is stronger with its demise.”

The Orthodox Union, the umbrella body for Modern Orthodox groups and synagogues, declined to comment on the decision.

And Rabbi Levi Shemtov, the executive vice president of American Friends of Lubavitch (Chabad), said he had mixed feelings about the ruling. Chabad has advocated for years for moments of silence in public schools, seeing them as a means for reflection and promoting more considered behavior.

But Shemtov said the coach’s Christian prayer was not quite the same. “A parochial prayer can present some real problems while a moment of silence is all but unassailable,” Shemtov said in an interview.  A moment of silence “gives each individual the right to worship in the privacy of their own mind even in the presence of others.”