Kippah under his helmet, this yeshiva grad is now a Texas A&M running back Sam Salz is believed to be the only Orthodox Jew currently on an NCAA Divsion I football team. Courtesy of Sam Salz

For the first time in October, Sam Salz, a 20-year-old sophomore from Philadelphia, suited up as a running back for the Texas A&M University Aggies, one of the most storied teams in college athletics.

On his back was the number 39, chosen in honor of the 39 types of work that are forbidden on Shabbat. Salz, who wears a kippah under his helmet, is believed to be the only Orthodox Jew now on an NCAA Division I football team. The Aggies play their games on Saturday, about half of them before sundown. Salz is committed to sit those out.

The economics major is a walk-on player — meaning he wasn’t recruited or given a scholarship to play. Making the team roster, he said, came after a year of solo training and a lot of prayer.

And, he told the Forward, thanks to some divine intervention. “God is always thinking a few steps ahead,” he said one day after classes at the College Station, Texas, campus.

Salz — all 5 feet 5 inches and 150 pounds of him —  has not yet actually played for the team, and, as the current season is over, is unlikely to do so soon this year. But he has hopes for next year’s season. And the symbolism of an Orthodox Jewish kid on a major college football team has not gone unnoticed.

“We are talking about a team that competes in the SEC, the most competitive college division,” said Oren Glickman, one-half of the team that produces The Ball Habatim, a podcast and YouTube show usually dedicated to Yeshiva University sports that recently had Salz on as a guest.

“To see someone who comes from a similar background walking on at a program like that,” Glickman continued, is “mind-boggling” and “inspiring to other aspiring players from the modern Orthodox world.”

And that, Salz said, is the point.

Alan Cannon, Texas A&M’s associate director of communications, said that while Salz is small for a football player, walk-on players are crucial, often standing in during practice for an opposing team and helping run plays.

“Walk-ons are very important to our program and [Salz] has shown that ability and it has been tremendous to have him on the roster,” Cannon said. 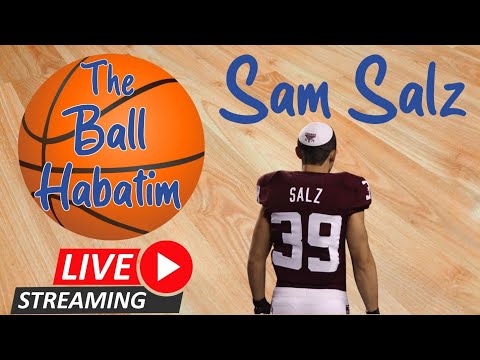 Salz grew up a fan of the Philadelphia Eagles and first dreamed of playing college football as a child. But at Kohelet Yeshiva High School northwest of Philadelphia, he played floor hockey, basketball, tennis and soccer. There was no football program, so his exposure to the sport was all through televised games.

“Football for me, there has always been something about it that I loved,” he said. “There was always something calling me inside my head that you have to play college football.”

When it came time to pick a school, his family drove the 1,500 miles from their home in Philadelphia to College Station. Salz was immediately smitten by Texas A&M’s “12th Man” football culture — every Aggie fan stands throughout all the games, symbolically ready to take the field should the team require it.

But it was a visit to the campus Rohr Chabad Jewish Center that cinched it. Salz felt at home in the tightknit, service-oriented place where campus Jews gathered to pray, share meals and volunteer.  “When I saw how special the Jewish community is here I said, ‘This is it. This is the place.’”

As a freshman, Salz had no clear path to making the team. Texas A&M, like all football powerhouse schools, cultivates and heavily recruits its future players while they are still in high school. And while walk-on slots are fairly common, they are very rare for a football newbie.

Still, Salz believed he could make it happen. He began training solo for two to five hours a day, taking his workouts from social media videos. He wrote an affirmation and put it in his pocket. It said, “I, Sam Salz, play football for the Texas Aggies.”

At first, he didn’t tell his family or his friends about his goal; then he told a few friends he trusted not to discourage him. And he kept training.

One day in fall 2021, he showed up at a local barbecue joint where head football coach Jimbo Fisher was doing a live radio show. At question time, Salz blurted out “How do I try out for a walk-on position,” and got a phone number.

He also got Fisher to sign his kippah — a white one embroidered with a menorah in Aggie maroon he got from the Rohr Center — and his affirmation paper.

More training and a few dollops of good luck later — coaches saw him training and called him in for a meeting — and he was on the team.

Last month, as the Aggies celebrated their Thanksgiving weekend victory over rival Louisiana State University, there was Salz, celebrating with his teammates, revealing that same Aggie kippah under his helmet.

His first game in uniform was on Yom Kippur. When he explained why he could not play, no one had a problem. Though he neither plays nor practices on Shabbat, he will use the players’ lounge on that day to study from a chumash and a volume of the Talmud he keeps in his locker. And for a Thanksgiving event, the team arranged a kosher meal.

In these times of heightened antisemitism, Salz says his teammates and his coaches have been nothing but open to learning about his Judaism and helping him to observe its laws. No one, he said, treats him differently as the only Orthodox Jew on the team roster.

“They all have a faith in God,” he said.

For Salz’s parents — his father is a chiropractor and his mother works for a Jewish relief agency —  their son’s spot on the team represents more than just hard work and determination. It challenges the presumption that Jews belong in the library or laboratory, but not on the playing field.

“To us, it is huge,” Marianna Salz, Sam’s mom, said. “There is definitely a level of stereotyping and I think my son wanted to show you can have what to some people might appear as two contrasting identities in one.”

“I think his dad said it best,” she continued. “He said, ‘They saw something in our son beyond his yarmulke. They see him as a human being.’”

Now that he has made the team, Salz has had to set other personal goals. One, he said, is to “do my best to help the team succeed.” Another is to play in the National Football League.

“I would like to see where my football career could take me,” he said. And if that doesn’t pan out? “Probably something in real estate.”

Salz is not the only observant Orthodox yeshiva boy to make it onto a big team.

Yeshiva University alum Ryan Turell was drafted by an affiliate team of the Detroit Pistons earlier this year, and Jacob Steinmetz, a graduate of a Long Island Jewish academy, is playing minor league baseball in the Arizona Diamondbacks organization.

David May was a placekicker for the University of Maryland football team from 2006 to 2009, and wrote about his teammates’ embrace of him and the times he confronted antisemitism in a piece for the Algemeiner.

Glickman says all of Orthodox Judaism is watching Turell, Steinmetz and Salz. “Just seeing these kids who are breaking barriers and not only are they experiencing very little antisemitism, they are being embraced,” he said. “It is just so beautiful.”

Kimberly Winston is an award-winning freelance reporter who has been covering religion for more than 25 years.

Kippah under his helmet, this yeshiva grad is now a Texas A&M running back