Peace Reigns In Meeting of Establishment Honcho and Orthodox Anarchist 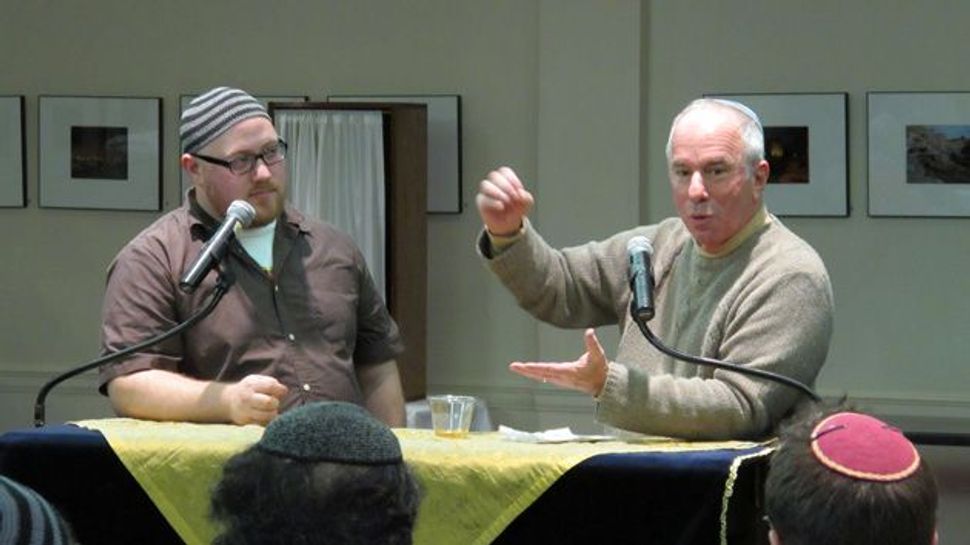 Debate: Dan Sieradski, a self-styled Orthodox anarchist, and John Ruskay, the CEO of UJA- Federation of New York, appeared in New York to discuss the state of the Jewish world. Image by gAl BECkERMAN

An event billed by some as a ?celebrity death match? between a representative of the Jewish establishment and a self-proclaimed Orthodox anarchist turned instead into a chummy all-male evening laced with schnapps.

The program, a ?dialogue? between John Ruskay, executive vice president and CEO of UJA-Federation of New York and Daniel Sieradski, who started the popular liberal blog Jewschool, took place December 19 in the basement of B?nai Jeshurun, the 150-year-old synagogue that has become the darling of the Manhattan?s Upper West Side intelligentsia.

Having been organized by its men?s havurah (fellowship), the evening had a clubhouse feeling. Most of those present wore sweaters, a table full of hard liquor ? including some quality Scotch ? sat at the back of the room and a snowstorm raged outside.

When it came to substance, though, for all the talk of generational clash and insiders vs. outsiders, there was surprisingly little friction between the two men.

In part this had to do with Ruskay, an unusual figure in Jewish life, having emerged from what could be called the Jewish counterculture of the 1960s and ?70s. He helped organize the havurah movement and was friendly with many of the young people who occupied Jewish federations in protest over their funding priorities ? including, he said pointedly, the federation he runs today. This history seemed to make him sympathetic to Sieradski, who defined his anarchism as ?nonhierarchicalism.? Ruskay said that young Jews should not wait for the ?system? to produce anything for them, they should do it themselves. He used the Vietnam protest movement to illustrate his point.

?If we would have waited for people to create the havurah movement or the Heschel schools, it would have never happened,? Ruskay said, referring also to the pluralistic Jewish day schools he helped found.

Sieradski?s complaint about the establishment ? and the crux of the criticism he lobbed at Ruskay ? was that the price of admission for having a say in Jewish life is now too high.

?The reins of power are in the hands of the few,? Sieradski said. ?And those are very wealthy people.?

He included UJA-Federation in this complaint, wondering if his voice would have any weight if he didn?t donate more than a few hundred dollars. He even referred to a particular example of sitting on the federation?s Web committee a few years ago and having his ideas ? which he said are now widely accepted ? ignored. Ruskay patted Sieradski?s arm and urged him to try again, saying that the federation was not a ?fortress? but that to be involved, one would need a ?willingness to get engaged, to drop your individual agenda at the door.?

They did have some other points of agreement, including what they both called the wrongheaded way that Israeli advocacy has been conducted in the community ? but this portion of the evening, Ruskay said, referring to the sensitivity of the subject and to the Scotch, was off the record.

The event ended with an exchange that may have best captured what was more a father-son conversation than one between insider and outsider.

Sieradski talked about the frustration he felt in trying to get the establishment to acknowledge the efforts he and his cohort were undertaking to make Jewish life attractive to his generation.

?We?re looking for your approval because this is what you?ve asked of us,? Sieradski said.

?Screw our approval,? Ruskay said. ?Create Jewish life that you think will work for you and your hevreh [friends]. Hopefully we?ll find ways to, at a minimum, not get in the way, and maybe we?ll even help you.?

Peace Reigns In Meeting of Establishment Honcho and Orthodox Anarchist