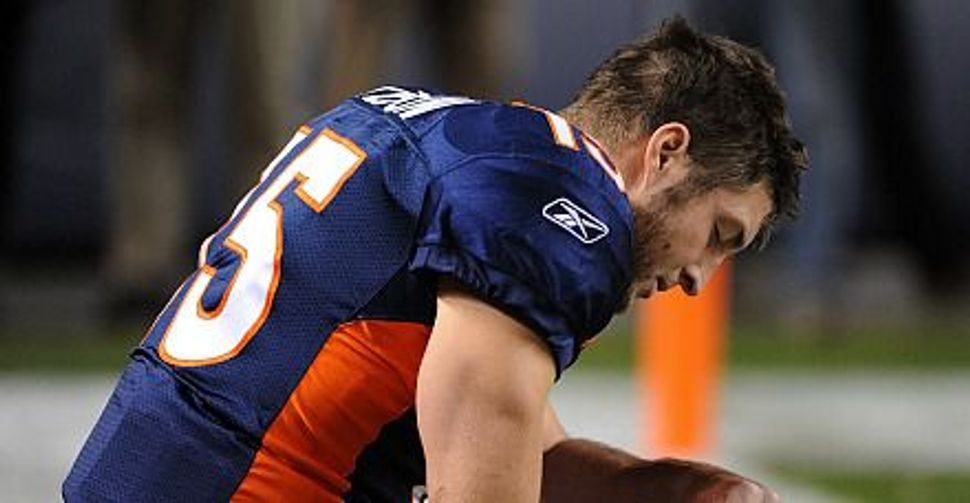 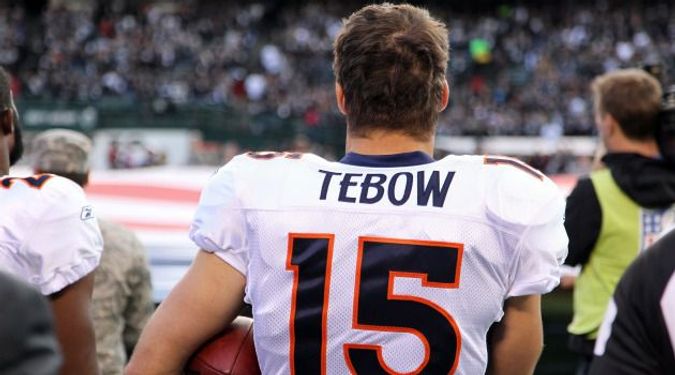 Praying for Points: Denver Broncos rookie quarterback Tim Tebow is burning up the National Football League. A devout Christian, he celebrates touchdowns by kneeling in prayer ? now even Jewish fans are joining in. Image by getty images

The biggest story in the NFL this season is Tim Tebow, a devout Christian quarterback who doesn’t throw very well but has helped the Denver Broncos pull off a string of last-second victories.

But the rugged Tebow’s signature move comes when play has stopped – taking a knee in prayer after scoring a touchdown. The pose has become a popular Internet meme, with fans “Tebowing” all over the world. That includes Jewish fans.

“In Denver, people see football as religion; Tebow unites people of all faiths,” said Jared Kleinstein, creator of the website Tebowing.com, in an interview with JTA.

Kleinstein, a Jewish Coloradan, created the site after watching Tebow’s TD celebration and being inspired to re-create the now iconic pose. Although some may think of it as nothing more than a sports-oriented version of planking, an analogous practice in which one lies face down in an odd place, Kleinstein believes that Tebowing is a physical manifestation of how football fans are inspired by the quarterback.

Tebowing, Kleinstein said, “is the prime example of someone not having any shame and inspiring people to be OK with whatever religion they follow.”

Tebowing has become a popular way for young fans to express pride in their beloved hero. Kleinstein says he receives an average of 10,000 pictures per day of people Tebowing and has to sift through piles to find the exceptional ones. While many of the pictures are silly, such as Tebowing in the office or in front of the U.S. Capitol, many have inspired others.

“Tebowing.com is 100 percent pride,” Kleinstein says proudly. “If you’re Jewish and you see this, I think you can be inspired to be as open about your religion as he is.”

During a recent trip to Israel, the 10th-grade class at Denver’s Jewish Day School – Kleinstein’s alma mater, incidentally – was photographed Tebowing in front of the Western Wall.

“They knew that their Tebowing would identify them as being from Denver,” said Sara Caine Kornfeld, a teacher at the school. Tebowing, she said, is “clearly a source of pride.”

Indeed, the Colorado Jewish community has warmed to Tebow despite their difference in religious beliefs.

Rabbi Marc Gitler of the East Denver Orthodox Synagogue described the 24-year-old quarterback as a source of pride for anyone who could be mocked for their devotion.

“Even from people who are very [religious Jews], they are happy to just have a guy who is religious and a good role model,” he said.

“I think it’s a great story, a person who was doubted and showed that he can win games in this miraculous fashion. It’s great for this country and great for this religious, moral human being.”

As a Heisman Trophy winner and first round draft choice, the Broncos and their fans had high hopes for Tim Tebow when he entered the National Football League last season. But his sloppy form and poor statistics cast doubt on the University of Florida graduate. Tebow saw little action, and many assumed his quarterbacking career would be short-lived.

But after the Broncos started the 2011 season with a 1-4 record, new coach John Fox benched Kyle Orton halfway through a game against the San Diego Chargers. Tebow, for better or for worse, now was the starting quarterback.

Not surprisingly, Tebow has come up short statistically. His completion rate of 48.5 percent this season is well below par for an NFL starter, and he has only 1,290 passing yards. In comparison, the Green Bay Packers’ Aaron Rodgers, arguably the best quarterback in the league, has a nearly 70 percent completion rate with 4,125 yards.

Yet Tebow in his second season has seen an astronomical rise to fame based on his late-game heroics. Led by their lefthander, as well as a solid defense, the Broncos have won seven of their last eight games with Tebow as a starter – some of the victories can only be described as miraculous – to vault into first place in the American Football Conference’s Western Division.

Add in Tebow’s wholesome persona and some fans and commentators are left wondering what role faith has had in his unlikely success.

“He isn’t the football player who says ‘I love Jesus’ and then is found with a stripper the next day,” Gitler said. “He presumably isn’t just paying lip service to his beliefs but actually does what he says he does, and that is front and center.”

Tebow’s public displays of faith are not ecumenical – he is unabashed in stressing his faith in Jesus. But that hasn’t turned off Jewish fans, said Rabbi Hillel Goldberg, executive editor of the Intermountain Jewish News.

Though admittedly ambivalent about football, Goldberg says he recognizes that Tebow has infused a different spirit into the city.

“In Denver, the Broncos are a religion. And in recent years the religion has failed, the Broncos have played poorly – the city has been football-starved,” he said. “Whoever and whatever revived the football fortunes – the religion – has been appreciated by all.”