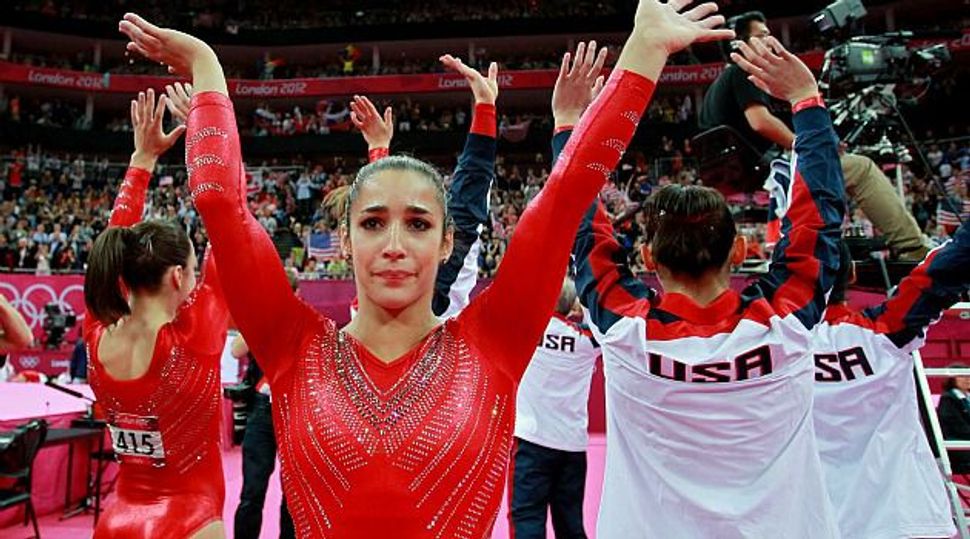 Gold! Alexandra Raisman celebrates the U.S. women?s team?s victory in the Olympics. She goes for individual gold on Thursday. Image by getty images

Two days after an inconsolable Wieber fled the North Greenwich Arena in tears having missed out on a spot in the all-around final, her smile was back as she and her team mates gave the U.S. their first Olympic team title since 1996.

Russia’s quintet had been snapping at the Americans’ heels throughout the competition but were left sobbing after they imploded on their final apparatus, the floor.

Ksenia Afanaseva completed her floor routine on her head and knees, summing up their miserable finish as they ended with 178.530.

Romania, champions in 2004, rallied from a poor start to claim bronze but 2008 gold medallists China were empty-handed in fourth after a succession of errors.

Wieber had come to London as the favourite to win the Olympic all-around gold to go with the world title she took last October.

Though she finished fourth in all-around qualifying, she was behind compatriots Aly Raisman and Douglas and the rules dictate that no country can have more than two gymnasts in Thursday’s individual final.

The 17-year-old Wieber came back fighting on Tuesday, opening the day’s proceedings with a confident vault. The apparatus, which traditionally produces high scores, gave the Americans a head start on their rivals.

Vault specialist and world champion McKayla Maroney danced off the podium with delight into the waiting arms of her coach, knowing she had landed a superb jump and the team went into the second rotation 1.733 points ahead of China and never relinquished the lead.

Russia overtook the Chinese and closed the gap at the top to 0.399 halfway through the four rotations but dropped back after Victoria Komova, the top all-around qualifier here, came off the landing mat on the beam and Aliya Mustafina nearly fell off the apparatus.

The floor wiped out all Russian hope of gold when a stumbling Anastasia Grishina picked up a low score of 12.466 and Afanaseva missed her final landing.

By the time Raisman took to the floor, where she won bronze at the last world championships, as the final performer of the evening, all the Russian gymnasts were in tears as they watched.

A confident routine delivered, Raisman joined her team mates and the five stood holding hands and gazing up at the giant results screen.

A score of 15.300 flashed up to confirm the magnitude of their win and American fans in the arena erupted into cheers.

“It’s an incredible feeling; just in this moment you realise every single effort and every single sacrifice and so-called suffering through the years with the ups and downs it was worth it,” U.S. team co-ordinator Marta Karolyi told reporters.

Wieber, who glowed with satisfaction through a dynamic floor routine, said she had been determined to get over Sunday’s qualifying setback.

“I was pretty disappointed but I knew I had to pull it together mentally for this team and I knew that getting this gold medal was a goal of mine so I really had to pull myself together and move on,” she told reporters.

Douglas added: “After Jordyn went (on the floor), I went: “Yes, we have this in the bag, we have it”. I was so confident I knew it right then and there. Even in training I had a feeling like we are the best in the world. I’m not being cocky or anything but I just had that feeling.”

China had problems on the beam, where 2009 world champion Deng Linlin fell off and Huang Qiushuang doubled over as she fought to keep her balance, scoring only 13.800.

Huang’s woes continued on the floor when she skidded from the landing on her first pass, overstepping the boundary and incurring a 0.3-point penalty.

Romania’s bronze owed much to the return of Catalina Ponor, a triple gold-medallist from the 2004 Athens Games, at the age of 24 after an eight-year Olympic break from the sport.

Ponor, looking unfeasibly tall at 1.60 metres in a line-up that includes the 1.40-metre Diana Laura Bulimar, collected the competition’s highest score on the beam, 15.416, and also had 15.100 on the vault.

Home team Britain had no ambition of repeating the feat of their male gymnasts who took bronze on Monday but former world champion Beth Tweddle, the mother hen of the team at 27 and appearing in her final Games, had the satisfaction of the day’s highest mark in the asymmetric bars, boding well for next Monday’s individual final.