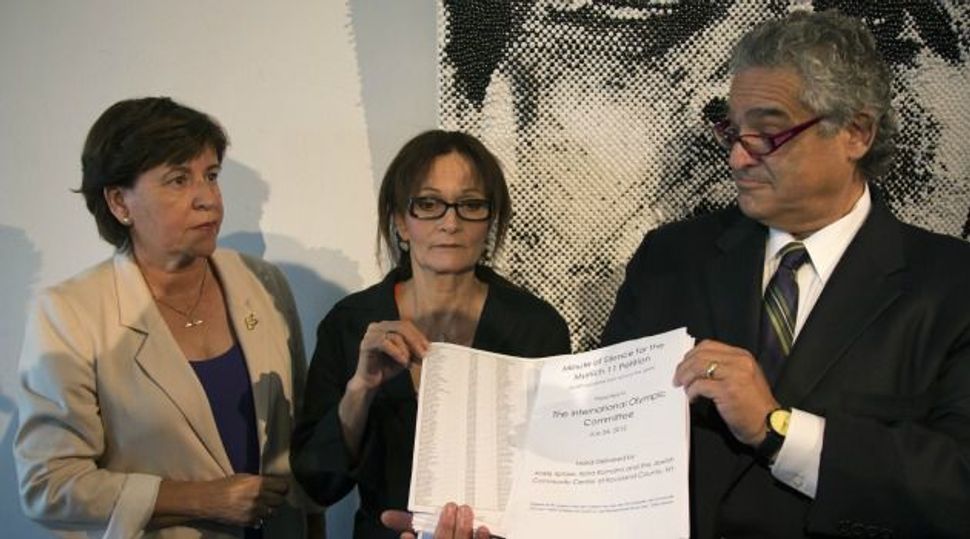 Not Satisfied: The widows of the Israeli athletes killed at the Munich Olympics spoke out against Olympic committee chief Jacques Rogge at a ceremony marking the terror attack. Image by getty images

The International Olympic Commmittee (IOC) and its president Jacques Rogge were severely criticized last night at an event commemorating the Munich Eleven. Rogge sat through the event as he was attacked.

The London memorial event for the fortieth anniversary of the murder of eleven Israeli sportsmen at the 1972 Olympics in Munich was unprecedented in its size and the level of participation. Over 700 people attended at the magnificent Guildhall. It was attended by British Prime Minister David Cameron, his deputy Nick Clegg, the Leader of the opposition Ed Miliband and London’s Mayor Boris Johnson, messages were read out from U.S. President Barack Obama and Prince Charles, but all eyes were on IOC President Jacques Rogge.

Rogge was one of the first speakers, reminded his listeners, who were mainly leaders from the British Jewish community and members of Israel’s Olympic delegation and sport establishment that he had participated himself as an athlete at the Munich Olympics and that he was there today “to speak with one voice against terrorism” calling the Munich attack “a direct assault on the core values of the Olympics.”

But the most coruscating criticism came from Ankie Spitzer and Ilana Romana, two of the widows of the Munich Eleven who have lead the campaign for a moment’s silence in their memory and even called last week not to allow Rogge to attend the ceremony. Spitzer said that “the IOC remain deaf and blind” to the widespread support for remembrance and that the international sporting organizations “is only interested in power, money and politics. They forgot that they were supposed to support peace and brotherhood.” She said that the event to remember the Munich Eleven, “should not be in this London Guildhall, or at the Beijing Hilton or in the backyard of the Israeli ambassador in Athens, it should be in the framework of the Olympics.” She accused the IOC of having “forsaken eleven members of the Olympic family” and for “discriminating against them simply because they are Israelis and Jews.”