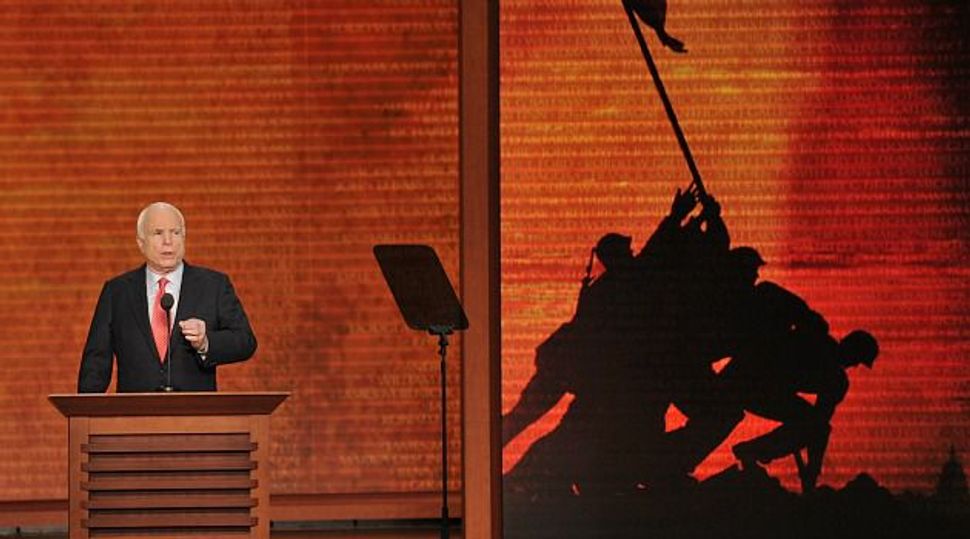 Israel is under “existential threat” and is among the American allies suffering from the Obama administration’s leadership failures, Sen. John McCain suggested in his speech to the Republican convention.

“Unfortunately, for four years, we’ve drifted away from our proudest traditions of global leadership – traditions that are truly bipartisan,” McCain said Wednesday evening at the convention in Tampa, Fla.

“We’ve let the challenges we face, both at home and abroad, become harder to solve,” McCain said. “We can’t afford to stay on that course any longer. We can’t afford to cause our friends and allies – from Latin America to Asia, Europe to the Middle East, and especially in Israel, a nation under existential threat – to doubt America’s leadership.”

McCain spoke on a night that the Romney campaign sought to highlight its foreign policy differences with the Obama administration. The evening also included a speech by Condoleezza Rice, the former secretary of state, who notably refrained from endorsing either McCain or Obama in 2008.

“We cannot be reluctant to lead, and you cannot lead from behind,” she said, alluding to an unnamed Obama aide’s description of the administration’s Libya policy that has drawn persistent derision from Republicans since it was published lasy year.

“Our friends an allies must be able to trust us, from Israel to Colombia, from Poland to the Phillipines,” she said.