On Iran Strike, U.S. Should Not Be ‘Complicit’: General 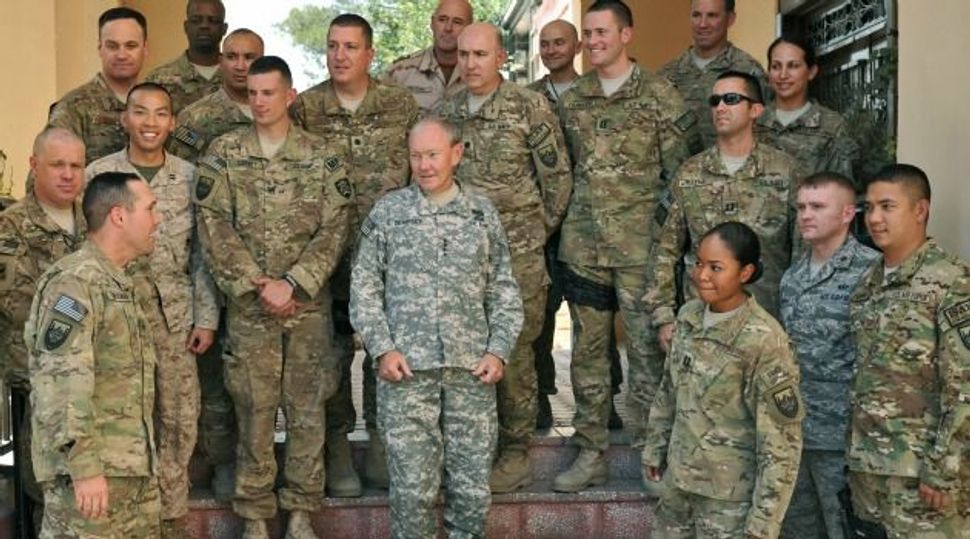 Not Now Gen. Martin Dempsey says the U.S. should not be involved in any strike on Iran. Image by getty images

General Martin Dempsey, Chairman of the Joint Chiefs of Staff of U.S. armed forces, does not wish to be “complicit” in a unilateral Israeli strike on Iran.

The Guardian reported that Dempsey said in London that such an attack would “clearly delay but probably not destroy Iran’s nuclear program.” He added, “I don’t want to be complicit if they choose to do it.”

Dempsey was speaking with journalists while attending the opening ceremony of the Paralympic Games. He is serving as head of the U.S. delegation to the competition.

The U.S. official said he did not know Iran’s nuclear intentions, as intelligence did not clearly reveal them, according to the Guardian. What was clear, Dempsey added, was that the “international coalition” applying pressure on Iran “could be undone if [Iran] was attacked prematurely.” Sanctions against Iran were having an effect, and they should be given more of an opportunity to succeed, he told the newspaper.

As for the Syrian uprising against the Assad regime, he told the Guardian that Washington was collaborating with that country’s neighbours, sharing intelligence and helping with military planning. The United States is supplying humanitarian aid to Syrian refugees in Turkey.

Dempsey also warned of the implications of establishing a “humanitarian zone” inside Syria, as countries such as France have suggested. Syria was not Libya, he said. Last year that North African country overthrew its long-time dictator in part with the help of a “no-fly zone” set up by western countries to both provide cover for rebels and to protect civilians.

On Iran Strike, U.S. Should Not Be ‘Complicit’: General