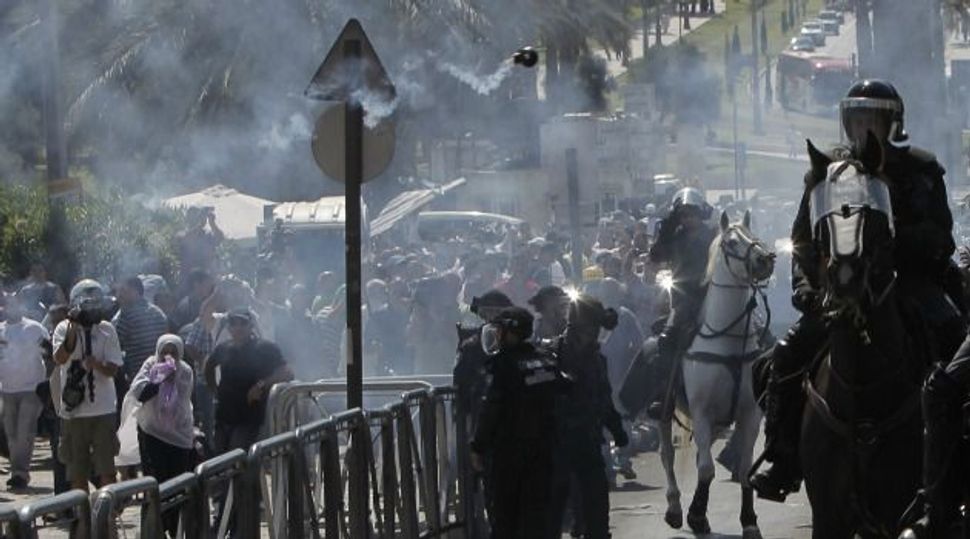 Fury about a film that insults the Prophet Mohammad tore across the Middle East on Friday, including the Palestinian territories, with protesters attacking U.S. embassies and burning American flags as the Pentagon rushed to bolster security at its missions.

Protests erupted for the first time in Gaza and the West Bank. In East Jerusalem, Israeli troops battled angry demonstrators after Friday prayers.

The obscure California-made film triggered an attack on the U.S. consulate in Libya’s city of Benghazi that killed the U.S. ambassador and three other Americans on Tuesday, the anniversary of the Sept. 11, 2001 al Qaeda attacks on the United States.

In Tunis, at least three people were killed and more than two dozen wounded, state television said after police gunfire near the U.S. embassy in the city that was the cradle of last year’s Arab Spring uprisings for democracy. At least one person died in the Sudanese capital Khartoum, a doctor said, after some of thousands of protesters had leaped into the U.S. embassy.

As U.S. military drones faced Islamist anti-aircraft fire over Benghazi, about 50 marines landed in Yemen a day after the U.S. embassy there was stormed. For a second day in the capital Sanaa, police battled hundreds of young men around the mission.

In Khartoum, wider anger at Western attitudes to Islam also saw the German embassy overrun, with police doing little to stop demonstrators who raised a black Islamist flag. Violence at the U.S. embassy followed protests against both Washington and the Sudanese government, which is broadly at odds with the West.

The wave of indignation and rage over the film, which portrays Mohammad as a womaniser and a fool, coincided with Pope Benedict’s arrival in Lebanon for a three-day visit.

The protests present U.S. President Barack Obama with a new foreign policy crisis less than two months before seeking re-election and tests Washington’s relations with democratic governments it helped to power across the Arab world.

He was at Andrews Air Force Base near Washington to greet a flight bringing home remains of the four dead from Benghazi.

It also emerged that Libya had closed its airspace over the second city’s airport for a time because of heavy anti-aircraft fire by Islamists aiming at U.S. reconnaissance drones flying over the city; Obama vowed to bring the ambassador’s killers to justice.

The closure of the airport prompted speculation that the United States was deploying special forces in preparation for an attack against the militants who were involved in the attack.

A Libyan official said the spy planes flew over the embassy compound and the city, taking photos and inspecting locations of radical militant groups who are believed to have planned and staged the attack on the U.S. consulate.

There were protests in the Middle East, Africa and Asia.

The Pentagon said it had sent a “fast” platoon of Marines to Yemen to bolster U.S. embassy security after clashes in Sanaa.

U.S. embassies were the main target of anger and protest but most embassy staff were not at work because Friday is the Muslim weekend across the Arab World.

The frenzy erupted after traditional Muslim Friday prayers. Fury over the film has been stoked by Internet video footage, social networks, preachers and word-of-mouth.

Protesters clashed with police near the U.S. embassy in Cairo. Two Islamist preachers in Egypt told worshippers that those who made the movie deserved to die under Islamic law but they urged protesters not to take their anger out on diplomats.

In the restive Sinai peninsula, militants opened fire on an international observer base near El Gorah, close to the borders of Israel and the Gaza Strip, and burned tires blocking a road to the camp, a witness and a security source reported. The source said two members of the force were wounded.

The Sudanese who broke into the German embassy in Khartoum and hoisted an Islamic flag, while one person was killed in protests in the northern Lebanese city of Tripoli.

Police in the Sudanese capital had fired tear gas to try to disperse 5,000 protesters who had ringed the German embassy and nearby British mission. A Reuters witness said police stood by as a crowd forced its way into Germany’s mission.

Demonstrators hoisted a black Islamic flag saying in white letters “there is no God but God and Mohammed is his Prophet”. They smashed windows, cameras and furniture in the building and then started a fire.

Staff at Germany’s embassy were safe “for the moment”, Foreign Minister Guido Westerwelle said in Berlin. He also told Khartoum’s envoy to Berlin that Sudan must protect diplomatic missions on its soil.

Sudan’s Foreign Ministry had criticised Germany for allowing a protest last month by right-wing activists carrying caricatures of the Prophet and for Chancellor Angela Merkel giving an award in 2010 to a Danish cartoonist who depicted the Prophet in 2005 triggering protests across the Islamic world.

President Omar Hassan al-Bashir is under pressure from Islamists who feel the government has given up the religious values of his 1989 Islamist coup.

The official body of Sudan’s Islamic scholars called for the faithful to defend the Prophet peacefully, but at a meeting of Islamists, some leaders had said they would march on the German and U.S. embassies and demanded the ambassadors be expelled.

The Foreign Ministry said in its statement: “The German chancellor unfortunately welcomed this offence to Islam in a clear violation of all meanings of religious co-existence and tolerance between religions.”

Sudan used to host prominent militants in the 1990s, such as Osama bin Laden, but the government has sought to distance itself from radicals to improve ties with the West.

A Lebanese security source said a man was killed in Tripoli as protesters tried to storm a government building.

Earlier, a U.S. fast food restaurant was set alight. Twelve members of the security forces were wounded by stones thrown by protesters, the source said.

Protesters also clashed with police in Yemen, where one person died and 15 were injured on Thursday when the U.S. embassy compound was stormed.

U.S. and other Western embassies in other Muslim countries had tightened security, fearing anger at the film may prompt attacks on their compounds after the weekly worship.

Obama has promised to bring those responsible for the Benghazi attack to justice, and the United States also sent warships towards Libya which one official said was to give flexibility for any future action.

U.S. Secretary of State Hillary Clinton said Washington had nothing to do with the crudely made film posted on the Internet, which she called “disgusting and reprehensible”, and the Chairman of the U.S. Joint Chiefs of Staff called a Christian pastor in Florida to ask him to withdraw his support for it.

Palestinians staged demonstrations in both the occupied West Bank and Gaza Strip.

Israeli police, some on horseback, used stun grenades and made a number of arrests outside Jerusalem’s Old City as a few dozen demonstrators tried to march on the nearby U.S. consulate.

“Israeli police prevented an illegal demonstration from reaching the U.S. consulate in East Jerusalem and used stun grenades after rocks and bottles were thrown at them,” police spokesman Micky Rosenfeld said.

The largest protests were in the Gaza Strip, which is controlled by Islamist group Hamas, with at least 30,000 Palestinians staging rallies across the coastal territory.

Some 25,000 took to the streets of Gaza City, answering a call by Hamas and the smaller Islamic Jihad faction and waving the green and black flags of the two factions.

American and Israeli flags were set alight, along with an effigy of the film’s producer.

Protesters in Afghanistan set fire to an effigy of Obama and burned a U.S. flag after Friday prayers in the eastern province of Nangarhar.

Directing their anger against the U.S. pastor who supported the film, tribal leaders also agreed to put a $100,000 bounty on his head.

About 10,000 people held a noisy protest in the Bangladeshi capital. They burned U.S. flags, chanted anti-U.S. slogans and demanded punishment for the offenders, but were stopped from marching to the U.S. embassy. There was no violence.