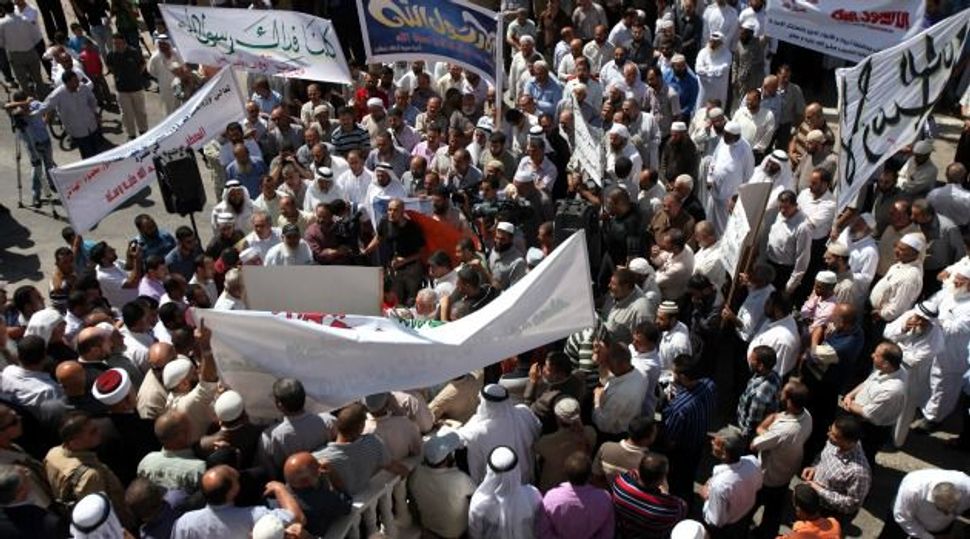 Protesters enraged by a film mocking the Prophet Mohammad battled with police in several Asian cities on Monday and vented their fury against the United States, blaming it for what they see as an attack on the Muslim religion.

Police fired in the air to break up a crowd marching on the U.S. consulate in the Pakistani city of Karachi while in Afghanistan and Indonesia people burnt U.S. flags and chanted “Death to America”.

Indonesian police fired tear gas and water cannon to disperse hundreds of demonstrators who massed outside the U.S. Embassy in Jakarta, capital of the most populous Muslim nation.

In Kabul, protesters set fire to cars and shops and threw stones at police.

“We will defend our prophet until we have blood across our bodies. We will not let anyone insult him,” said one protester in the Afghan capital. “Americans will pay for their dishonour.”

Thousands also marched in Beirut, where a Hezbollah leader accused U.S. spy agencies of being behind events that have unleashed a wave of anti-Western sentiment in the Muslim and Arab world.

The demonstrations were the latest across the world ignited by a short film made with private funds in the United States and posted on the Internet that depicted the Prophet Mohammad as a fool, a womaniser and a homosexual.

The situation saddles U.S. President Barack Obama with an unexpected foreign policy headache as he campaigns for re-election in November, even though his administration has condemned the film as reprehensible and disgusting.

In a torrent of violence last week, the U.S. ambassador to Libya and three other Americans were killed in an attack in Benghazi and U.S. and other foreign embassies were stormed in cities in Asia, Africa and the Middle East by furious Muslims. At least nine other people have been killed.

Washington has sent ships, extra troops and special forces to protect U.S. interests and citizens in the Middle East, while a number of its embassies have evacuated staff and are on high alert for trouble.

A White House spokesman said Obama spoke by telephone to senior diplomats at the weekend to reassure them of his support.

“He called the chiefs of mission in Sudan, Tunisia, Libya and Yemen to let those diplomats know that he was thinking about them, that their safety remains a top priority of his, and it is something he will remain focused on,” spokesman Josh Earnest said.

Despite Obama’s efforts early in his tenure to improve relations with the Arab and Muslim world, the new violence adds to a host of problems including the continued U.S. military involvement in Afghanistan, Iran’s nuclear programme, the Syrian civil war and the fall-out from the Arab Spring revolts.

The renewed protests on Monday dashed any hopes that the furore over the film might fade despite an appeal over the weekend from the senior cleric in Saudi Arabia, home to Islam’s holiest shrines, for calm.

In the Kabul demonstration, protesters shouted “Death to America” and burned the flags of the United States and of Israel, a country reviled by many Muslims and Arabs because of the Palestinian issue.

The U.S., British and other missions were placed on lockdown and violence flared near housing compounds for foreign workers.

In Karachi, Pakistan’s commercial hub, protesters on motorcycles and in cars headed towards the U.S. consulate, prompting police to shoot in the air and fire teargas. Police said 30 students were arrested.

In Lahore, Pakistani protesters threw rocks at police and burned an American flag near the U.S. consulate. Police said six policemen and some protesters were hurt.

Pakistani Prime Minister Raja Pervez Ashraf ordered the blocking of YouTube in the country so that the “blasphemous” film could not be viewed, the information ministry said.

His U.S.-backed government faces a Taliban insurgency supported by al Qaeda and other militant groups but anti-U.S. feeling is never far from the surface.

In Beirut, Hezbollah leader Sayyed Hassan Nasrallah made a rare public appearance to address tens of thousands of Lebanese protesting against the film.

“Prophet of God, we offer ourselves, our blood and our kin for the sake of your dignity and honour,” said Nasrallah, who has lived in hiding to avoid assassination since the Shi’ite Muslim militant movement fought a war with Israel in 2006.

On television earlier, Nasrallah said the United States must be held accountable and that U.S. intelligence agencies were orchestrating events.

In Tunisia, a Salafist leader escaped from a mosque that had been surrounded by security forces seeking to arrest him over clashes at the U.S. Embassy last week, a Reuters witness said.

Saif-Allah Benahssine, leader of the Tunisian branch of the hardline Islamist Ansar al-Sharia, slipped away after hundreds of his followers stormed out of al-Fatah mosque in Tunis.

Benahssine told his supporters earlier he was not involved in the protests, in which two people were killed when police opened fire as protesters ransacked the U.S. mission.

Also on Monday police in Azerbaijan arrested about 15 people who tried to protest outside the U.S. Embassy in Baku.

Rallies had taken place as far afield as Britain and Australia at the weekend, showing the global scale of the outrage at the Prophet Mohammad film.

In other developments, Iran condemned the film as offensive and vowed to pursue those responsible for making it.

“Certainly it will search for, track, and pursue this guilty person who has insulted 1.5 billion Muslims in the world,” First Vice-President Mohammad Reza Rahimi told a cabinet meeting.

Iranian officials have demanded the United States apologise to Muslims for the film, saying it is only the latest in a series of Western insults aimed at Islam’s holy figures.

The identity of those directly responsible for it remains unclear. Clips posted online since July have been attributed to a man named Sam Bacile, which two people connected with the film have said was probably an alias.

Nakoula Basseley Nakoula, 55, a Coptic Christian widely linked to the film in media reports, was questioned in California on Saturday by U.S. authorities investigating possible violations of his probation for a bank fraud conviction.