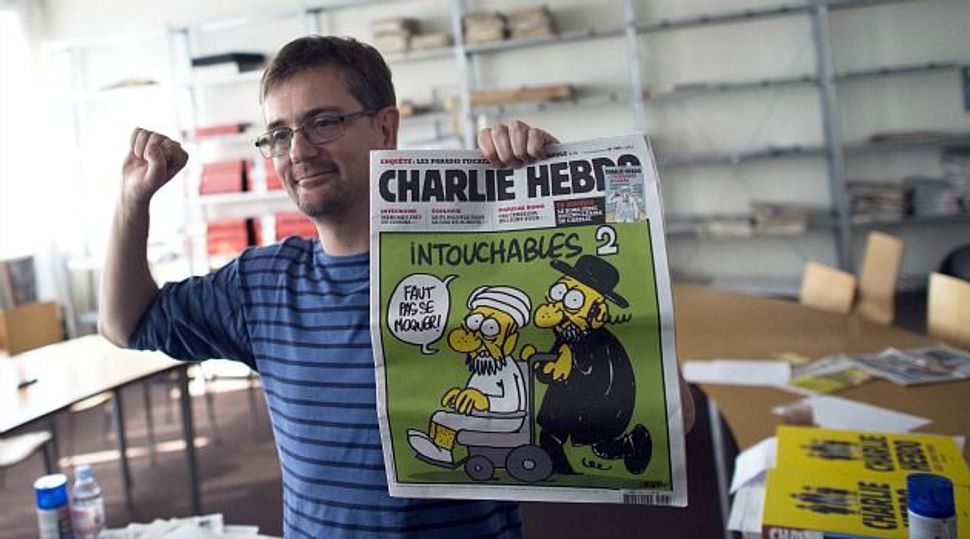 A French magazine ridiculed the Prophet Mohammad on Wednesday by portraying him naked in cartoons, threatening to fuel the anger of Muslims around the world who are already incensed by a video depicting him as a lecherous fool.

The drawings in the satirical weekly Charlie Hebdo risked exacerbating a crisis that has seen the storming of U.S. and other Western embassies, the killing of the U.S. ambassador to Libya and a deadly suicide bombing in Afghanistan.

Riot police were deployed to protect the paper’s Paris offices after it hit news stands.

It featured several caricatures of the Prophet showing him naked in what the publishers said was an attempt to poke fun at the furore over the film. One, entitled “Mohammad: a star is born”, depicted a bearded figure crouching over to display his buttocks and genitals.

The French government, which had urged the weekly not to print the cartoons, said it was shutting embassies and schools in 20 countries as a precaution on Friday, when protests sometimes break out after Muslim prayers.

Arab League Secretary-General Nabil Elaraby called the drawings outrageous but said those who were offended by them should “use peaceful means to express their firm rejection”.

Tunisia’s ruling Islamist party, Ennahda, condemned what it called an act of “aggression” against Mohammad but urged Muslims not to fall into a trap intended to “derail the Arab Spring and turn it into a conflict with the West”.

In the northern Paris suburb of Sarcelles, one person was slightly hurt when two masked men threw a small explosive device through the window of a kosher supermarket. Police said it was too early to link the incident to the cartoons. One small local Muslim group filed a legal complaint against the weekly but there were no reports of reaction on the streets of France.

The posting on YouTube last week of a crude video, made in California, that mocked Mohammad as a womanising buffoon has sparked protests in many countries, some of them deadly.

The U.S. envoy to Libya and three other Americans were killed in an attack in Benghazi, and U.S. and other foreign embassies were attacked in cities in Asia, Africa and the Middle East by furious Muslims.

The furore has emerged as an issue in the U.S. presidential election campaign and sparked international debate over free speech, religion and the right to offend. Many Muslims consider any representation of Allah or the Prophet Mohammad blasphemous.

The United States has condemned the content of the video while defending the right to free speech, and took a similar line on the French cartoons.

“We know that these images will be deeply offensive to many and have the potential to be inflammatory. But we’ve spoken repeatedly about the importance of upholding the freedom of expression that is enshrined in our constitution,” White House spokesman Jay Carney told reporters.

“In other words, we don’t question the right of something like this to be published, we just question the judgment behind the decision to publish it.”

In the Lebanese city of Sidon, around 10,000 people joined a march organised by the Shi’ite group Hezbollah to protest against the film and the cartoons, shouting “Enough humiliation!” and “Death to America! Death to Israel!”.

In Egypt, Essam Erian, acting head of the Muslim Brotherhood’s Freedom and Justice Party, told Reuters: “We reject and condemn the French cartoons that dishonour the Prophet and we condemn any action that defames the sacred according to people’s beliefs.”

At the same time, rights groups demanded the release of a Coptic Christian computer science graduate who they said had been beaten up and arrested in Cairo on suspicion of re-posting the anti-Islam video online.

In France, a joint statement by Catholic bishop Michel Dubost and Mohammed Moussaoui, president of the French Muslim Council, defended the right to freedom of expression under the cherished French principles of “Liberty, Equality, Fraternity”.

“But freedom endangers itself if it forgets fraternity and respect for everyone’s equal right to dignity,” they added.

French Foreign Minister Laurent Fabius called the publication of the cartoons a provocation.

“We saw what happened last week in Libya and in other countries such as Afghanistan,” he told a regular news conference. “We have to call on all to behave responsibly.”

France’s ambassador to Iran sent French citizens there a message urging them to exercise great caution, especially on Friday, and around diplomatic missions and places of worship.

But Charlie Hebdo’s editor, Stephane Charbonnier, rejected the criticism. “We have the impression that it’s officially allowed for Charlie Hebdo to attack the Catholic far-right but we cannot poke fun at fundamental Islamists,” he said.

“It shows the climate. Everyone is driven by fear, and that is exactly what this small handful of extremists who do not represent anyone want: to make everyone afraid, to shut us all in a cave,” he told Reuters.

One cartoon alluded to the scandal over a French magazine’s publication of topless photos of the wife of Britain’s Prince William. It showed a bare female torso topped by a beard with the caption “Riots in Arab countries after photos of Mrs Mohammad are published”.

Charlie Hebdo is no stranger to controversy. Its Paris offices were firebombed last November after it published a mocking caricature of Mohammad, and Charbonnier has been under police guard ever since.

Speaking outside his offices in an eastern neighbourhood with many residents of North African origin, Charbonnier said he had not received any threats over the latest cartoons. In a message on its Twitter account, Charlie Hebdo said its website had been hacked, but referred readers to a blog it also uses.

In 2005, Danish cartoons of the Prophet sparked a wave of protests across the Muslim world in which at least 50 died.

France is already on alert for attacks by al Qaeda on French interests in West Africa.

A diplomatic source said this week that Paris had recently foiled attacks on economic and diplomatic targets and had credible evidence that more were planned.

“Al Qaeda in the Islamic Maghreb is a direct and immediate threat,” the source said.