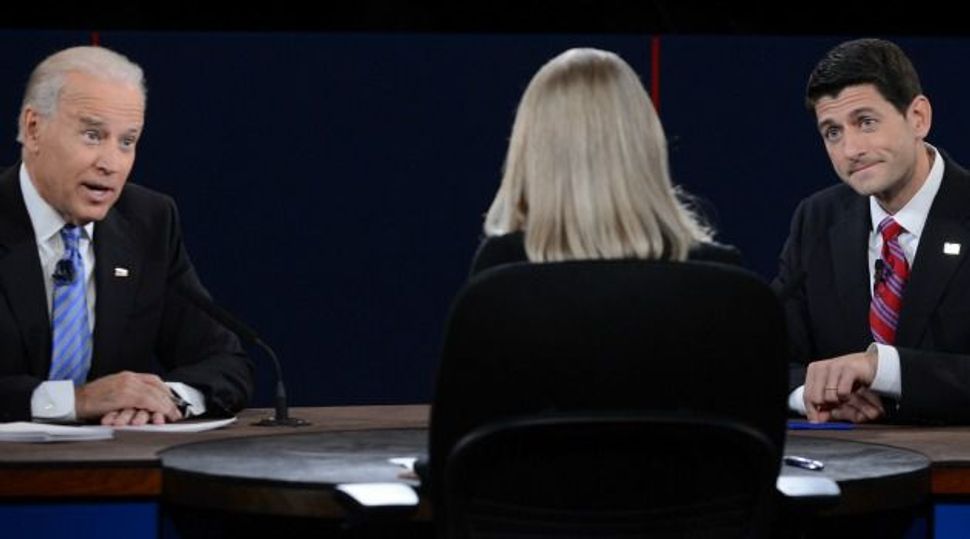 Fighting Mad: Joe Biden and Paul Ryan came out swinging on the U.S. policy toward Iran and relations with Israel in their vice presidential debate. Image by getty images

“They say the military option’s on the table, but it’s not being viewed as credible, and the key to do this peacefully is to make sure that we have credibility,” Ryan said. “Under a Romney administration, we will have credibility on this issue.”

Biden responded by noting the president’s repeated public statements that the U.S. will not tolerate a nuclear-armed Iran and touting the toughness of international sanctions that the administration has secured against the Islamic Republic. “These are the most crippling sanctions in the history of sanctions, period,” Biden said.

Biden asked Ryan: “You’re talking about doing more, are you going to war? Is that what you want to do now?” Ryan replied: “We want to prevent war.”

The Iranian nuclear issue was raised by the debate moderator, journalist Martha Raddatz, who said that “there’s really no bigger national security” issue facing the U.S. In their responses, the two candidates echoed the positions articulated by their respective running mates, with Ryan stressing that Iran must not be permitted a nuclear weapons “capability” and Biden emphasizing that Iran should be prevented from acquiring a nuclear weapon.

Ryan said that Iran was “four years closer toward a nuclear weapons capability” and added that U.S. sanctions on Iran were only implemented by Congress “in spite of the administration.”

Regarding the possibility of U.S. military action, Biden said “we feel quite confident we could deal a serious blow to the Iranians.” But the vice president added that Iran is “a good way away” from getting a nuclear weapon, adding that “there is no difference” between the Israeli and American assessments on this point. Biden said that “both the Israelis and we will know if they start the process of building a weapon.”

Ryan also criticized Obama for not meeting with Israeli Prime Minister Benjamin Netanyahu during his recent U.S. visit, to which Biden responded that Obama has “spoken to Bibi Netanyahu as much as he’s spoken to anybody.”

Referring to the Iranian bomb illustration that Netanyahu presented at the U.N. General Assembly, Biden said: “We will not allow the Iranians to get a nuclear weapon. What Bibi held up there was: when they get to the point where they can enrich uranium enough to put into a weapon. They don’t have a weapon to put it into. Let’s all calm down a little bit here. Iran is more isolated today than when we took office.”

The vice president criticized “all this loose talk about ‘All they have to do is get to enrich uranium in a certain amount and they have a weapon.’ Not true.” He added that “if we ever have to take action, unlike when we took office, we will have the world behind us, and that matters.”

Asked by Raddatz which would be worse, war or a nuclear-armed Iran, Ryan answered that the more dangerous scenario would be “a nuclear-armed Iran which triggers a nuclear arms race in the Middle East. This is the world’s largest sponsor of terrorism. They’ve dedicated themselves to wiping an entire country off the map. They call us the Great Satan, and if they get nuclear weapons, other people in the neighborhood will pursue their nuclear weapons as well.”

Biden said that “war should always be the absolute last resort” and stressed that sanctions are crippling for Iran. Echoing Obama’s past statements on the issue of all options being on the table, Biden said: “We’ve made it clear: Big nations can’t bluff. This president doesn’t bluff.”