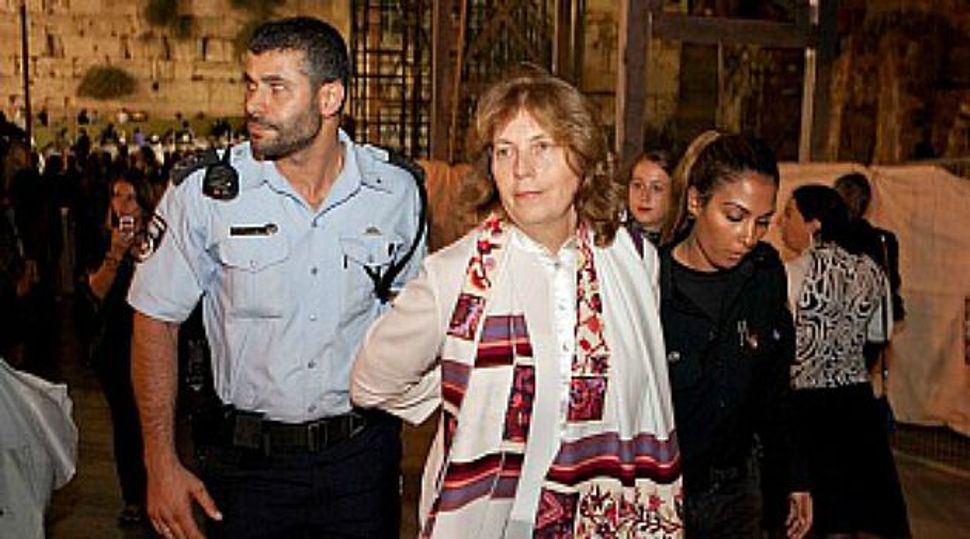 Reform Jewish leaders are calling for an investigation following reports that an Israeli colleague was roughed up by police after leading a women’s prayer group at the Western Wall.

Reform leaders in the United States said Thursday that they have spoken with Israel’s ambassador in Washington, Michael Oren, about the incident involving Anat Hoffman, executive director of the Reform movement’s Israel Religious Action Center and chair of the Women of the Wall.

Hoffman on Tuesday night was leading a service with more than 200 women marking the start of the Hebrew month of Cheshvan and celebrating the 100th anniversary of Hadassah, which is holding its convention in Jerusalem.

She told reporters that as she began singing the Shema prayer, police told her that if she did not stop she would be arrested. When she failed to halt, Hoffman said she was handcuffed and taken into custody for wearing a tallit and disturbing public order.

At the police station, she told the Forward, “They checked me naked, completely without my underwear. They dragged me on the floor 15 meters; my arms are bruised.” Hoffman added that she was put in a cell without a bed with three prisoners, including a prostitute and a car thief. She lay down and covered herself with her tallit.

Following a court appearance early Wednesday afternoon, Hoffman was released from custody and issued a restraining order from going to the Wall for 30 days.

Israeli police have not commented on the reports.

Calling Hoffman “a courageous champion of social justice,” Rabbi Rick Jacobs, president of the Union for Reform Judaism, said Hoffman’s treatment “is deplorable and degrading.” He called on Israel’s police minister to investigate the matter and “ensure that the right of women to pray at the Wall is protected.”

Rabbi David Saperstein, director of the Religious Action Center for Reform Judaism, added that “There is no denominational monopoly on the spirituality” of the Western Wall and “it is intolerable that any woman should be arrested for praying at one of Judaism’s most cherished sites.”

Barbara Kavadias, acting executive director of the Association of Reform Zionists of America said, “Anat Hoffman has been arrested for doing what Jewish women all over the world do on a regular basis: pray as Jews.”

In 2003, Israel’s Supreme Court upheld a government ban on women wearing tefillin or tallit or reading from a Torah scroll at the Wall. Women of the Wall has held a special prayer service at the Wall’s section for women almost each month for the last 20 years on Rosh Chodesh, the beginning of the new Hebrew month.

In August, Jerusalem police arrested four women at the Wall for “behavior that endangers the public peace” and wearing prayer shawls. They were forbidden to enter the Western Wall Plaza for the next 50 days, according to the organization. In June, Israeli police detained a woman wearing a tallit at the Wall and later questioned her for four hours after asking her to wear her prayer shawl as a scarf.