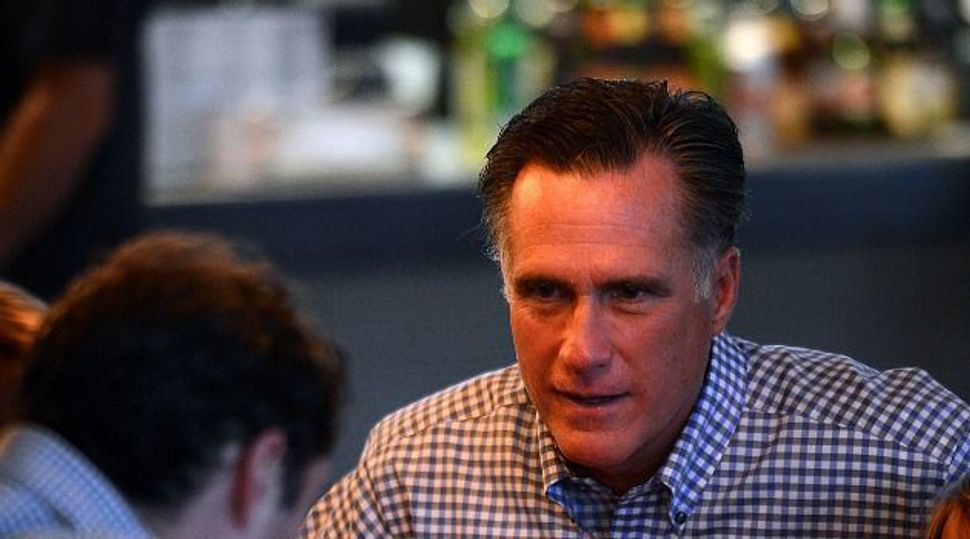 Republican presidential nominee Mitt Romney at the Monday foreign policy debate, should play to the Jewish TV audience like he was the star of a Borscht Belt revue.

Romney has a tempting assortment of issues he can tap to frame President Barack Obama as a leader whose policies are perilous for Israel. He can use the Israeli-Palestinian conflict, Iran, Egypt and even Syria to make a case that Obama’s policies are wrong for the Jewish state.

Given the tenuous state of relations between Israel and the United States, it’s surprising that, according to a recent American Jewish Committee survey of Jewish opinion, 61 percent approve of Obama’s handling of U.S.-Israeli relations, while 39 percent disapprove. Those are numbers Romney needs to change Monday night.

He is not going to win the Jewish vote. Obama overpowered Senator John McCain in 2008 by 78 percent to 22 percent among Jews, and the most recent Gallup poll puts Obama ahead this year by 70 percent to 25 percent. But if Romney can narrow that 45 percent margin between him and Obama, he will increase his chance of becoming president.

While Jews are a small minority in the United States, they generally get to the polls in big numbers. Several swing states are home to relatively large populations of Jews, particularly Florida, Nevada and Pennsylvania, but also Virginia, Ohio and Colorado.

Florida tops the list – 3.4 percent of registered voters are Jewish. Yet, because of strong turnout, Jews comprise as many as 8 percent of those who actually cast ballots.

With the margins in some of these states expected to be razor thin, a small shift in any segment of the voting population could make the difference between victory and defeat.

While it’s true that Jewish voters say they put other issues ahead of Israel, it’s hard to overestimate the tug of the Holy Land on Jewish heartstrings.

According to the American Jewish Committee poll, 71 percent of American Jews agree “somewhat” or “strongly” with the statement, “Caring about Israel is a very important part of my being a Jew.” Support for Israel among Jews extends equally across the political spectrum.

What’s more, playing the Israel card in Monday night’s debate will further energize Christian conservatives, many of whom are passionately pro-Israel.

Romney can dramatize his difference with Obama by suggesting that with Iran’s nuclear program moving forward, no less than the existence of Israel may be at stake in this election.

Though the jury is still out on Obama’s strategy to stop Iran, Romney can argue that so far, little has been done to impede Iran’s progress, and Tehran is far closer to getting their bomb than at the outset of Obama’s presidency. If Obama’s strategy fails, Israel could be eradicated.

Romney can contrast his approach to Obama’s by directly threatening military action, a sharper line than Obama’s customary position that “all options are on the table.”

He can impart a sense of urgency on the issue that the administration has seemed to lack. Vice President Joe Biden offered Romney a perfect foil during the vice presidential debate with his admonition, “Let’s all calm down a little bit here” about the Iranian threat.

The Israeli-Palestinian question offers multiple avenues for a Romney attack, starting with the widespread perception that Obama has tilted more to the Palestinians than previous presidents.

Obama’s contention that negotiations should begin with the assumption that the result must be a return to the pre-1967 Arab-Israeli borders is regarded by many as a subtle shift in policy – which means the Palestinians will have already won a concession. One, Romney might note, that puts Israel back to a perilous time when its narrowest width was nine miles.

The confusion over Obama’s posture toward Jerusalem is also ready-made for Romney. The Democratic Party platform initially omitted its usual assertion that Jerusalem is the capital of Israel. The addition of such language had to be railroaded through over the opposition of many Democratic convention goers.

Fifty-one percent of Jews oppose compromising on Jerusalem, according to an August 2010 Brandeis University poll, compared to only 29 percent who would even talk about the issue.

Obama’s frosty relationship with Israeli Prime Minister Benjamin Netanyahu is another issue Romney can highlight. Netanyahu is strongly supported by American Jews, though he is far more conservative than they are. And Romney is personally close to Netanyahu – he has known him for decades and worked with him as well.

Obama also strongly supported the Egyptian revolution, which has led to a regime less friendly to Israel than that of Hosni Mubarak – and less able or willing to control extremist elements operating against Israel out of the Sinai.

Meanwhile, Obama has been hesitant to aggressively back the overthrow of Israel’s longtime nemesis, President Bashar al-Assad of Syria, the enduring partner of the anti-Israeli terrorist outfit, Hezbollah.

Romney has a unique opportunity to use all these issues to frame himself as the guardian of Israel’s future. He needs to raise enough questions in the minds of Jewish voters about what kind of harm Obama will do to Israel once he no longer needs the Jewish vote.

He could even open the debate with the classic joke about the Jewish telegram: “Start worrying. Details to follow.”