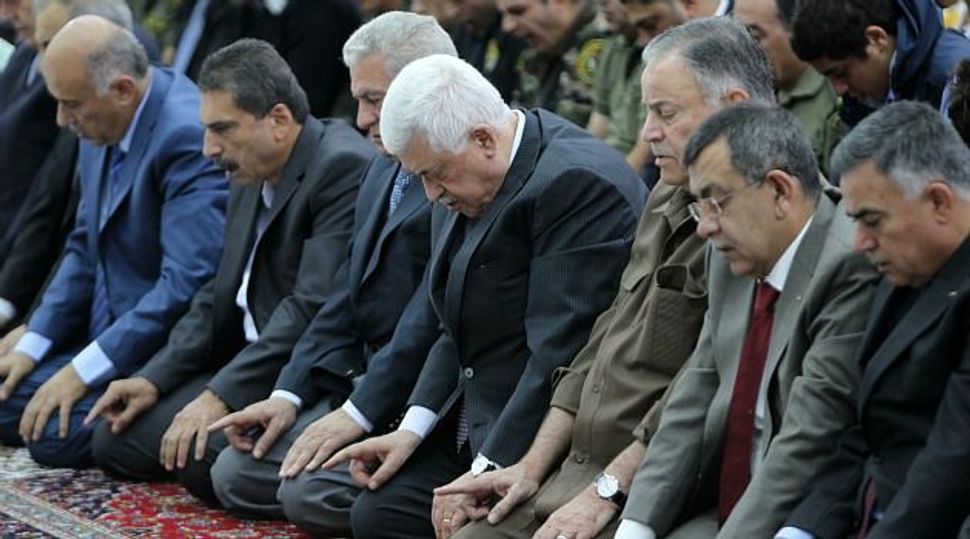 No Right: Palestinian President Mahmoud Abbas told Israeli TV that he has no right of return to the town from which his family was driven during Israel?s independence war. Image by getty images

Palestinian President Mahmoud Abbas made a rare if symbolic concession to Israel on Thursday, saying he had no permanent claim on the town from which he was driven as a child during the 1948 war of the Jewish state’s founding.

Among several disputes deadlocking Middle East peace talks has been the Palestinians’ demand that as many as five million of their compatriots be granted the right to return to lands in Israel that they or their kin lost.

Israel rules this out, fearing an influx of Arabs that would eliminate its Jewish majority, and argues the refugees should resettle in a future Palestinian state in the West Bank and Gaza Strip, territories it occupied in the 1967 war.

Speaking to the top-rated Israeli television newscast, Abbas was asked whether he wanted to live in Safed, his boyhood town in the Galilee region of what had been British-ruled Palestine and is now northern Israel.

“I visited Safed before once. But I want to see Safed. It’s my right to see it, but not to live there,” Abbas told Channel 2, speaking in English from the West Bank city of Ramallah.

“Palestine now for me is ‘67 borders, with East Jerusalem as its capital. This is now and forever … This is Palestine for me. I am (a) refugee, but I am living in Ramallah. I believe that (the) West Bank and Gaza is Palestine and the other parts (are) Israel.”

Abbas has defied Israel and the United States by planning to ask the U.N. General Assembly to upgrade the Palestinians to a non-member state. Facing possible punitive Israeli and U.S. sanctions, Abbas has promised an immediate return to peace talks after the U.N. vote, which the Palestinians are likely to win.

The televised remarks, which were excoriated by Abbas’s Palestinian Islamist rivals, also appeared aimed at influencing Israelis ahead of their Jan. 22 legislative election.

Polls currently predict an easy win for Prime Minister Benjamin Netanyahu, a rightist who says he wants to restart talks with Abbas but who has championed Jewish settlement of East Jerusalem and the West Bank – the reason the Palestinians gave for breaking off the last round of negotiations in 2010.

Some Netanyahu government officials have voiced scepticism about Abbas’s ability to deliver a peace accord, after he lost control of Gaza – from which Israel withdrew in 2005 – to Hamas Islamists in a brief civil war two years later.

On Channel 2, Abbas sought to play up his security control over Palestinian-run areas of the West Bank, saying that as long as he was in power “there will no armed, third armed Intifada (revolt against Israel). Never.”

Netanyahu’s office had no immediate comment on the interview, which was aired as the prime minister returned from a visit to France. Israel has long blamed Abbas for the stalled diplomacy, saying his insistence it freeze settlements – which are widely viewed as illegal abroad – amounted to preconditions.

Paul Hirschson, a spokesman for Israel’s Foreign Ministry, said the onus remained on Abbas to return to negotiations:

“If he (Abbas) wants to see Safed, or anywhere else in Israel, for that matter, we would happily show him anywhere. But there has to be a desire to move forward on the peace process.”

As Abbas is not an Israeli citizen, Hirschson added, “he doesn’t have a right to live in Israel. We agree on that.”

In Gaza, Hamas denounced Abbas, saying he spoke only for himself. The Islamist movement does not recognise Israel and has regularly exchanged fire with it.

“No Palestinian would accept ceding the right of our people to return to homes, villages and towns from which they were displaced,” said Hamas spokesman Sami Abu Zuhri.

“If Abu Mazen (Abbas) does not want Safed, Safed would be honoured not to host people like him.”

Secret Palestinian memoranda leaked to the media last year showed that Abbas had, during talks with the previous, centrist Israeli government, been willing to concede on some core demands – including by accepting a cap on refugees admitted to Israel.

Under Netanyahu, Israel has campaigned for the hundreds of thousands of Jews who it took in from Arab countries after the 1948 war to be recognised as refugees, proposing they be seen as a demographic counter-balance to dispossessed Palestinians.