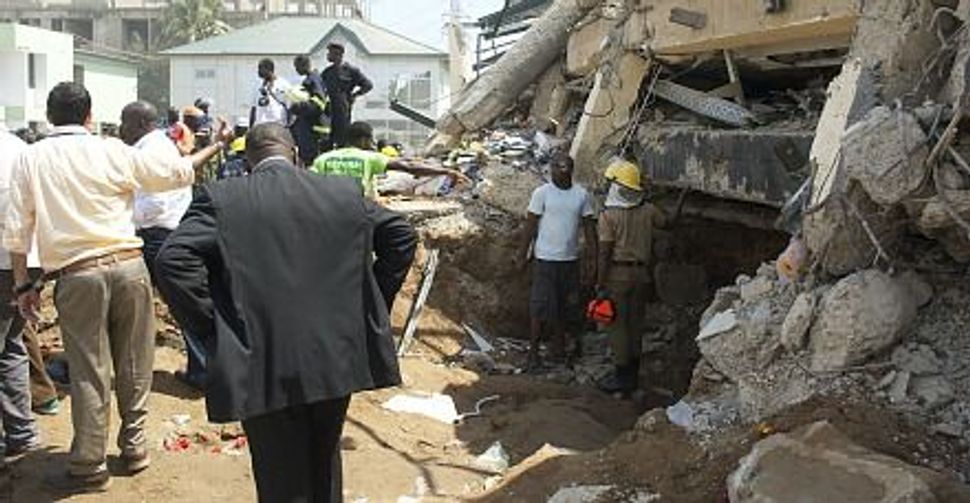 African Disaster: Bystanders gather around the rubble of a collapsed department store in Ghana?s capital of Accra. Image by getty images

More people than initially thought remain trapped beneath a collapsed four-storey department store in a suburb of Ghana’s capital Accra that killed at least seven people the previous day — and Israeli rescue teams were dispatched to help with the rescue, officials said on Thursday.

The authorities had initially estimated that around 55 people were inside when it collapsed due to a suspected structural failure, but that figure was based on the number of employees working there at the time and did not factor in the number of shoppers too.

By Thursday morning, emergency personnel had pulled out 61 survivors and recovered seven dead bodies from the building, which housed a mall operated by Indian retailer Melcom Ltd.

“It is now clear that more people were in the shop than initially estimated, and it is difficult to tell the actual numbers at this moment,” Kofi Portuphy, the head of Ghana’s National Disaster Management Organisation, told Reuters.

“Certainly the conditions of any survivors down there will be deteriorating and it is our hope to get them out as quickly as we can,” he said.

The ambulance service shuttling victims from the site to a local hospital said survivors had sustained injuries of varying seriousness.

Ghana’s President John Mahama on Wednesday promised an inquiry into how the building’s owner was able to circumvent the country’s building codes after it was discovered that its construction had not been approved by city authorities.

An assessment team of 18 Israeli experts was due to arrive in Accra on Thursday, the presidency said in a statement, with a further 150 Israeli rescue workers ready to deploy with field hospitals and concrete cutters if required.

“The Israeli team is expected to arrive in Accra by noon and will drive straight to the site with special equipment to help with rescue efforts,” Defence Minister Joseph Henry Smith told Reuters.

Running for election in December, Mahama cut short a campaign tour to visit the site late on Wednesday, promising that anyone found responsible for the tragedy would “pay the price”.

Accra is in the midst of a construction boom spurred by oil-fuelled economic growth, but building standards region-wide are generally poor and enforcement of such codes is often lax.

Melcom runs Ghana’s biggest chain of retail department stores and has some 20 shops nationwide. It said it rented the collapsed building and had opened a store there in January.