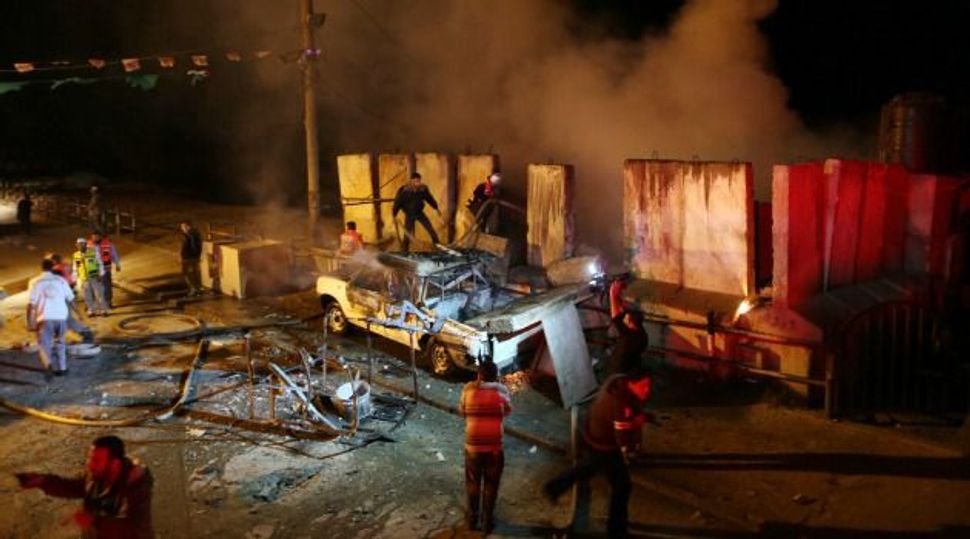 War Looming: Palestinians survey damage after a fierce round of Israeli airstrikes on Gaza. Image by getty images

A rocket fired from the Gaza Strip landed close to Tel Aviv on Thursday, in the first attack on Israel’s biggest city in 20 years, raising the stakes in a military showdown between Israel and the Palestinians that is moving towards all-out war.

Earlier, a Hamas rocket killed three Israelis north of the Gaza Strip, drawing the first blood from Israel as the Palestinian death toll rose to 19. 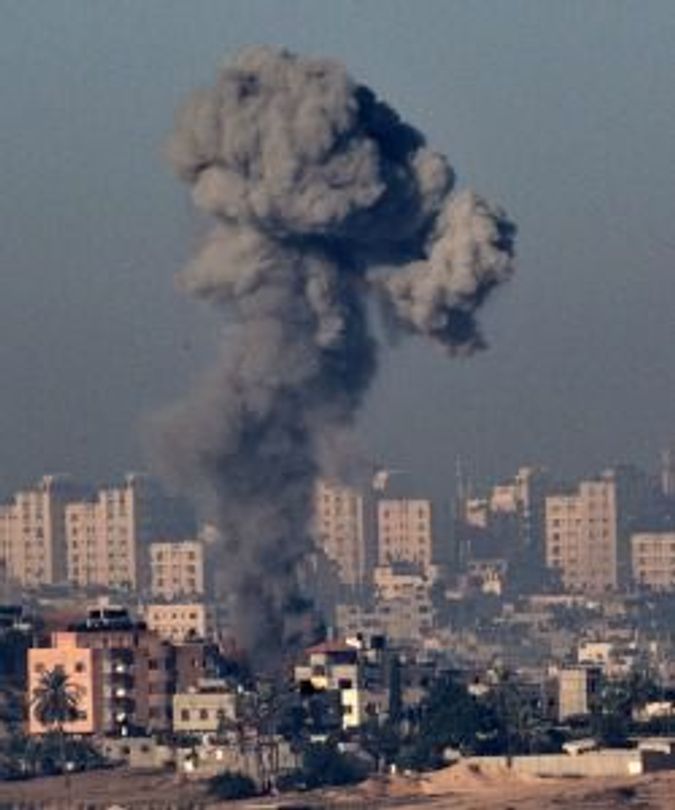 Plumes of smoke rise from Gaza after Israeli warplanes strike.

Defence Minister Ehud Barak, signaling stronger Israeli military action against Palestinian militants, said on Thursday they would be made to pay a price for firing rockets toward Tel Aviv.

“This escalation will exact a price that the other side will have to pay,” Barak said in broadcast remarks after rockets were fired toward Israel’s commercial capital in attacks that caused no damage or casualties.

An Israeli security source said one rocket, which triggered air raid sirens in Tel Aviv, landed in the sea. The military said another rocket fired at central Israel struck an uninhabited area in the Tel Aviv suburb of Rishon Lezion.

On the second day of an assault that Israel said might last many days and culminate in a ground attack, its warplanes bombed targets in and around Gaza city, shaking tall buildings.

Plumes of smoke and dust furled into a sky laced with the vapour trails of outgoing rockets over the crowded city, where four young children killed on Wednesday were buried.

The sudden conflict, launched by Israel with the killing of Hamas’s military chief, pours oil on the fire of a Middle East already ablaze with two years of revolution and an out-of-control civil war in Syria.

Egypt’s new Islamist President Mohamed Mursi, viewed by Hamas as a protector, led a chorus of denunciation of the Israeli strikes by Palestinian allies.

Mursi’s prime minister, Hisham Kandil, will visit Gaza on Friday with other Egyptian officials in a show of support for the enclave, an Egyptian cabinet official said. Israel promised that the delegation would come to no harm

Israel says its attack is in response to escalating missile strikes from Gaza. Israel’s bombing has not yet reached the saturation level seen before it last invaded Gaza in 2008, but Israeli officials have said a ground assault is still an option.

Israeli police said three Israelis died when a rocket hit a four-story building in the town of Kiryat Malachi, some 25 km (15 miles) north of Gaza, the first Israeli fatalities of the latest conflict to hit the coastal region.

Air raid sirens sent residents running for shelter in Tel Aviv, Israel’s commercial centre which has not been hit by a rocket since the 1991 Gulf War. A security source said it landed in the sea. Tel Aviv residents said an explosion could be heard.

“I hope that Hamas and the other terrorist organisations in Gaza got the message,” he said. “If not, Israel is prepared to take whatever action is necessary to defend our people.”

Hamas spokesman Fawzi Barhoum said Israel would pay a heavy price “for this open war which they initiated”.

After watching powerlessly from the sidelines of the Arab Spring, Israel has been thrust to the centre of a volatile new world in which Islamist Hamas hopes that Mursi and his newly dominant Muslim Brotherhood in Egypt will be its protectors.

“The Israelis must realise that this aggression is unacceptable and would only lead to instability in the region and would negatively and greatly impact the security of the region,” Mursi said.

The new conflict will be the biggest test yet of Mursi’s commitment to Egypt’s 1979 peace treaty with Israel, which the West views as the bedrock of Middle East peace.

The Muslim Brotherhood, which brought Mursi to power in an election after the downfall of autocrat Hosni Mubarak, has called for a “Day of Rage” in Arab capitals on Friday. The Brotherhood is seen as the spiritual mentors of Hamas.

The 15 killed in Gaza included Jaabari and six Hamas fighters plus eight civilians, among them a pregnant woman with twins, an 11-month old boy and three infants, according to the enclave’s health ministry. Medics reported at least 130 wounded.

At Jaabari’s funeral on Thursday, supporters fired guns in the air celebrating news of the Israeli deaths, to chants for Jaabari of “You have won.”

His corpse was borne through the streets wrapped in a bloodied white sheet. But senior Hamas figures were not in evidence, wary of Israel’s warning they are in its crosshairs.

The Israeli army said 156 targets were hit in Gaza, 126 of them rocket launchers. It said 200 rockets had struck Israel since the start of the operation, 135 of them since midnight.

Israel’s Iron Dome interceptor system has so far shot down more than 80 rockets headed for residential areas, the military said.

Expecting days or more of fighting and almost inevitable civilian casualties, Israeli warplanes dropped leaflets in Gaza telling residents to stay away from Hamas and other militants.

The United States condemned Hamas, shunned by the West as an obstacle to peace for its refusal to renounce violence and recognise Israel.

“There is no justification for the violence that Hamas and other terrorist organisations are employing against the people of Israel,” said Mark Toner, deputy State Department spokesman.

The U.N. Security Council held an emergency meeting late on Wednesday, but took no action.

In France, Foreign Minister Laurent Fabious said: “It would be a catastrophe if there is an escalation in the region. Israel has the right to security but it won’t achieve it through violence. The Palestinians also have the right to a state.”

Israel’s sworn enemy Iran, which supports and arms Hamas, condemned the Israeli offensive as “organised terrorism”. Lebanon’s Iranian-backed Shi’ite militia Hezbollah, which has its own rockets aimed at the Jewish state, denounced strikes on Gaza as “criminal aggression”, but held its fire.

Oil prices rose more than $1 as the crisis grew. Israeli shares and bonds fell, while Israel’s currency rose off Wednesday’s lows, when the shekel slid more than 1 percent to a two-month low against the dollar.

A second Gaza war has loomed on the horizon for months as waves of Palestinian rocket attacks and Israeli strikes grew increasingly intense and frequent. Netanyahu, favoured in polls to win a Jan. 22 general election, said on Wednesday the Gaza operation could be stepped up.

His cabinet has granted authorisation for the mobilisation of military reserves if required to press the offensive, dubbed “Pillar of Defence” in English and “Pillar of Cloud” in Hebrew after the Israelites’ divine sign of deliverance in Exodus.

Hamas has said the killing of its top commander in a precise, death-from-above airstrike, would “open the gates of hell” for Israel. It appealed to Egypt to halt the assault.

Israel has been anxious since Mubarak was toppled last year in the Arab Spring revolts that replaced secularist strongmen with elected Islamists in Egypt, Tunisia and Libya, and brought civil war to Israel’s other big neighbour Syria.

Cairo recalled its ambassador from Israel on Wednesday. Israel’s ambassador left Cairo on what was called a routine home visit and Israel said its embassy would stay open.

Gaza has an estimated 35,000 Palestinian fighters, no match for Israel’s F-16 fighter-bombers, Apache helicopter gunships, Merkava tanks and other modern weapons systems in the hands of a conscript force of 175,000, with 450,000 in reserve.